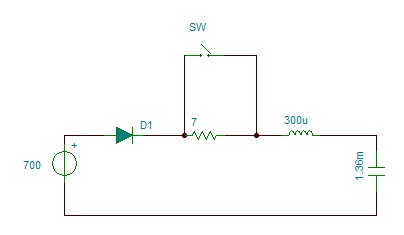 After 100 mSec, switch (SW) is going to bypass the resistor permanently. what should be the wattage of resistor? In image voltage source is of 700V, R=7ohm, L=330micro Henry, C=1.36mF.

Although most resistors just seem to have a power rating, that's not the whole story. It's a continuous rating, where the power input is balanced by its heat loss to ambient.

When you start using resistors for other than continuous use, you need two more ratings. There's the pulse power rating, which is a measure of what it takes to damage the resistive element. There's the pulse energy rating, which is a measure of the thermal mass of resistor forming the element, or in intimate contact with it, as heat has no time to be dissipated to ambient but must be stored in the body of the resistor. The pulse power will usually be orders of magnitude larger than the continuous power, for a robust resistor technology like wirewound. It may only be a bit larger for fragile technologies like thin film.

To get the pulse ratings, you usually need to dig into the manufacturer's data. It's often not obtainable for general purpose resistors. You can buy pulse-rated resistors. An alternative is to make resistors out of wire, or water. You know the construction, so you know heat is going to be uniformly deposited throughout the mass of the resistor, and you can work out the heat capacity from physics.

A couple of simplifications. Your circuit has an LC frequency of about 250Hz. This is far quicker than your 100mS gate time, so given the R damping you can pretty much ignore the inductor. The RC time constant is about 10mS, so in 100mS the capacitor will be fully charged. The energy lost in the resistor will be equal to the energy in the fully charged capacitor (it just is, no need for calculus).

Look at this data sheet for easily obtainable wirewound resistors. It says that for pulses between 100mS and 1 second, the larger sizes can be overloaded by a factor of 10x their continuous power. Below 100mS, you only have to observe the total energy, which for 100W and 200W resistors of 1 to 10 ohms is in the 200J to 900J range.

Not the answer you're looking for? Browse other questions tagged power resistors ratings or ask your own question.

2
Can I extrapolate the rated overload spec of a wirewound resistor to a joule rating?
4
Choice of heating element (power resistor)
0
Resistor wattage for HDMI hack
4
Rules for choosing power rating of a resistor
2
Difference between current and power
1
Power dissipation in triac driver optocoupler
3
Resistor Power Rating and headroom for AC circuit
3
power supply remote sense protection resistor value?
1
Options to protect Mobile Phone from over charging which is causing battery failure
22
What is the meaning of “ΩK” on a wirewound resistor?