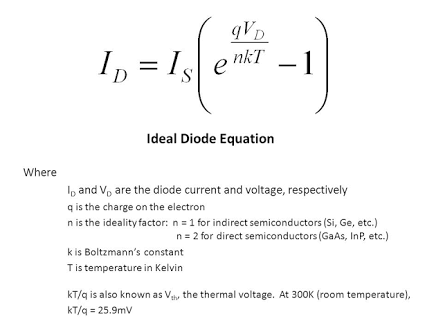 So I know how a diode works and everything. However when I stumbled upon this equation I just happened to have this silly doubt. Vd it says (in the equation) is the voltage across the diode. I know that every diode has a small potential difference and only when the applied voltage is greater than that voltage across the diode, electrons are able to cross the barrier.

There are various diode models of varying fidelty to reality and I think you are mixing two of them.

The model you describe as

I know that every diode has a small potential difference and only when the applied voltage is greater than that voltage across the diode, electrons are able to cross the barrier.

differs from the model given by the Shockley equation. So don't be surprised if you get incompatible results if you mix them.

The Shockley equation is more accurate because in reality a diode is not either on or off but it conducts already little bit below the threshold voltage and also above it current increases more and more.

See following i-vs-v graphs of diode models that get more and more realistic. Note that although they may give you different results none of them is totally "wrong" or "right" just more or less accurate. 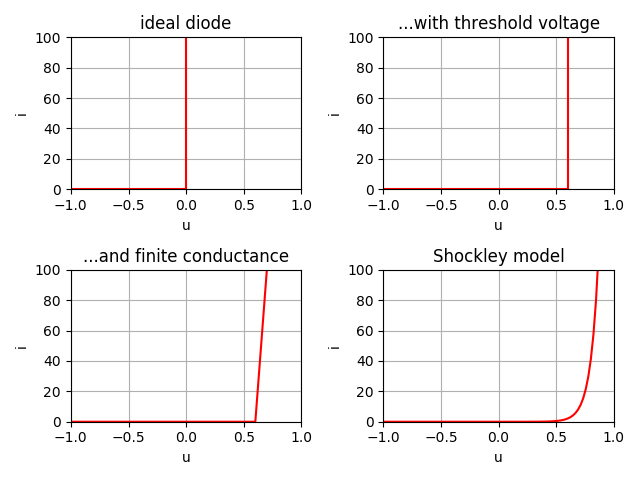 is the applied voltage same as the voltage across the diode?

Applied voltage is always the voltage across the device you apply it to. So this question doesn't make sense.

I guess you mean "Is the voltage across the diode the same as \$V_D\$?"

Now my question is : is the applied voltage same as the voltage across the diode?

In the equation, the term \$V_D\$ is the voltage that's across the diode's terminals. Note that you can either

For what it's worth, the commonly-used form of the Shockley diode equation (as shown in your question) does not make evident that

For the conditions mentioned above, Eqn. (1) predicts that as the diode's junction temperature T increases, the current through the diode \$I_D\$ tends to zero:

Therefore, we can conclude that the \$I_S\$ term a) cannot be constant-valued, and b) must be the term in the Shockley diode equation that causes the diode current \$I_D\$ to increase as the junction temperature T increases. In other words, the term \$(e^{(q\,V_D/\eta\,kT)}-1)\$ tries to decrease \$I_D\$ as T rises, and the term \$I_S\$ tries to increase \$I_D\$ as T rises, and for a given change in junction temperature \$\partial T\$ the following relation must hold if \$I_D\$ is to increase for increasing T:

For what it's worth, Eqn. (2) is a commonly used formula (model) for calculating the reverse saturation current term \$I_S\$ as a function of junction temperature T:

For more information here's a useful reference that provides descriptions for the terms \$I_K\$ and \$E_g\$ in Eqn. (2).

0
Why does placing multiple bridge rectifiers in parallel reduce the voltage drop?

43
Why isn't there a potential difference across a disconnected diode?
1
Diode built-in voltage and barrier voltage (forward bias voltage) are they almost equal? how do they relate to each other?
0
Minority Carrier Diffusions Equations in the derivation of Shockley equation
1
How does a forward biased diode conduct electricity?
2
Forward bias voltage across a pn junction diode
27
Why is the diode forward voltage constant?
0
Forward voltage across the diode
2
Does the Shockley diode equation apply to Schottky diodes and non-silicon diodes?