So, I want to know what the best way to visualize what is actually happening in a circuit. I typically visualized it with the Drude model, where the electrons are like free-flowing balls and the atoms of the circuit are fixed in space. It makes sense to think of voltage as being an application of an electric field across the wire that accelerates the electrons and resistance as the atoms in the way that the electrons hit. It also makes sense that when the electrons hit the atoms, some of their energy is given to the atoms and make them move faster, thus increasing their kinetic energy, and producing heat.

So, I like the Drude model, but it leaves a lot to be desired. For example, it makes no sense to me to think of electrons as "hitting" the atoms as the nucleus of the atoms are so far away from the electron cloud, it seems counter-intuitive as to why the two would "collide."

So, I just want a better model to visualize everything in my head. Which models do you use, and what are their advantages and setbacks?

The Drude model is not intended for 'visualising' what is going on.

The Drude model is a very good (for the time it was introduced) classical way of putting some equations onto what was observed, to try to understand what was going on numerically. As such, it gives plausible resistance predictions and handles the the change with frequency for many metals, but fails badly for sodium. It also makes a reasonable fist of some specific heats, though due to compensating errors that are in the order of a factor of 100.

How do you do 'better' than the Drude model? You can make it more like reality by introducing quantum mechanics, for instance Drude-Sommerfeld and the free electron model. That is much more successful than Drude, and certainly does away with electrons 'hitting' atoms, but no-one in their right mind would argue that introducing quantum mechanics makes something more intuitive (for me, visualisation implies intuitive, or at least classical).

One alternative is to crank the realism down a notch or three, and use the hydraulic model, which laptop2d has already illustrated, albeit briefly. You can push the hydraulic model a long, long way before it breaks. Specifically you can have inductors, capacitors, batteries and generators (we even have a hydraulic switch mode power supply, a boost converter, the hydraulic ram!)

You can't have realism and simplicity. Try to intuit how 'particles' like electrons behave, and one is already lost. For instance, an electron is not a billiard-ball-like particle, even in a system as simple as the hydrogen atom. Add another, and they interfere in wave-like ways. Add more, and an electric field, to a lattice of ions, and pandemonium breaks loose.

The best we can do is to have a 'magic fluid' that obeys certain more or less plausible rules. Whether you prefer water in pipes, classical electrons hitting atoms, electrons in bands being scattered by the lattice, or just plain-old 'conventional current flow' with no attempt at visualisation, is up to your taste. It's just the way the world is.

What I do, and from conversation most other engineers do as well, is to stick with a magical conventional electric current, which is a bit like water, and take the 'plausible rules' on trust. Occasionally, we have a crisis of belief, and take a peep over the wall of Drude and then quantum mechanics, to see if what's going on over there looks plausible, decide it's too complicated but probably sound, and come straight back to hydraulics and circuit simulators.

Unless you're the scientist designing the next semi-conductor material, so need to know about band-gaps, you can do electronic engineering never bothering about anything more than conventional current.

Current is the amount of water flowing through a pipe, voltage is the pressure and the restriction is like resistance. 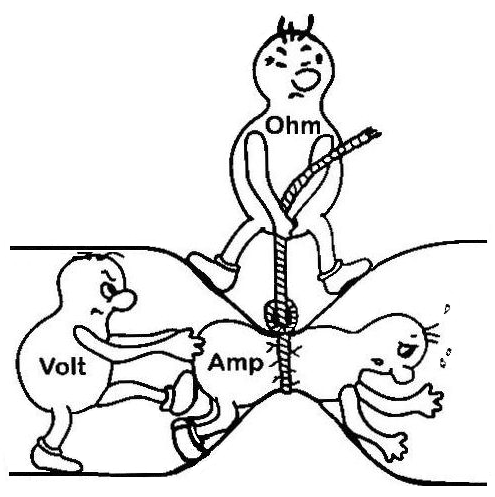 Perhaps it might be easier to consider a very thin wire, like quantum wire. Gold may be battered to a film of just one atom thickness. Quantum wire would thus have a diameter of just one atom and we can look at it as pearls on a string. The next step is to imagine what would happen if an electron strikes this string from the outside, just like a ball strikes a ball on Newton’s cradle, except that instead of a ball an electron is kicked out.

Not the answer you're looking for? Browse other questions tagged current resistance model or ask your own question.

5
Help with understanding Current, Voltage and Resistance
0
What is the best way to configure an electric fireworks igniter
8
Spot welder: High current advantage over high voltage
1
Is my understanding of current, voltage, and resistance correct?
0
Which is more efficient: A much larger than needed step-down voltage converter, or one rated closer to the actual load?
0
Fundamental Questions about Voltage and Resistance
0
Confusion with non-ideal current and voltage source models
0
What exactly is electric potential (what's wrong with my picture of it)?