Are the fuses required for a redundant power system, which takes power from a battery?

If yes, how to calculate the characteristics?

I am trying to isolate the faulty PSU, not the load. Load must have uninterrupted power. 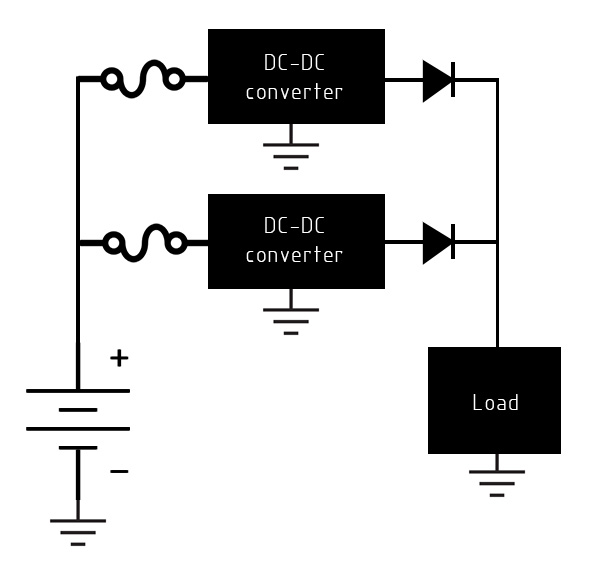 If you are using the schematic as depicted in your image, then if one PSU fails then its fuse will blow and the other PSU will take over. This is a good design.

Fuses come with ampere ratings, so if your load uses 1 A then you might want to use a 3 A fuse, this gives you a 2 A margin. And once something horribly goes wrong, say someone stick a wrench between positive and ground making tens of ampere to flow, then the fuse will blow. Or if something else happens, maybe some transistor breaks.

The more you know about your load, the better fuse you can use. Say your load has some decoupling capacitors, this means that every time you turn on your device, there will be an enormous surge current which might blow the fuse. For this you might want to use a slow fuse instead of a fast fuse.

We still don't know anything about what your load is. But let's say it is a computer with a 400 W PSU. And that your mains voltage is 240 V.

Not the answer you're looking for? Browse other questions tagged power-supply fuses redundancy or ask your own question.

0
Choosing Fuses or MCB in 24VDC vehicle circuit
9
Yields in DRAM and other Massively Redundant Processes
1
How to size wires and fuses correctly
2
How are OTP fuses in ICs implemented?
0
How to choose the correct fuse in a double paralled battery supply system?