I am looking for a cheap solution for sensing temperature with a MCU. My requirements are:

My starting point is two thermocouples with thermocouple amplifiers, but this seems to be overkill for my application. Thermocouples run at 10$ at Radiospares, amps at 5$ which would cost 30$ just to estimate a temperature.

What is a good direction to look for a cheaper solution. NTCs?

After stevenvh extended his answer to show the high degree of linearity that can be obtained with NTCs, I invested some time to reconsider whether NTCs are not a better solution.

I am not sure however that I am able to follow stevenvh in his reasoning on the error that can be obtained with NTCs on the cheap compared to semiconductor chips.

To get the temperature with an NTC the following functions come into play:

The error sources the I see are thus:

The error in the estimation of the temperature will thus clearly be dominated by the error of the ADV voltage reference and the errors in the resistor values. It will clearly be in excess of the 6%. The error due to linear approximation is utterly negligible as stevenvh pointed out.

It would appear to me that it is out of the question to beat this with an NTC without extremely careful calibration and performance verification. The uncertainty in the linearisaton resistors, the excitation voltage or the ADC each viewsed in isolation push the uncertainty of the NTC solution above this. Or do I have a major mistake in my reasoning?

At the moment I am convinced that NTCs can be a high-precision temperature sensing solution but on the cheap it would appear to me that their performance will be a shot in the dark.

1-2 degrees is an easy resolution (even when you mean accuracy, which is not the same!). I would consider LM75 and it various clones, or a DS1820/18S20/18B20/1822. Microchip has a lot of temperature sensors, including LM75 clones for < $1. The voltage output versions are cheap, but I would prefer a digital one.

I'd say NTC, yes. This one is the cheapest I could find at Digikey. About half a dollar, that's much cheaper than temperature sensor ICs, which have about the same precision. The advantage of an NTC is that it only needs a series resistor and an ADC input on your microcontroller, which most do have nowadays.

The low price has also a disadvantage: NTCs are anything but linear. You either have to use its transfer function (that's with an exponential in it, which you may not like, or use a lookup table, which for the given range may be the best solution.

I'm going to use the *103*MT* from this NTC series. First the transfer function:

Doesn't look promising, and indeed between 0 °C and 100 °C the curve looks like this: 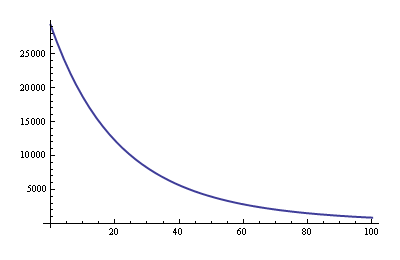 anything but linear, like I said. We can try to linearize that, but remember that we're going to make a resistor divider with it, and they're not linear either, so any linearization now will be ruined by the series resistor. So let's start with the resistor and see what happens. I have a 3.3 V supply and pick a 5.6 kΩ resistor to Vcc, then the output becomes 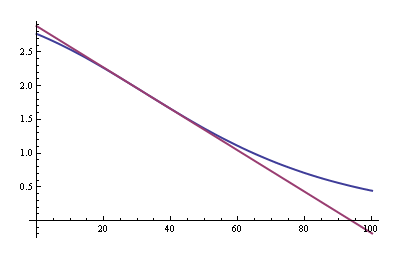 Not bad at all! The purple curve is the tangent in our range of interest: 30 °C to 35 °C. I could plot the graph zoomed in on that, but that gives us two coinciding lines, so let's have a look at the error: 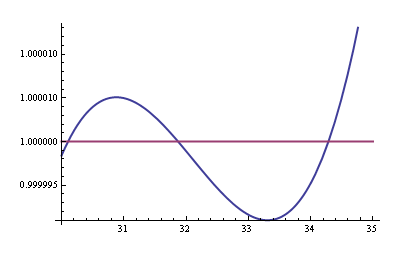 Doesn't look nice either, but you have to look at the vertical scale, which gives the relative error of the linear approximation compared to our NTC characteristic between 30 °C to 35 °C. The error is less than 15 ppm, or 0.0015 %.

Mathematica say the equation for our nearly perfect linear approximation is

I promised Arik to get back on the error calculation, but it's a lot more complicated than I thought, and it can't be completed because of incomplete data. For instance, I have very precise numbers for the coefficients in the NTC's transfer function (the 7 significant digits numbers are already rounded!), but no information on their accuracy. A few comments though.

Errors are not always expressed the same. Maxim's LM75 datasheet, for instance, doesn't mention minimum and maximum errors, but three-sigma and six-sigma values. On the other hand the Vishay NTC datasheet speaks of \$\pm\$ 1 % error. Is that six-sigma? Seven-sigma? Then it may turn out to be more accurate than the LM75, which is 2 °C accurate six-sigma, even 3 °C over temperature range. That's nothing to be ashamed of; few sensors will do much better without calibration. Question: how do you compare tolerance figures? And another one: how do you combine several bell curve functions to get a total error?

The PIC's ADC reference has a pretty bad 6 % tolerance. Arik says An uncertainty of 6% at 300 kelvin is equivalent to an temperature error of 18 K, which of course is preposterous and utterly absurd. I made a quick check: calculated the voltage divider's output for a temperature of 20 °C. Added 6 % to that, and calculated back to the NTC's resistance value, and the temperature that would be. The error is not 18 °C, but 1 °C, or less than 0.5 %, referred to 0 K.

Even so, the 6 % error is completely irrelevant! If you use the ADC's reference voltage for the resistor divider that voltage doesn't even appear in the calculations. I wouldn't care if the error was 50 %. Use another reference if the bad internal reference isn't available outside the controller. Like the 3.3 V power supply, or just any other DC voltage you have laying around.

The calibration is not what you want for a one-off project, but for mass-production it's no worry at all, and especially in consumer electronics, where every cent counts, you'll more likely find the NTC than an expensive LM75.

This sounds like a job for a thermistors, or two thermistors to be more precise. Since you only need to distinguish three different temperature states and you are only looking for relative temperature, you can connect the two thermistors together to make a single analog signal. That can then be measured with a A/D built into the micro. Most micros have A/Ds, so this won't cost anything more. I'd probably add a couple resistors and capacitors as a low pass filters to reduce noise.

One thermistor goes from ground to the analog signal and the other from power to the analog signal. You may need to do some calibration, but with your narrow temperature range and low resolution you don't need to get fancy. Probably just saving the zero-difference voltage and subtracting that from future reading is enough.

I'm a little late to the party.
As the answer will have been utilised by now I'll largely just outline an alternative method which has considerable merits but which seems to be surprisingly little used in discrete form.

This method is commonly used in IC temperature measurement ICs but still seems less known than would be expected.

If a silicon (say) diode is alternately fed with two known currents, the delta voltage change with change in current is related to the absolute temperature.

Note that this method is different to the usual method of measuring absolute diode forward voltage drop at a given current to infer temperature. This method is both substantially more accurate and does not require sensor specific calibration.

Accuracies of around 0.1 degree C (or K) are achievable.
Resolutions are dependant on measurement method.

The result is device calibration free.
The result is dependant only on the basic diode type (eg silicon, germanium)
eg if you use a sub 1 cent 1N4148 signal diode you can change this for another 1N4148 and get the same accuracies without recalibration.

The accuracy of setting the two currents used obviously affects result accuracy but as these can be chosen to suit available resources the results can be very good.

This method is used by some but not all on-die processor temperature measurement systems. You will usually find that where this system is used the technical descriptions are very light on detail and somewhat obfuscated - ie they seem to want to keep it secret even though the method probably dates back to work by Widlar in the mid 1960s.

This method rivals the accuracies achievable with reasonable care using NTC thermistors or PT100 etc Platinum resistors and similar, with a very competitive degree of complexity and difficulty.

This excellent 199 Analog Device sapplication note Measuring temperatures on computer chips with speed and accuracy claims the technique is a new one. I'm not at all sure that they are correct - but it is certainly useful and less known that would be expected.

From the above paper (slightly rewritten) for currents of I and N.I and diode voltage drop Cv1 at current 1 and Vd2 at current 2:

Very simple Temperature (Celcius) measureent with Thermistor (10K) B25/100=4300 I got inspired from the above comment read in this article. 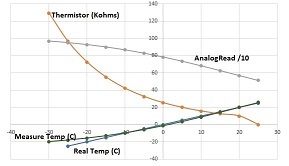 I'm using LM35DZ. Temperature ranged 0 Celsius to 100 Celsius, linear output and low impedance; I have been using it with direct connection to my PIC ADC input, works very well so far.

One unit cost around USD 3.

Very simple Temperature (Celcius) measureent with Thermistor ... at $1 each.

With all of that combined, you can use it as a very accurate temperature sensor - 12-bit adc, and sigma being just over 1 lsb - over a wide voltage range.

It can be also programmed as a dedicated tempearture sensor: mostly in sleep and wake up to read temperature and transmit data and then go back to sleep.

all of that for less a dollar in small quantities.

17
How to measure temperature using a NTC thermistor?
5
Choose the resistence with voltage divider sensor