I have a bunch of LED controllers which I am currently controlling over WiFi. Unfortunately, they are all rated for very small currents of about 2 Amp (ish).

Each LED Color gets driven with a simple N-Channel Mosfet as a low-side switch.

My question is: Assuming my N-Channel mosfet is properly rated, can I drive a load which is much larger with this setup? The PWM Generator symbolizes my LED-Controller, which should pull the Base of the PNP Transistor to Ground since it is just a low-side mosfet. The values of the resistors are all default, I am aware that I have to tweak them properly. The LED on the right hand side of the schematic is basically an entire LED-Strip with three LEDs in series and a huge amount of those three LED Groups in parallel.

The maximum current the LEDs should draw is about 6 Amps. I'm planning to use an IRLZ34N with heatsinks. Probably way overkill but I have plenty of those so... why not.

The default PWM Frequency of the controller is 1kHz but I'm thinking about patching that to a higher frequency. I know the chip supports it and right now my power supply gives of annoying high pitched noises even though it is a name brand. The accuracy of the PWM signal isn't critical at all, it's just for some ambient lights. Since I want to dimm them properly, the dynamic range of the duty cycle is very high, so basically 0-100%ish. Usually I won't run them close to 0%. The brightness isn't linear so everything below 40% is almost like switching them off completely.

Everything has a common ground. 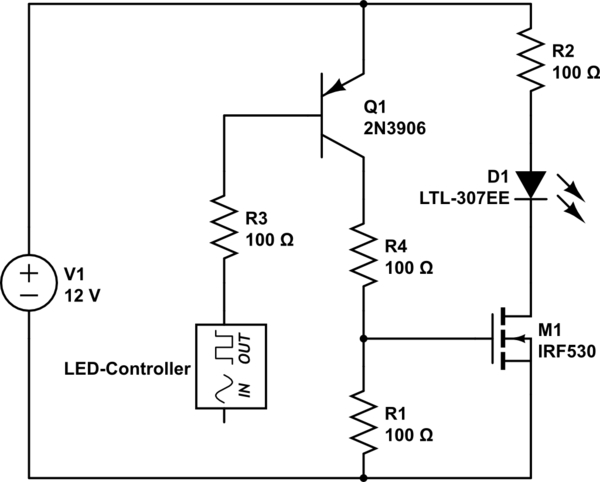 If the MOSFET is up to the job and bolted to a big enough heatsink, it should work fine.

The series resistor R2 will need to be adjusted (probably way below 100 ohms). Make sure the resistor won't be fried as well. Use a high enough power one, maybe with a heatsink of its own.

There's no reason why a modest increase in PWM frequency won't work either.

One thing you should at once check is the current rating of the diodes you are using. I can see as per datasheet at the fs of 1kHz datasheet it is around 120mA per diode for 10%Duty, if you want 40%Duty safer would be 30mA limit. As per datasheet and schematic you will be operating the FET in linear region. Taking the above points into consideration, first

You should consider what is the maximum load you want, calculate the current as per the load. Place as many diodes in parallel to accommodate this current!

Not the answer you're looking for? Browse other questions tagged led mosfet pwm led-driver or ask your own question.