First time posting on this, so apologies if I mess anything up. I'm having an issue with my circuit that I'm having difficulty figuring out. I am using a TIP120 transistor to turn an LED on/off. The LED has a max operating current of 1A. I'm using a 1A buckpuck LED driver to power the LED, and this is a diagram of what my circuit looks like (wasn't sure what to do with the Arduino, sorry, so I just subbed in a voltage source): 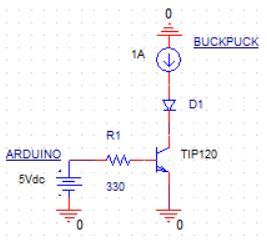 The LED turns on and off when it's supposed to (I'm using an Arduino output pin connected to the TIP120 base through a small resistor). However, the brightness of the LED will sometimes start off very low, and over time (30s to a couple minutes) ramp up in brightness. I'm not sure what is causing this delay- I've tried with multiple LEDs and the behavior is the same, so I don't think it's that. My guess is that somehow I'm messing up the transistors?

I've linked to the product info for the buckpuck I'm using: http://www.luxdrive.com/content/3021-BuckPuck.pdf

Hopefully I didn't miss anything, would appreciate any advice. Thanks!

This is the buckpuck configuration I'm using, with an external pot and a switch to control intensity. Without the transistor, this circuit works as expected. However, as soon as I add a transistor in the configuration posted above, the LED intensity becomes unreliable. The LED- terminal of the buckpuck is grounded, while the LED+ terminal of the buckpuck leads to the anode of the LED, and the cathode of the LED is connected to the collector. 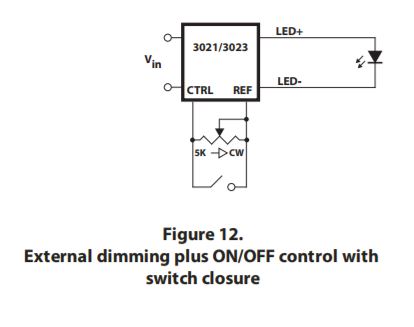 If it helps, this is a screenshot of my Eagle schematic showing some more of the connections. I will try to make a more complete diagram once I have a mouse again. The LED560 label on the base connects to an Arduino GPIO pin via a 330 ohm resistor. 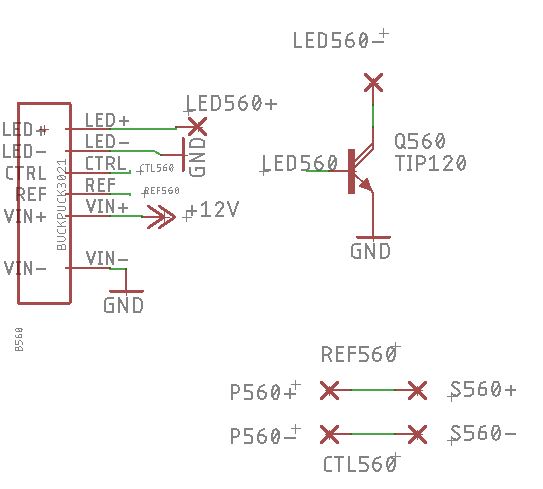 Thanks everyone for the quick answers. Configuring the circuit as in Figure 13 of the buckpuck datasheet works, and I now understand why it was a bad idea to use the TIP120, especially since the buckpuck driver already allows for logic-level control.

The LED wires should not be connected to anything other than the LEDs. You're interfering with the current sensing most likely, and opening up the connection to a current source will (at best) result in triggering protection circuitry designed to prevent overvoltage.

Your schematic does not match any of the suggested schematics in the datasheet.

The buck regulator must have Vcc and Gnd connected all the time and use the control pin in any way that it is suggested for proportional or on-off control.

READ the datasheet until you fully understand each pin and terminate with the required connections. You don't need a TIP120 to control it, only 0 to 4.2V on the control pin.

Not the answer you're looking for? Browse other questions tagged led bjt brightness or ask your own question.

3
How to make LED bar graphs to measure intensity
4
Choosing an LED
3
Ideal constant current source?
2
Controlling 10 high power LED with a Raspberry Pi
0
PWM led controller
0
Keep individual LED brightness steady when other LEDs are added or removed
2
LED brightness stability issues - how to fix?
1
How can I make a 16x16 led pannel without losing the brightness intensity of each single led?
0
LED intensity issues on Attiny85 with 74HC595 to control 8 LEDs