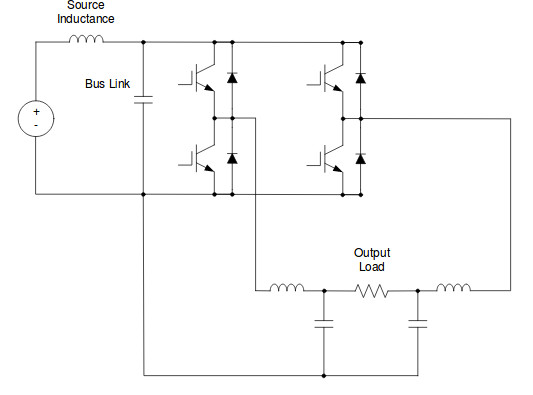 The formula I found in order to calculate required bulk capacitance is:

This is a attempt to answer part of my own question:

To calculate the capacitor ripple current for a given duty cycle D, [0, 1], we first determine the voltage across the load by calculating the voltage on each side of the bridge and subtracting one from the other:

Then determine the current trough the load:

Since the filter inductors are in series with the load, the average inductor current equals the load current.

Power on the load:

The difference between the current supplied by the power supply and the load/inductor current has to be supplied by the capacitor(s), during the active part of the period:

The resulting current ripple is a square wave, we need to determine the RMS value which is of importance for electrolytic capacitors:

Have a computer do all the work for each duty cycle in 1% steps and you get something like this, from which you can easily determine the peaks: 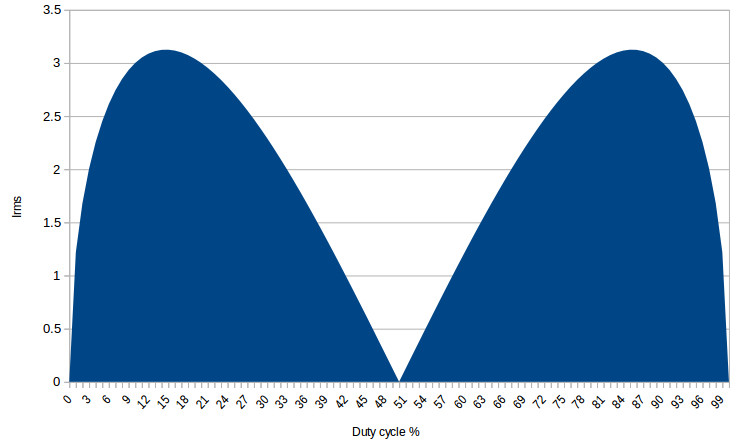 One way to estimate is by allowing certain dV ripple and taking T/2 time into CV = It equation. This way you can see how much energy can be provided by the capacitor given the source cannot provide anything in reasonable time.

Of higher importance is the loop inductance. You don't want resonance at the chopping rate.

Not the answer you're looking for? Browse other questions tagged h-bridge switching decoupling-capacitor or ask your own question.