Is there an actual need for the concepts "emf" and "back emf"?

Given a two-terminal element where you can only measure the voltage across terminals \$v(t)\$ [\$v_{ab}(t)\$] and the current \$i(t)\$ defined as entering the positive [a] terminal, there doesn't seem to be a need to introduce concepts as "emf" or "back emf".

Furthermore, in actual use there seems to be inconsistencies in the sign of these elements. For instance, in an inductor, it is well-known that \$v_L=L\frac{di_L}{dt}\$. This page gives such an expression for a solenoid (with a value of L as a function of its parameters) before talking about "back emf". However, under the title "back emf generated by an inductor" we find the sign changed \$V_L=-L\frac{di_L}{dt}\$.

So, what's the point of using the "electromotive force EMF" which, according to wikipedia is "the electrical intensity (!) developed by a source" instead of voltage?

Why is there a need to introduce "CEMF" defined, according to wikipedia "the EMF caused by magnetic induction"?

Wouldn't it be reasonable to just use the only variables which can be measured in practice, \$v(t)\$ and \$i(t)\$?

With two identical coils wound around a magnetic core when you apply a voltage to one coil, the same voltage appears across the terminal of the other coil. This is because the primary voltage sets up a current that induces the same voltage in the secondary coil: - 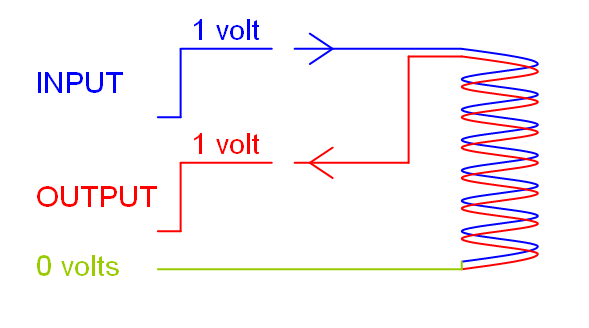 We don't normally call that secondary voltage a back-emf (or CEMF as in counter emf), we call it an induced voltage.

The current produces a magnetic flux and, if the two coils are identically wound and tightly coupled, we say that the magnetic flux 100% couples between the two coils. That flux (or rather the rate of change of flux) induces the secondary voltage.

After all, when we make an inductor we know it doesn't behave like a short circuit (despite it being made of virtually zero ohm copper wire) so the back emf opposes the driving voltage and is virtually identical in amplitude to it. This then raises the problem of "how can current flow in an inductor" and, if you delved into the physics (beyond this site) you'd conclude that the rate of change of current in an inductor is caused by minute differences between applied and back-emf.

Is there an actual need for the concepts “emf” and “back emf”?

I'd say yes but would also add "induced emf" to the list.

Not the answer you're looking for? Browse other questions tagged voltage current back-emf emf or ask your own question.

4
Harvesting Back EMF Possible?
0
What is the path taken by the back emf current?
2
Back EMF of DC motor - protection
1
Inductors and back EMF
7
"Where" does back EMF appear in motor?
0
Back EMF of an H Bridge
0
EMF and voltage on inductor
8
Why does analysis indicate that ground lifts do not fix ground loops?