How to desolder a BGA 153 eMMC chip

For data recovery I need to desolder a BGA 153 eMMC chip from a dead phone. I'd like to maximize my chances of NOT destroying the eMMC chip in the process (the other remains of the phone do not matter since these are dead already). I've already watched various instruction videos and I'd say I have an idea of the general process.

I do have a cheap Chinese hot air station where the temperature can be set between 100-500 degrees Celsius (but I don't know how accurately that actually works) and where air speed can also be selected.

For target practice I just unsoldered some DDR3 chips from some old PC's memory PCB (these chips where not glued on - it was just the solder that held them in place). I used a nozzle about the same size as the chip and put flux all around the chip before heating. I always used a low air speed (2 on a scale to 8). I progressively increased temperature and each time heated for 2 minutes to test at which minimum temperature the chip would come loose. For the DDR3 chip it actually took me 385 degrees celsius (but maybe the displayed temperature is just wrong)!

With regards to the eMMC chip I had so far found information that 240 degrees should be sufficent to unsolder it (supposedly its solder melts at 225 degrees).

Is it to be expected that an eMMC chip would come off at a so much lower (240 instead of 385) temperature than a DDR3 chip? Or is this just an indication that the temperature reading on my hot air station is way off?

Should I rather be using some higher air speed for this kind of job?

Would it make sense put some thermal isolation on the backside of the phone's PCB to reduce heat emission?

What type of low melting point solder should I use if I wanted to directly solder some wires to the eMMC chip? Or what would be the right type for reballing (leaded, lead-free, etc) if I was so put it onto some kind of breakout board?

The easiest and less destructive way would be to turn your board upside-down, and heat the chip area from the PCB side. Use some powerful heat gun instead of a tiny hot-air pencil. As soon as the solder temperature gets to the soften/melting point (which you don't know and shouldn't guess), the chip will fall down by itself, maybe with a little help.

You can't afford re-balling, plus you will need to develop a PCB interposer for the BGA with breakout pins, etc. Best way would be to use a very thin magnet wire, AWG36 to AWG40, and break the connection to some DIP-40 socket, or something. Solder 60/40 would be just fine, if you have a 10X stereo stand and fine-tip soldering iron.

ADDITION: Here is your other option without soldering the chip back: 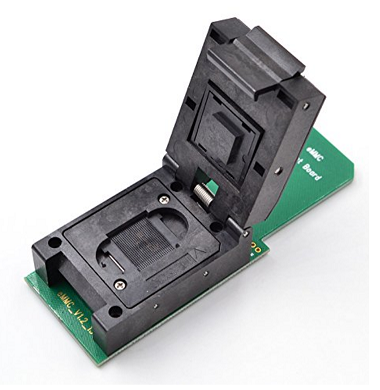 You just need to clean your eMMC thoroughly.

The big danger, regardless of your method, is getting your chip too hot for too long. You don't want to pump enough heat through your IC to heat up the PCB beneath it.

One good solution is in @AliChen's answer. Another method is to preheat the whole pcb (from underneath) to just under the solder melt temperature. Then you can add heat to the IC with your hot air station and remove it with tweezers.

I would recommend an IR preheating station. If you don't have one, you'll have to decide if your data is worth the investment. You can probably find a new cheap one for under $100 USD.

Here's an example image from AliExpress. I haven't used this one, so I can make no recommendations: 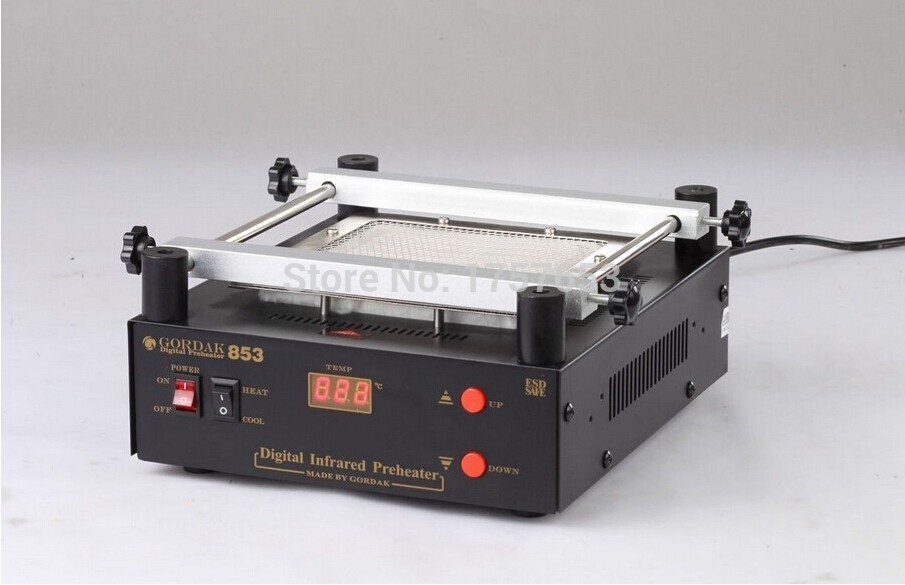 By the way, you certainly don't want your IC hot enough to melt solder for two full minutes at a time!

Not the answer you're looking for? Browse other questions tagged soldering bga or ask your own question.

2
Need recommendation for a first hot air station
12
What mad solder type is used for BGA?
1
Solder bridging when reflowing QFP
0
Is it possible to desolder the bond wires by overheating a chip?
0
Why is solder not sticking to the PCB pads after using the hot air gun?
2
BGA VCC and VSS shorted after desoldering
4
Is it possible to hand-solder a BGA without solder balls
0
How to stop frying components with my rework station?
0
Need some tips on using hot air soldering station for my project