I've looked several of these "DIY spot welder" videos on Youtube, such as this:

But shouldn't the power be the same? The power is the product of current and voltage. Because of conservation of energy, as the current is stepped up, the voltage is stepped down as the product stays the same.

In the opposite case where we step up voltage I can understand what's going on by looking at the transformer model:

If the secondary coil number gets higher, the current to the R_s branch gets higher. So even though the current is stepped down, the power used becomes higher as we are "pulling" more current from the supply.

But what happens when the current is stepped up? If the primary has more turns, it would seem that the ratio N_p / N_s is higher and the current to the R_s branch is lower.

Could somebody explain to me what is it that I'm misunderstanding? Why is it better to step up the amperage, rather than just use the input AC voltage or step up the voltage instead of the current?

EDIT: A lot of the answers state the relation between current, resistance and power:

But we also know that the voltage across a load is also a function of the current, by Ohm's law:

So if we have a high current, we should have a high voltage as well. Now Ohm's law and transformer seem to disagree!

There's a sweet spot for each system. That's where they're trying to aim. In the case of a welder, that sweet spot involves a step down to low voltage and high amperage.

Also, if you have any control circuitry, controlling the amperage is better than controlling the voltage here. The voltage drop of the system comes from all sorts of wires and connections. The resistance of the system, for instance, can drop if you connect more metal surfaces together with good solid welds. This means that, if you control voltage, you have to pay attention to all of these details, when all you really cared about was "power in the weld." If you control amperage instead, then your power dissipation in the weld is always \$P=i^2R_{weld}\$, and it ignores all those other details. Thus, it is helpful to think in current terms.

When it comes to welding the gas impedance is high until a low current HV arc begins then the low voltage high current power source provides the follow on current into the low Z.

Z is inverse to current density which is needed to raise heat in the joint from \$Pd=I^2R\$.

So you cannot weld with low current high voltage, as the arc resistance becomes very low. The HV is just the trigger like an SCR. Both have negative incremental resitance.

Judging by our conversation in the comments the bit you are missing is that stepping down the voltage performs two functions: 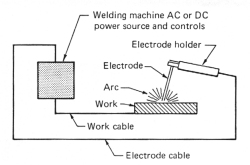 It may help to approach the problem in reverse. Starting at zero volts you increase the voltage until the current rises to a value sufficient to create the weld. To do this you need a transformer. The transformer makes the conversion from high to low voltage and low to high current. For our 120 V to 5 V, 100 A example the primary current would be only \$ 100 \frac {5}{120} = 4.2 \ \mathrm A \$. This is readily available from a wall socket.

This is opposite to power transmission lines, where you want as little loss as possible in the line, and so step up to a high voltage and low current.

You are missing a key point with your theory here. In order to reach the temperatures required you need to inject sufficient power to do so.

The weld spot has a very small resistance. \$<10m\Omega\$

Since the weld point has such a low resistance you do not need to apply much voltage across it for it to conduct LOTS of current. If you used a higher voltage, the join would conduct proportionally more current. Double the voltage, the current doubles too, and the power you are putting in goes up by four.

(Well actually the extra power you add would change the resistance so it is not exactly double the current.)

The point is, you need to be able to supply the current the join will consume no matter what voltage you use. Increasing the voltage makes the current demand larger, not smaller.

The trick is to use a low enough voltage that the amount of current conducted through the join produces just enough \$P = IV\$ to heat and melt the metal in a reasonable time. The transformer then needs to be designed to balance that much voltage with that much current.

Or to put it another way. The amount of voltage and current you need is dictated by the resistance of the join. It just happens because of physics that it works out you need a small \$V\$ and large \$I\$.

Here is an interesting paper on spot welding.

Since we're talking spot welding and not arc welding it's all about I^2R (the power) delivered to the load. If you plug your spot welder into (for example) regular US outlet with a 20A breaker and you don't step down the voltage with a transformer the maximum current you can get before you trip the breaker is 20A. (Don't do this, it's unsafe.)

Of course there are winding and core losses, etc, but that's the main idea behind low voltage high current spot welding.

If the voltage is very high, you'll get an arc when the welding rod is still quite a ways away from the work pieces. The end of the rod will (probably) melt, and the work piece may melt where the arc contacts it--but they won't be close enough together for the molten welding rod to be deposited on the work piece, so you end up with a weak weld at best (and quite possibly none at all).

Another problem with a long arc is that it's not very predictable--if you've ever seen a movie of a thunder storm, you'll notice that lightning tends to strike the tallest thing in the vicinity--but it doesn't always. Sometimes it strikes one place, then mid-strike, it hits somewhere else instead.

Even with a really short arc, this still happens to some degree, but the distance that the arc moves will tend to be very small, so you still get the heat concentrated right around one area, so you can get a good weld.

Bottom line: I'm not at all sure this really has all that much to do with electronics; it's more about how arc welding works.

For what it's worth, when I was much younger, I happened to be around when a friend decided to hook the output from an AC welder up to a coil from a car. It produced about 3 or 4 foot long sparks--but I'm pretty sure nobody could have actually welded anything with it.

The issue here is that, in practice, there is a limit to the current that the supply can deliver. It is also important to distinguish between what are causes and what are effects, or, in other words, to identify the dependent and independent variables - for one thing, this should clear up the issue raised in your addendum.

Assuming a fixed workpiece resistance, an ideal fixed-voltage power supply (up to its maximum current), and a perfectly-efficient transformer etc., the dependencies are thus: The supply voltage \$Vp\$ and transformer turns ratio \$N1/N2\$ determine the secondary voltage \$Vs=Vp.N2/N1\$, which, together with the workpiece resistance \$Rs\$, determines the secondary current \$Is=Vs/Rs\$, which in turn, together with the transformer ratio, determines the primary current \$Ip=Is.N2/N1\$. The maximum current that can be drawn from the supply (or the maximum current the transformer primary can take, whichever is smaller) is another independent variable.

Consider your statement “If the secondary coil number gets higher, the current to the R_s branch gets higher. So even though the current is stepped down, the power used becomes higher as we are ‘pulling’ more current from the supply.”

Excluding the clause 'even though the current is stepped down', which is probably not the case, then the rest of this statement is correct, as far as it goes: increasing \$N2\$ increases the voltage across the load, and therefore also both the current through it and the power dissipated in it. For example, if \$N2\$ is doubled, \$Vs\$ is doubled, leading to \$Is\$ also being doubled, so the power dissipation is quadrupled. The consequence is that the primary current draw is quadrupled, as can be seen either from the conservation of energy applied to the primary and secondary circuits, or from the transformer relation \$Ip=Is.N2/N1\$, where both \$Is\$ and \$N2\$ have doubled. When adding more secondary turns, however, it is not long before the primary current reaches its limit.

So, you are correct to say that increasing the secondary turns will increase the power delivered to the workpiece, but only up to the point where you begin to overload the source. In practice, if you apply your source voltage of 240V directly to the workpiece, you will almost certainly overload the supply, in which case you will need a step-down transformer simply to stay within that limit. To deliver the most welding power, you need a transformer that does the least voltage stepping-down while also keeping the primary current within its limit.

Note that to understand this issue well enough, you do not have to consider the parasitic impedances shown in the diagram, which are comparatively small and merely complicate the matter without adding any insight. On the other hand, as others have mentioned, there will also be dissipation in the secondary windings, so you need to use wire of sufficient diameter to handle the secondary current - at least sufficient to avoid overheating, and beyond that, the lower the resistance of the secondary, the less power will be dissipated there rather than in the workpiece. If the maximum current for the primary circuit is \$Iplimit\$, the corresponding secondary current is \$Iplmit.N1/N2\$. If, as in the video, you are modifying an existing transformer, the maximum power of your welder may be set by the the physical limit on the number of turns of large-enough wire that you can fit on the transformer armature.

Another issue is safety - you may be able to weld with a higher voltage, but you significantly increase the risk of injuring the welder too.

Not the answer you're looking for? Browse other questions tagged current transformer model or ask your own question.