Will this MOSFET Work in this circuit?

I have designed printed circuit board for a project that requires a (logic-level) MOSFet controlled directly by an AVR micro at 5 volts feeding a step-up transformer. The boards have already been completed. I had originally used a MOSFet I stole off a reference board and tried to source it from a Chinese factory. This was my mistake as I can not source this MOSFet any more. I've been trying to find a drop in replacement from Mouser. I think I may have found one but I want to be sure.

Update: Looking through some stuff, I'm feeling comfortable with the second replacement part I posted (The BUK9880) I also read in the data sheet the minimum and maximum gate voltages were between 1 to 2 volts. So I chose to change the voltage divider values to 10K ohm for R15 and 5.1K ohm for R16. I have yet to do any testing on the board, I just got it soldered up. Can anyone confirm if running this without a Piezo element attached would release the magic smoke from the MOSFET or the coil? and if so, why and also how can I put a dummy load on it to test?

This is the original part PA110BDA Datasheet PDF

EDIT: I've been made aware that the replacement I originally choose may not be able to handle to switching frequency needed. I looked again and this is the closest thing I could find in the required package type. BUK9880-55A Datasheet

This is the way the board is designed; (NOTE: R17 is actually a 330uH inductor, I used the wrong component in the schematic.) 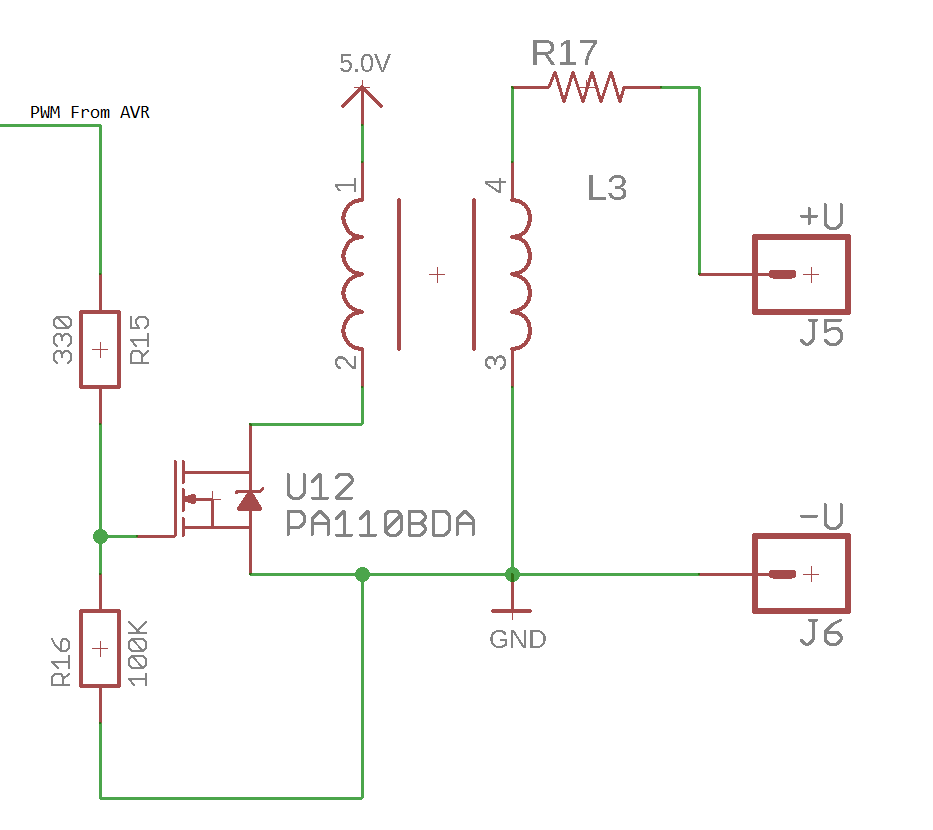 The circuit uses a PWM signal from the AVR to drive an ultra sonic transducer at around 113khz with a supply voltage of no more then 5 volts. current draw is negligible at less the 600ma but I'm sticking to the reference design used for the driver with similar MOSFet values.

The MOSFET shall have enough low gate threshold voltage - aka logic level MOSFET. The replacement is more likely a MOSFET solid state switch, it may not reach such high frequency - check out.

But what is also weird is the transformer circuit. If there is no load connected, it may blow - transformer or transistor.

Alright, After a lot of research and tinkering on my scope. I have decided to use the BUK9880-55A MOSFET with a pull down resistor on the gate of 10Kohm and a 1Kohm resistor between the AVR pin and the gate. This seems to work fine.

The Pull down resistor insures that the Mosfet turns completely off at the frequency needed.

The MOSFET chosen appears to have the closest specifications to the original part found on the reference board.

I can now see proper wave forms on the scope on both the logic side and the load side. My only issue now is getting the correct resonance frequency generated on the AVR without errors or jitter. I appreciate everyone who has tried to help.

Not the answer you're looking for? Browse other questions tagged mosfet avr component-values or ask your own question.

1
Is this switching power controller compromise wise?
2
How important is td(on), (off) and tr rise/fall. How close do they need to be for a primary side mosfet
0
Power Mosfet - Unreliable High Speed Switching Behavior
3
Power MOSFET or Relay
0
irf3205, did i kill it?
2
Will this MOSFET switch circuit work?
0
Ic driver for a N-channel MOSFET
0
Voltage spikes in MOSFET circuit
1
Why do my mosfets keep breaking/ dont work?
0
ATTINY84 cannot get PWM to work at all