This question is in essence about integrating the switch. I do know that relays are an alternative to CMOS switches, but at approximately 5 to 10 times the cost they are not really an option in this design.

There have been fine questions with sensible answers about op-amp circuits with (switchable) variable gain, e.g. here. This question is not about this issue, as the title suggests. But bear with me and let me elaborate on it as an introduction.

Consider this circuit with variable gain: 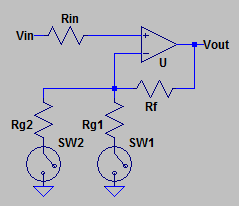 The position of the switches in this circuit is perfect. They are at ground level, so no offset influences the switch resistance. As a result, in this position the switches do not generate modulation distortion.

Now to the real core of my question. Here are 4 different possible configurations of input multiplexing and none of them come close to the ideal configuration above of the variable gain solution. 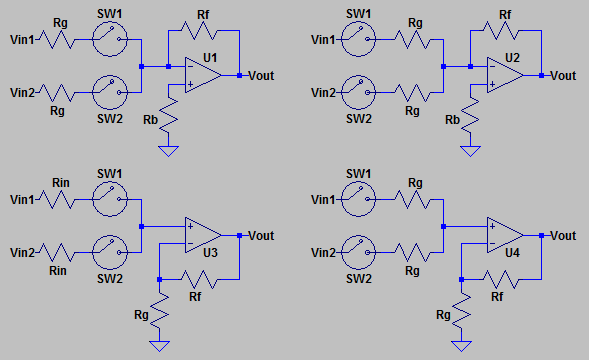 The circuit around U3 is there for completeness, but it's the least sensible.

In the circuits around U2 and U4, the switches see a variable voltage level and that will lead to modulation distortion.

The circuit around U1 has the switches at virtual ground, but the position of them is also at the inverting input pin. I have implemented this in the past and from experience, this layout leads to high noise sensitivity. I'm not talking about inherent noise of the circuit, but noise from the surrounding electronics.

My question is if anyone has experience with the best trade-off that can be made, or can suggest any tricks that can circumvent the disadvantages summed up here, or can suggest a clever, different schematic that achieves the same goal.

In the answers and comments, several aspects of the main issue were touched. In essence, I was asking about the best topology and it has drifted towards switch properties (on-resistance, on-linearity, off-capacitance) and side effects of the mixing configuration (node charging resulting in plops when switching), crosstalk,...

I'm well aware of all these issues and I might have oversimplified the question in favour of clarity and focus.

Andy aka has raised valuable considerations that I will pursue further, but the solution suggested is exactly as I've done in the past, with less success than I hoped for.

τεκ raised a simple but interesting alternative that I'll also look into.

My intermediate conclusion is that I'll try to get hold of the Douglas Self audio book. I'll be digging into switch and FET properties and try to simulate their effect in the different topologies. That might lead to new insights and I'll report back. I'll definitively be prototyping different solutions in the end. So it might take some time, but I'll come back with new insights and report back. 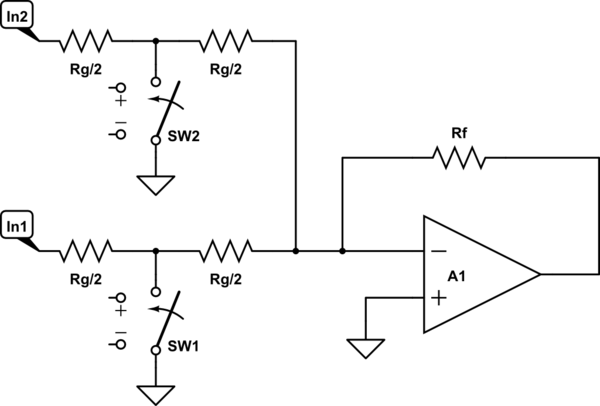 One aspect you haven't considered is that with an inverting mixer, the mixing node is a virtual earth hence, you "mix" input currents and each input's current "sinks" into a virtual earth. This provides one major benefit: -

In other words, an input signal hardly\$^1\$ gets its signal-current messed-with from other inputs signals. This does not happen on the non-inverting op-amp mixer because the signal levels depend on each other and the source impedances of other signals connected this way. This then leaves U1 or U2 as the main contenders: -

In a mixer like this, the mixing-node suffers a lot from all the inputs being connected to it so I would go for the circuit that uses U1. Yes, there will be more capacitance to ground at the mixing-node and this will cause high frequency noise but so will having a bunch of inputs and that is a problem faced by all anlogue mixers so, choose an op-amp with low input noise voltage density and be prepared to add a parallel capacitor across Rf.

You must also remember that at high audio frequencies, analogue switches are not open circuits and some high spectrum noise from an input that is deemed to be turned-off may still be heard.

\$^1\$ I used the word "hardly" because with an op-amp there is finite (and not infinite) gain and the virtual earth summing point becomes a slight abstraction. This means that the virtual earth can be at a few mV p-p and at higher frequencies (where the op-amp open-loop gain reduces) it might be 10 mVp-p for example. It's still a lot better than the non-inverting summing node of course.

NE5532 is the actual opamp I've used. Don't mind the FET in the schematic. I've tested with several FET's ranging from Rdson = 40 mOhm to 10 mOhm and crosstalk is only acceptable for 10 mOhm FET's. Those are easy to find though. Mind they need to be fully open with 4.5V since I want to control this from a µC with 5V tolerant open collector outputs.

This design is a comprimise between noise and crosstalk. resistors all scale simultaneously and it's R13 and R16 versus Rdson that determines crosstalk (leaking) while it's also R13, R15, R16, R18 that determine thermal noise. The change from 1k ohm to 2k ohm is clearly audible.

This obviously cannot work for DC coupled systems, everything is mid-rail biased in function of the FET's.

Very good mid-rail decoupling is extremely important in order to have no influences from surrounding circuits.

But the above schematic with all it's tweaking multiplexes without any audible distortion, with absolutely minimal noise and crosstalk.

In case anyone wonders, R14 and R17 are there in order to define the voltage at drain of the FET's. Otherwise this voltage would depend on leakage of the coupling capacitors.

Do mind that this multiplexer version has one major disadvantage that is difficult to solve: the output plops immensely when closing any of the FET's. This is because the DC bias is disturbed by pulling FET drain to ground. This transitions through the coupling caps before reaching a new equilibrium. But it is a non-issue in my application as outputs will be digitally muted briefly during multiplexer switching.

For price I can't imagine there are better alternatives, the drawbacks are manageable, while noise and sound are top notch.

Not the answer you're looking for? Browse other questions tagged operational-amplifier noise distortion cost or ask your own question.