I have a power inverter in my car that I installed about 4 months ago. I bolted the ground on it to the ground terminal connector of my car battery and the + to the positive side of it. Fast forward to present, my ground on my car is corroded significantly and the nut and bolt on it have corroded so badly that the nut has puffed and the terminal is orange (both were silver instead of that poopy color). Ill add a picture of it. 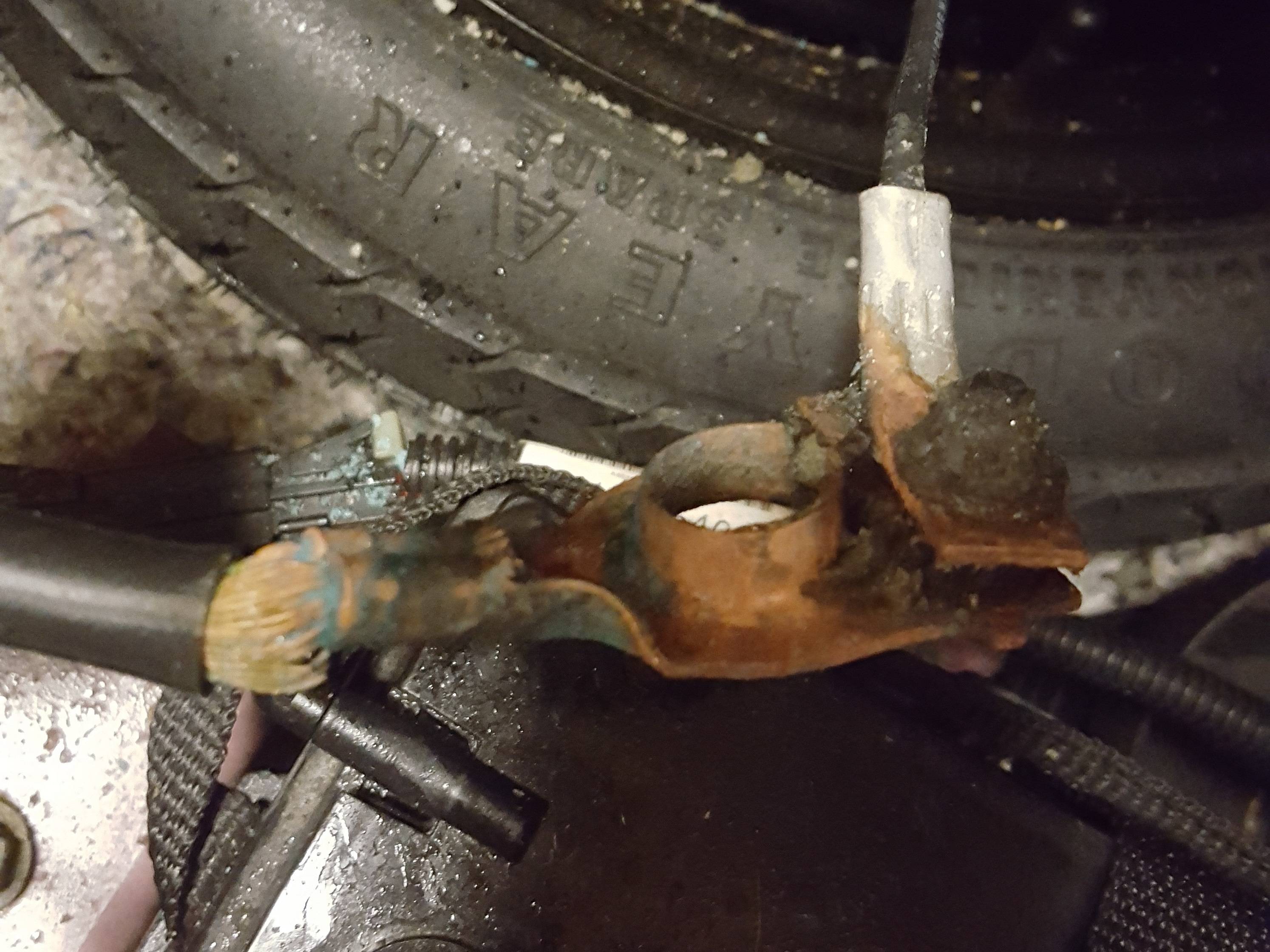 One part of the problem was that these terminal connectors are junk, ground one never really clamped on the battery that well (decent but could be bumped off with your hand no matter how tight you tightened it) and I have replaced that old terminal with one like this ( https://www.electricalhub.com/generic--battery-terminal-top-post-1 ) as my car would no longer start with the old one and was just giving me way too many problems.

With that said I am trying to figure out how best to handle the inverter now that I have replaced the battery terminal. One problem I had with it outside of the corrosion thing is that when I start my car, the inverter would freak out and start beaping at me until I turned the inverter off and then back on after having started my car. I am assuming that it either doesn't like the electrical noise that occurs from starting my car, or the voltage drop from staring my car would drop the inverter low enough that it would not work until it was turned off and then back on as some kind of annoying (to me) safety feature... The inverter works fine outside of when i start the car however.

I was thinking about either getting a small motorcycle battery that would act as a buffer between the car battery and the inverter to reduce noise/ voltage drop or getting a large capacitor instead. Both I would put closer the the inverter as I have about a 7-8 foot run from the battery to the inverter.

if a capacitor is the better way to go, can you please link me to one? the best I can find is ones made for 440V and I feel like that would be overkill. I don't really know how to differentiate capacitors so a dummed down explanation would be awesome since I am not sure how to make google give me an explanation i could follow since the ones I was looking at had stuff like 40-5 and 60-7.5 in the description which threw me for a loop

Welcome to the world of bad connections.

Corrosion will happen any time metals that are different touch. Add in current, arcing and all the heat it brings heat you'll start seeing what you see. Fixing the battery connection to one that makes good contact and you might see a huge difference.

You haven't stated the type of car, it looks like the battery is in the trunk, judging by the vent hose and tire. That would diminish the harsh environment of open engine bays. Pointing more towards poor connections causing heat, speeding up corrosion. as corrosion increases, electrical resistance builds up causing more heat. Add increased draw from the inverter and you are where you are now.

If your using it a lot, you might want to look into a second full sized battery, with accompanying isolation. your amp won;t kill your main battery and you can jump start yourself.

All you need is one good car battery and good connectors with adequate CCA.

Contact material and condition matters as it has to be compatible and a gas-tight seal. If the clamp cannot be tightened then it has been stretched and cannot be tightened , then it must be replaced. Contact resistance must not drop in voltage with 600A or whatever during engine start. CA rating is standardized as the max current when the battery drops from 12.5 to 7.5V which is essentially ESR so that 500A CA is 5V drop over 500A = 10 mOhm . The battery terminal ought to be less than a few % of this. If not then it is not a gas-tight seal and has been oxided and will continue to oxidize and corrode from occasional sulphuric acid outgassing from the battery. Also galvanic corrosion will be accelerated.

My car cuts out accessories during engine start, yours should too and your direct connection bypassed this important process to prevent unnecessary battery loading during engine start as well as perventing under-voltage to the inverter which goes bizerk.

So your direct connection is a problem. Adding a spare battery with an isolator may be what you need or better an power relay that cuts out the inverter or the cig. lighter connection if start disable-switched.

Using a capacitor may help with RF but will not prevent undervoltage as caps may be big enough to start a snowmobile but not a car or truck from dropping to 7.5V

Although unless your engine is <-30'V it should take the full CCA rating and the starter RPM sound will tell you the voltage by the frequency of the sound.

I could prove what I say with RC time constants and supercap Farads which are much smaller than battery xx kilofarads, but take my word for it, a good battery shud do the job if you want your inverter draw current during engine start.

Not the answer you're looking for? Browse other questions tagged batteries capacitor inverter corrosion or ask your own question.

2
Charging a small 100uF 450V capacitor with a small battery?
3
I want to replace a car dash cam battery with a capacitor
1
Accelerated Corrosion in Car Batteries
0
Automotive Battery Disconnecting Safety
2
Silly question: using only the positive terminal on a battery
1
Will the DC charger for the 2nd battery affect any peripherals while charging?
0
How to raise capacitor voltage to use a capacitor bank as a battery?