As you would probably all agree, current is in practice measured by putting a resistor of small resistance in series and then measure voltage across that resistor. (I know there are other scientific methods, but are they used in everyday hobby applications?)

Measuring voltage precisely is no problem. A cheap four channel AD converter (combined with a microcontroller or i2c to USB controller) accuracy might be upwards of 1% quite easily according to Andy aka (IMHO upwards of 0.5%).

However, what I find problematic is that resistors of small resistance and small tolerance are very difficult to obtain or cost forbidding prices. Four power resistors of 1 Ohm and only 5% tolerance are twice as expensive and at least an order of magnitude less accurate. Only one low power 1 Ohm resistor with 0.1% tolerance cost several times ADC price.

Are there any simple hobbyist method to measure current with better precision than 1% that does not require an electronic lab at home or dozen of dollars per resistor?

What I find curious is that it is easy to achieve 0.05% accuracy for voltage measurement, and it is damn difficult to get beyond 1% for resistors. Makes no sense.

It's quite simple actually ;)

Resistors with high enough value can be made with film technology (thin or thick) which is very cheap. This is why your average SMD chip resistor costs next to nothing. Thru-hole parts are a bit more expensive but not much. High accuracy for cheap prices is achieved via laser trimming. Quite impressive when you consider how little these things actually cost.

For low resistance values it gets more complicated, thicker films are required, trimming is more difficult, and in a high current density scenario, the laser-cut shape concentrates the current into a small part of the film, which decreases pulse power handling. If the resistor is wirewound, then it can't be laser-trimmed. Basically, less cheap/accurate manufacturing options are available for low resistor values.

Also, the resistance of whatever sits between the resistive element and the PCB (like endcaps, leads, etc) begins to matter. And these are usually metal, which is inaccurate and has very bad temperature coefficient of resistance. For example if you buy a 0.02 ohms leaded resistor, its value will depend on how long the leads are after it is soldered.

Four power resistors of 1 Ohm and only 5% tolerance are twice as expensive and at least an order of magnitude less accurate.

This one for example, isn't expensive. Now, obviously, it has a huge +/- 300ppm/°C tempco which means at its rated load of 5W, with a temperature rise of 200°C according to the datasheet, tempco alone will cause a +/- 6% drift, which means precision will be crap.

Thus you would select a 1% resistor. It does have a much better tempco (50ppm/K). It is also expensive, since it is more of a niche product.

If you want 0.1% though, you're in trouble because 0.1% of 1 ohm is 1 mOhm and this means the endcaps and leads matter. Thus you are stuck with this luxury product which, obviously, has 4 terminals and a TO-220 package so it can be kept cool with a big heat sink.

It's basically supply and demand. Current sense resistors are used quite often, but in scenarios that don't require high accuracy, like in power supply, chargers, etc. So you can get low value current sense resistors like 10-100 mOhm in SMD format for low prices. But a high accuracy version will interest few customers. This is the reason why you're having problems getting cheap high-power, high-precision resistors: people choose a power resistor when it will get hot. If it's hot, you get tempco problems. Therefore, you need to do it like everyone else:

If your need for accuracy stems from a need to measure from 0 to 3A while keeping good precision near zero, you need more ranges like in a multimeter. Use a higher value shunt resistor for low currents.

This requires a lower offset amplifier (or calibration). This is likely your best option.

This requires SMD resistors or very special thru hole resistors, but it is mandatory if you want accuracy on a 0R1 resistor. Here is some reading material. link link (second one is quite interesting!)

Also, if you want a resistor that is: very accurate, low drift, high dissipation power, etc... get a hundred 1% thin film SMD resistors and solder them on a double sided board that you make for this purpose using one of the cheapo $10 chinese PCB shops. Place the board vertically so it is air cooled by convection. The large surface area will do wonders for dissipation. A proper layout is a must though.

As you would probably all agree, current is in practice measured by putting a resistor of small resistance in series and then measure voltage across that resistor.

No, I wouldn't agree. Current can be measured by a Hall-effect sensor and if the current is AC then using a current-transformer is also a big turn-to option.

Measuring voltage precisely is no problem (using a cheap AD converter and a microcontroller or i2c to USB controller typically gives accuracy better than 0.1%).

I also disagree with this. You pay for what you get and usually cheap embedded ADCs are flaky on gain error, zero offset error and integral linearity errors and, for a 10 bit ADC, the accuracy might be upwards of 1% quite easily. The resolution might be 0.1% but that is a different story.

What is the possible solution to that problem?

Buy a cheap 5% shunt resistor, apply a known current to the shunt using a precision voltage source (you can buy 0.1% for under a dollar) and a known resistor (0.1%, higher value). Then use your 0.1% accurate ADC to measure the voltage across the shunt. 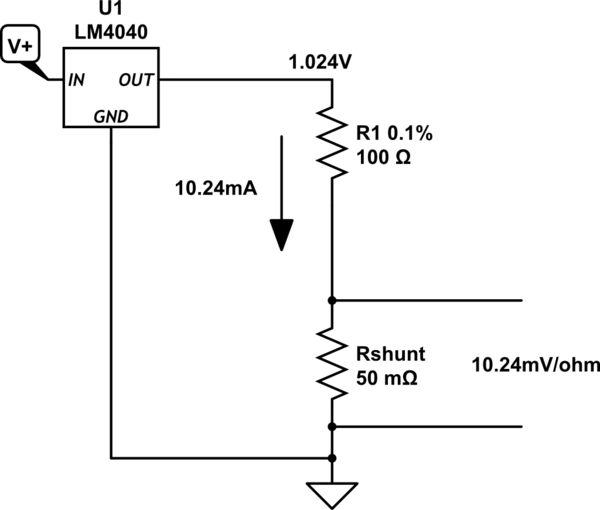 I'm using the following method in one of my power supply designs. 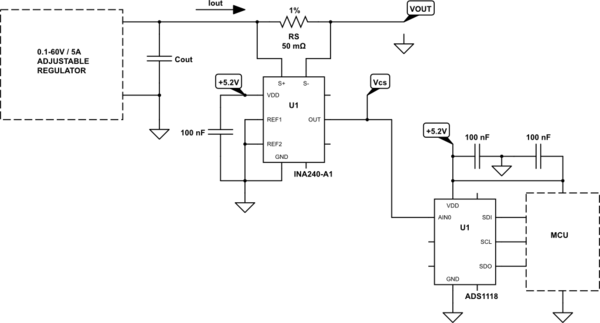 I'm using this resistor as shunt.

In my application, Vcs is about a few tens of μV at no-load. And ADS1118 measures this as very close to zero. I can measure 1mA-5000mA of IOUT with 1mA precision. The accuracy is ±1mA and it is verified with a calibrated Fluke 18B.

The reason that I'm doing high-side measurement is that the customer requested the load to be always grounded even if the power supply is off.

PS: Not an advertisement.

Multimeters usually read consistently without much fluctuation so, that is to say, that a particular multimeter will consistently read 12.1v for example on a precisely 12v supply, so it reads a bit high but this only has a small implication to calculations.

The solution may be to grab a bunch of 10% tolerance resistors (either half or double the value that you are seeking) because they are cheap (1% if you like, if your budget allows) and connect two in series onto a power supply. You can then measure the supply voltage, the current, measure the voltage drop across each resistor using your multimeter and calculate the resistance of each resistor comparatively. I presume you will not have too many that are very close to the specified resistance because they would already have been sorted and banded with a closer tolerance but, you should be able to find two resistors to add to get the value that you want either in series or in parallel.

10% tolerance on a resistor does not mean 10% fluctuation during operation, once they are manufactured thy are pretty much fixed.

It is usual in instruments to have a shunt and an adjustment. This also removes the need for your tolerance to be so tight.

Well if you're doing it at home I guess this current measurement is not used in a thousand different pieces. A resistor with 0.1% tolerance means if you order a 1 ohm resistor you get 1 ohm +/-0.1%, but if you have the possibility to measure your 1 ohm 1% resistor with an accurracy of +/-0.1%, this gives you the same result.

So why not order an ordinary 1 ohm resistor and determine its actual value by measuring it? Or is a multimeter already part of a "electronic lab"?

Not the answer you're looking for? Browse other questions tagged current resistors or ask your own question.

6
Precise Resistance Measurement Techniques
2
Using multiple current sense resistors in parallel to handle a high current measurement with cheaper resistors
0
A question on precise resistor measurement for current loops
1
Determining resistance of 3 resistors connected in delta configuration
12
What is the difference between high precision resistors and current sense resistors
1
Cheap precision sense resistor
2
Is it OK to replace a 750 ohm 5W ceramic resistor with a 750 ohm 10W ceramic resistor
0
How to build a digital potentiometer with standard value resitors and MOSFETs?
19
Is there a way to average resistors together to get a tighter overall resistance tolerance?