We use them every day and those in the know fully understand the functional characteristics of BJT transistors. There are documents and links galore explaining the operational math. There are even tons of nice videos that explain current theories of how they physically work. ( Most of the latter given by folks that speak "Tele-marketer English" for some reason. )

However, I have to admit, even after 40+ years, a lot of it I have to accept at face value, since the descriptions of how the collector junction fits into the equation is always a bit hand-wavy.

Anyhow, that aside, there is one facet I really just don't get. It seems to defy the laws of physics, Kirchhoff's Laws et.al.

It is known, and we accept, that when saturated, the collector voltage will be less than the base voltage. We obviously use that to our advantage in circuits and chose parts to give us as low a Vce-Sat as possible for a particular load current.

All fine and dandy, till you look at the quintessential mode of a typical NPN transistor... 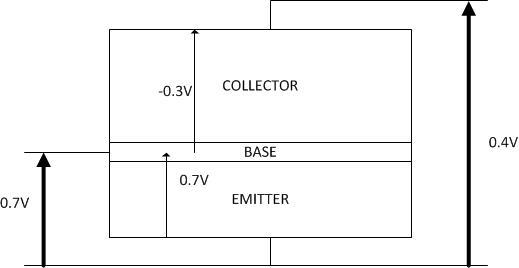 Even if you add in some back-EMF type voltage in there to account for it, the collector current would be going the wrong way through the base-collector junction..

Current in a semiconductor can flow via two major mechanisms: There's "drift" current, where an electric field accelerates electrons in a certain direction. That's the simple way of current flow we're all used to. There's also "diffusion" current, where electrons move from areas of higher electron concentration into areas of lower concentration, much like water soaking into a sponge. However, those diffusing electrons can't move around forever since they will, at some point, hit a hole and recombine. That means diffusing (free) electrons in a semiconductor have a half-life and a so-called diffusion length, which is the average distance they travel before recombining with a hole.

Diffusion is the mechanism by which a diode junction creates its depletion region.

Now, if the base-emitter diode is forward-biased, the depletion region of the base-emitter diode gets smaller and electrons begin to diffuse from this junction into the base. However, since the transistor is built so that the diffusion length of those electrons is longer than the base is wide, a lot of those electrons are actually able to diffuse right through the base without recombining and come out at the collector, effectively "tunneling" through the base by not interacting with the holes there. (Recombination is a random process and doesn't happen immediately, which is why diffusion exists in the first place.)

So in the end, some electrons end up in the collector by random movement. Now that they are there, the electrons can only get back into the base when they overcome the forward bias voltage of the base-collector diode, causing them to "pile up" in the collector, decreasing the voltage there, until they can overcome the base-collector junction and flow back. (In reality, this process is an equilibrium, of course.)

With the voltages you apply to the base, emitter and collector, you only create the electric fields in the semiconductor that cause drift of electrons towards the depletion region, changing the concentration of electrons in the crystal, which then results in diffusion current flowing through the base. While single electrons are influenced by the electric fields created by the voltages at the transistor's terminals, they do not themselves have a voltage, only energy levels. Within a part of the crystal that is generally at the same voltage, electrons can (and will) have different energy. In fact, no two electrons can ever have the same energy level.

This also explains why transistors can work in reverse, but with much less current gain: It is harder for electrons to diffuse into the highly doped emitter region than into the lightly doped collector since the electron concentration is rather high there already. That makes this path less favorable for electrons than in the non-reversed transistor, so more electrons just flow straight out of the base and the gain is lower.

Therefore, your real question is probably: Given those applied voltages, how come that the law of physics allow the collector current to flow into the collector?

Kirchhoff's laws applied to the BJT imply only that $$-V_\mathrm{BE}-V_\mathrm{CB}+V_\mathrm{CE}=0$$ and $$I_\mathrm{C}+I_\mathrm{B}+I_\mathrm{E}=0,$$ where I assumed terminal currents as positive when entering into the terminals.

Furthermore, since there's no source of energy inside the BJT, we require the power entering the device to be positive (I consider a static case, neglecting dynamical effects to avoid the subtleties of passivity), that is, $$V_\mathrm{BE}I_\mathrm{B}+V_\mathrm{CE}I_\mathrm{C}>0.$$

These are the only constraints that physics puts on the terminal voltages and currents in the static case. As you can see, all the above conditions hold for a saturated BJT.

Your confusion probably comes from implicitly assuming a linear device, which a BJT is not.

Keep in mind that the base does not have the same voltage throughout its area. There is an irreducible "sheet" resistance associated with the base, whose external connection must necessarily be at the edge of the structure in some sense. Since there is a current distribution within that "sheet", there is also a voltage distribution.

In essence, the voltage drop across the inherent base resistance is what allows the voltage distribution that we see at the external terminals.

BJT's are current devices. When in the active region, lot's of the emitter's (emitters are heavily doped and more negative than the base) electrons go into the base (lightly doped) and some fall into the fewer base holes, but most diffuse across to the collector, causing Ic. When saturated, the collector is also more negative than the base, so it contributes some electrons to the base. As the collector contributes more electrons to the base (Vbc is more positive), it follows that collector-emitter current will be lower. As Vbc gets smaller (Vce(sat) is higher), the saturation current can be higher. So once in saturation, the collector voltage goes up with collector current.

You can run a transistor with the collector and emitter reversed. Since the collector is lightly doped compared to the emitter, gain is lousy, but Vce(sat) will be down in the single mV range. In the pre-FET era, we used this approach to ground analog inputs in sample-and holds, etc.

Everyone's missing a simple, very basic fact. (Most beginner textbooks miss this too. Even some engineering profs seem clueless.) The fact: junctions always have a voltage across them, even when unpowered, even when it's metal-silicon with no diode effect ...and even when the junction is iron-copper, chromel-alumel, etc.

In other words, if we want to understand everything about diodes and transistors, we're not allowed to ignore thermocouple physics and NON-RECTIFYING JUNCTIONS. If we do, then Vce becomes unexplainable, a dark mystery of engineering.

Ideally the Vbe matches the Vcb and both are forward conductng with Vce(sat)=0 at Imax and Ic/Ib=10.

As Dave T. pointed out the Vbe base spreading resistance (aka effective series R or ESR) is not uniform but by making multiple narrow base wells in parallel the performance improves.

When the ESR of the smaller higher doped B-E junction is higher than the larger ESR of the C-B junction we get a higher Vbe than Vcb thus Vce(sat) rises. THe current gain has now dropped to about 10% of max.

Zetex invented about 100 process patents around this epitaxial technology and now as Diodes Inc has many products although more expensive have similar dies sizes with Rce in the 10's of milliohms intead of obsolete TO-3 cans with Rce in the 1 Ohm range. This reduces the heat dissipation of at high currents significantly.

ON Semi have their own low Vce(sat) parts too.

Not the answer you're looking for? Browse other questions tagged transistors bjt physics or ask your own question.

0
BJT transistor junctions: base-collector
19
How do BJT transistors work in a saturated state?
1
Will there still be small voltage in transistor OFF state?
4
Why might the collector-emitter voltage for this transistor be so high?
2
Bipolar transistor as a switch
8
A question about Vce of an NPN BJT in saturation region
0
Transistor circuit driving me insane
0
Can we present the current-driven BJT as two cascaded non-linear converters?
2
Why does the Collector-Base Junction need a lower magnitude voltage to be forward biased compared to the the Emitter-Base Junction?
0
BJT transistor, collector base junction