I've been looking at some microcontrollers and I've seen they've got some "weird" minimum operating temperatures, like -25 degrees or -10 degrees etc. But I can't really understand why there is a minimum, a maximum I do understand because everything melts down and breaks, the resistance increases making the signals too weak. But when you go to the cold side. Everything kind of gets better and better, the resistance gets reduced, everything gets more stable. But yet... the minimum operational temperature is -25 degrees... Why is it not 0 Kelvin?

Because I was thinking about the mars-rover and other satellites, when they are behind the sun they are operating at nearly 0-50 kelvin, the mars-rover... according to wiki it gets as cold as −87 °C (−125 °F). And this is still very much more cold than -25 degrees.

So, can anyone please explain to me why microcontrollers do have minimum operational temperature? The more thorough the better.

2nd Edit! Modified my answer about semi-conductors based on jk's answer below, read the history if you want to see the wrong bits I modified!

Everything gets weird within certain limits. I mean, sure, the resistance improves in conductors but it increases in semi-conductors, and that change effects how the IC works. Remember that the way that transistors work on the basis that you can modify their resistance, and if the temperature drops so low that you can no longer decrease their resistance, you've got an issue! Imagine that suddenly your semi-conductor essentially became a resistor... how do you control it? It no longer behaves the same way! Now I'm a bit confused at where you're getting the -25°C, as the industrial/military spec should put it at -40°C for the minimum operating temp.

But for the space question, I can answer that as I work in a space lab! In general you have three thermal concerns in space:

1) In space, you only radiate heat. Radiation is a terrible way to get rid of heat. In the atmosphere, you conduct heat into the air around you which makes cooling a lot easier. So in space, you have to put big heatsinks on to get the heat into larger radiative surfaces.

2) If you have a component which doesn't generate heat, then space is happy to let you get really friggin' cold! In general, what you do is you have active heating elements to keep components which don't generate more heat than they radiate but have thermal limits.

3) Heat swings are common because you will exit and re-enter the sun's rays. Thus you need to have active thermal management where you have a big heatsink which can radiate heat when it's hot, and a heater for when it's not.

You can also get extended temperature range devices which go lower and higher, but there's pretty much always a limit. Some of them are for where the cold temperature will crack the die because the metal will shrink more than the plastic (or vice versa) which is why they list limits for storage as well!

The limit is mostly in materials. You also tend to get space-rated chips made out of ceramic for the packaging, which can also raise or lower the thermal limits.

Anyway, I hope that explains it for you. I can try and answer any other questions, but I'll admit the physics of low-temperature semiconductors is not my forte!

Here's a link to a wikipedia entry about the idea that at lower temperatures there are fewer electrons which are excited enough to generate a current flow through a semiconductor lattice. This should give you a good idea of why the resistance becomes higher, and why 0 Kelvin would have never been an option.

Kit's answer is dead right about components in space, but I thought I'd expand a bit on semiconductors vs conductors (very loosely without the maths).

Conductors resistance decreases with a drop in temperature. This is loosely, because the resistance comes from the free flowing electrons being slowed down by vibrations in the crystal lattice they are flowing through. Lower the temperature means less the vibrations.

Resistance of semi-conductors increases with a drop in temperature. This is loosely, because they don't have free electron to carry charge at low temperatures in the first place. As they are warmed they get more charge carriers and this out weighs extra resistance from increased vibration in the structure.

Lastly, superconductors rely on strange quantum phenomenon. Either at very very cold temperatures and/or by having their free electrons confined to a 2d film rather than a 3d solid allowing the physics to get weirder.

"Accurate Quantitative Physics-of-Failure Approach to Integrated Circuit Reliability" Their conclusions are based on physics and Root cause analysis especially since feature sizes have shrunk orders of magnitude over that last 30 years.

These FOUR REASONS above are the most common now with deep space IC's as well as consumer IC's. Space has more radiation and environmental stress factors. Moore's Law has also accelerated these new failure modes.

Historically, the most common generic reason for old technology IC's were limited in temperature range have to due with operating with packaging & environmental stress.

Thermal shock, condensing and rapid evaporation as well as analog effects of thermal drift Consumer IC are limited 0~85'C in plastic cases for this very reason. It is not a perfect seal and moisture ingress is possible. But even space hardened glass passivated ceramic IC's have thermal limits. In addition to the moisture issues stated below, read the most recent confirmed issues above.

If there is enough moisture molecules over time and it freezes and cracks the substrate it fails.. If it is working ok in a frozen state with frozen molecules of moisture and then thaws and causes corrosion or leakage and fails. It's your fault. Some plastic seals are slightly better and self-heating prevents some from freezing below certain temps this also reduces migration of moisture.

At the high end , popcorm effect causes moisture to blow chips and Black epoxy grade has improved significantly over the last 40 years due to Sumitomo. Clear Epoxy is not as good and used in some LED cases or IR devices. So LED's must stay packed dry before soldering. Modern designs of large LED engines without the gold whisker wirebonds are rated to a certain RH @ Temp indefinitely, while the rest are a risk after a few days of open exposure to high RH. Really it's a valid risk and as bad as wounding them ESD, except it shears the gold wirebond.

This is why all space or military temp range parts tend to be ceramic with glass coating on leads and consumer parts are rated to 0'C.

Any exceptions such as Industrial and Military temp range are due to tighter specs needed for Military over a wider temp range than Industrial but they both function over a wide range just not guaranteed analog specs.

CMOS runs faster cold than hot. TTL funs faster hot than cold and junction temps drop to dissipate less heat. I have tested HDD 8" disk drives over a bag of dry ice < -40'C after an hour just for the military to prove it works, but no guarantees with condensation preventing head-crash.. ( the motor bearings squealed for a few seconds tho.... but passing 0'C from freezing going up... that's a humidity risk.

added journal references for proof. The limiting reliability factor that affects the temperature of ALL integrated circuits ( especially large chips such as microcontrollers) is the mechanical packaging more than the function of the semiconductor. THere are hundreds of reliability articles to explain this. There are also articles to explain why there is a variance of low temperature limits. Some are de-rated from -40'C for good reason, and those extended from 0'C may be for bad reasons. Although not explicitly stated that profit is reason, junior engineers mis-apply HALT improperly to extend qualified ranges at risk from misunderstanding the chemical migration and structure stresses that exist. While wiser companies will re-derate with good reasons, which I will support with references below.

1. Hermetically sealed properties are not a digital phenomena.

It is analog and relates to the amount of ingress or moisture leakage atomically creaps into a mechanical package. 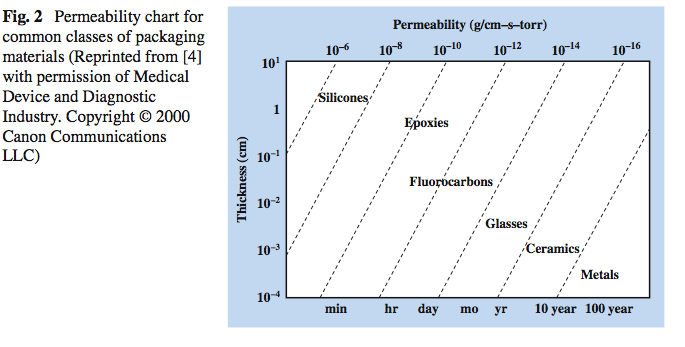 As stated in above link

I could write a book on this subject, but then so many others have already, so I will merely reference some literature, which will prove my answer is valid.

Not the answer you're looking for? Browse other questions tagged microcontroller temperature or ask your own question.

9
Op Amp circuit not behaving as desired
0
RTD sensors and the mystery of Voltage Vs Current sources
1
Ambient temperature vs operating temperature?
3
Regulator circuit design
0
What is the meaning of inferred absolute zero temperature? Why does the resistance temperature graph it is obtained from behave that way?
38
How to make electronic systems which work below −40°C (−40°F)?