Where does branch circuit neutral current go in a single phase or three phase electrical panel?

Specifically, I would like to know the exact path of travel for the neutral current when it comes back from a load to the electrical panel. I am an electrician of 20 years and have recently acquired information that challenges the way I was taught. Does branch circuit neutral current immediately return to the center tap of the pole transformer via the neutral bus in the panel? Or does it find its way to back to its source via the other phase that it would be 180' out of phase with? There is a lot of conflicting information about this on the internet and I am hoping someone on this site can help me.

If only one load is turned on, you will have 1 amp of current flowing from its hot in the service, through the breaker to the load and back through the neutral through the panel to the service neutral.

Now turn on the second load. Again, you have 1 amp on the hot and neutral but 180 degrees out of phase to the first load. Each current returns to the panel neutral bar but because they cancel out, no current flows back to the service neutral. You would be able to disconnect the service neutral without any change, assuming the loads are perfectly balanced.

As you asked in your comment, you could think of one half-cycle of current entering from service hot A, through the breaker, to load 1, back to the panel neutral bus, back out to load 2, back to the other breaker and out to service hot B. Effectively, the two 120 volt loads would be in series across the 240 volt service.

Think about the situation where a home loses its service neutral. If the loads on each leg are about the same, each leg will remain around 120 volts. However, if the homeowner turns on a large load on leg A, such as a microwave, the voltage on A will drop and the voltage on B will rise. While the loads were balanced, everything is the same with and without the neutral. It’s only when they unbalance that current needs to flow to the neutral.

This is also true of 3-phase systems. Here, we have three currents that are each 120 degrees apart. If all three are balanced, the return current for any one phase are carried by the other two. Again, the service neutral only carries any unbalanced load.

For the purposes of understanding the general scheme, you can analyze the circuit as if it were a DC circuit. If you have three similar loads connected to three circuits as shown below. One the difference between the currents of two hot busses flows in the neutral bus back to the distribution transformer. The lower current of the two hot busses is supplied through the other hot bus. 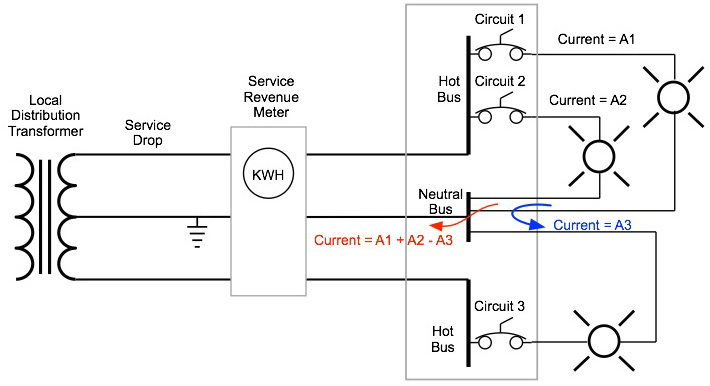 To accurately consider that the current is AC, the power factors of the loads must be considered. That requires using vector addition rather than arithmetic addition.

Not the answer you're looking for? Browse other questions tagged current electrical neutral or ask your own question.