I am designing two stage operational amplifier in CMOS technology. After sizing all transistors and preeliminary checks I wanted to determine input offset voltage of my circuit, and browsing many pages with simillar questions, I actually did not find answer that would make thing clear for me.

First of all, most of the answers in that topic assume that by applying only common voltage to both inputs the Op-Amp output would be 0, which is basically not truth, as there will always be some Common Output Voltage. And this Common Output Voltage is already affected by Input Offset Voltage.

And here is where I am unable to handle this problem. I think applying any resistor divider etc could not work as any obtained result will be useless without knowledge about common output voltage. That seems as a vicious circle to me.

Should I just make spice .op to make input pair's VGS to be equal, or there's a better way to simulate the offset value? 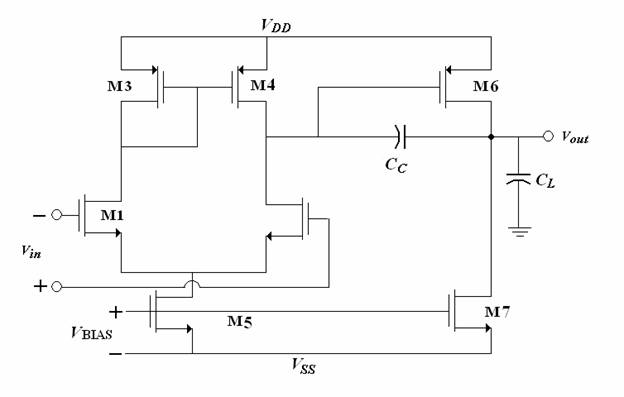 How to measure input offset error? (i.e. The total of input & output offset errors as explained above.) The easiest, most practical way is to configure the op-amp as a unity gain buffer ( connect output to the minus input). Apply a voltage, within the common mode range of the op-amp, to the positive (i.e. non-inverting) input. The difference between the applied test voltage and the output voltage is virtually totally attributable to the input offset error of the amplifier.

You can connect a DVM set to its lowest range between the output and the NI input and read the actual input offset voltage value directly, assuming you have a sensitive enough DVM. Vary the test voltage across the common mode input range to find the worst case.

I'm not a SPICE guy, but I'd expect you can do the same thing in a SPICE model.

The common approach to specify the opamp's offset value is to define what should the input Vin values be when Vout is equal to VDD/2. For example, when VDD = 3.3 V, it is desired that the output is VDD/2 = 1.65 V to have full swing for the output signal. The input voltages are also often equal to VDD/2. Hence, you set Vin+ and Vin- to 1.65 V and do .dc analysis where Vin+ is swept to find its value so that Vout is equal to 1.65 V.

I'm surprised, as you said, you did not find the answer to that questions in books. The position I have at hand is https://payhip.com/b/5Srt and the offset issue is described in, unfortunately paid version of the book, ch. 1.2: 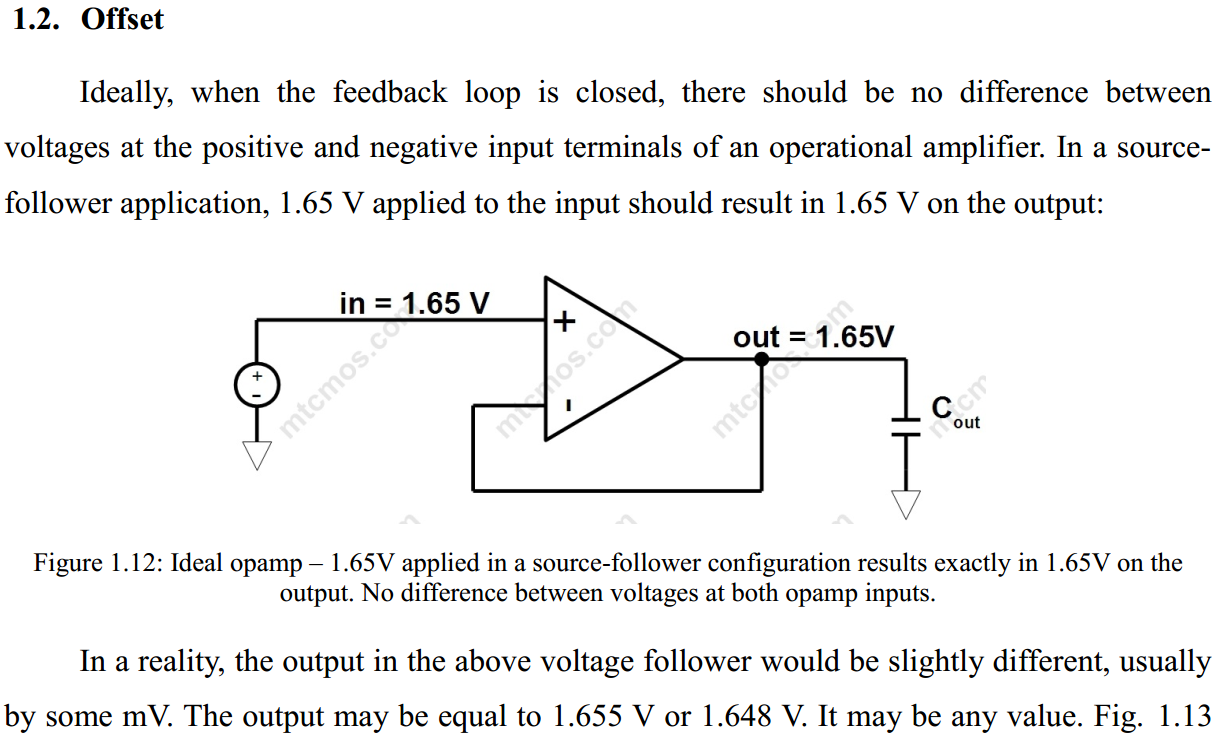 But you should really be able to find it in other books as Razavi or Baker, see: http://www.designers-guide.org/Books/.

The voltage follower (unity gain buffer) configuration is fine to test offset voltage, but also the following testbench may be used: 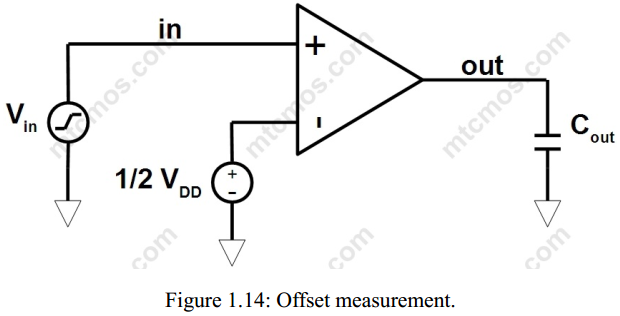 As the last word, your design is fine. It is a classical 2-stages class A opamp. It is very often used in analog IC design. The offset value may be defined for any opamp architecture single-ended or differential. For your architecture you may consider adding zero nulling resistor (see Fig. 3.2 from https://payhip.com/b/5Srt. Click Preview button - it is in the free version) to achieve better phase margin.

Offsets result from scaling errors in manufacture of the MOSFETs, and manufacture variation is not a SPICE parameter. What you can do, is to use device models with some random variation in the Vth threshold voltage, and perhaps into the channel length, to mimic the expected variations. There is no simple "offset value", but rather an expected variability in the offset will give rise to a distribution of values clustering around '0'; the important variable is the width of the distribution (or, of some box that encloses the distribution and whose sidewalls are 'worst-case' specifications).

This requires some known characteristics of the manufacture be tested against your models (when the deviations seen in manufactured items match the model, your random inserted variations are the right magnitude). The simplest approach then is to make a couple of dozen MOSFET models, with a distribution of deviations in Vth.

Then, run SPICE to make an offset prediction with each transistor given a random model from the set of 32. Repeat that a few hundred times, and look at the offsets that result (maybe you can throw out the highest and lowest). Just connect (+) input to GND, and voltage-follower gives the offset as output DC voltage.

Maybe, too, you can vary only the input sense transistors, because those have the largest effect.

I'd like to give some additional information to FiddOhm's answer which I believe is closest to the answer you wanted (approximating the input offset voltage through unity-gain configuration).

Input offsets due to the non-zero output (or just an input not equal to the output voltage for zero-inputs) will tend to be small as the DC-gain increases.

In reality, you can easily do better than the worst case by adhering to layout rules for matching transistors. And this is why it gets tricky: it heavily depends on the layout. Spice will always assume perfect layout. Typically you at least increase the transistor sizes (the effect of \$\pm10nm\$ on \$1\mu m\$ will be relatively larger than on \$10\mu m\$). Further improvements can be made using identical layouts, alternating fingers, centroid layouting, etc. Each yielding better results than the last.