What's this triac-based device that controls the lamp in my ceiling fan?

I have a Harbor Breeze (Lowes) ceiling fan with a defective light, but with a working fan motor. (A tree fell on my service drop, cutting the neutral wire but not the ground or 240V line wires to my house, and a number of devices failed.)

I was getting 90VAC (should be 120VAC) in the sockets with no lights connected, but with 3 8W LEDs installed that drooped to 6VAC, and with one 2.4W LED candelabra bulb I get inconsistent voltage and a ~2 Hz flickering, blinking light. I opened the fan to find this device between line in and the light: 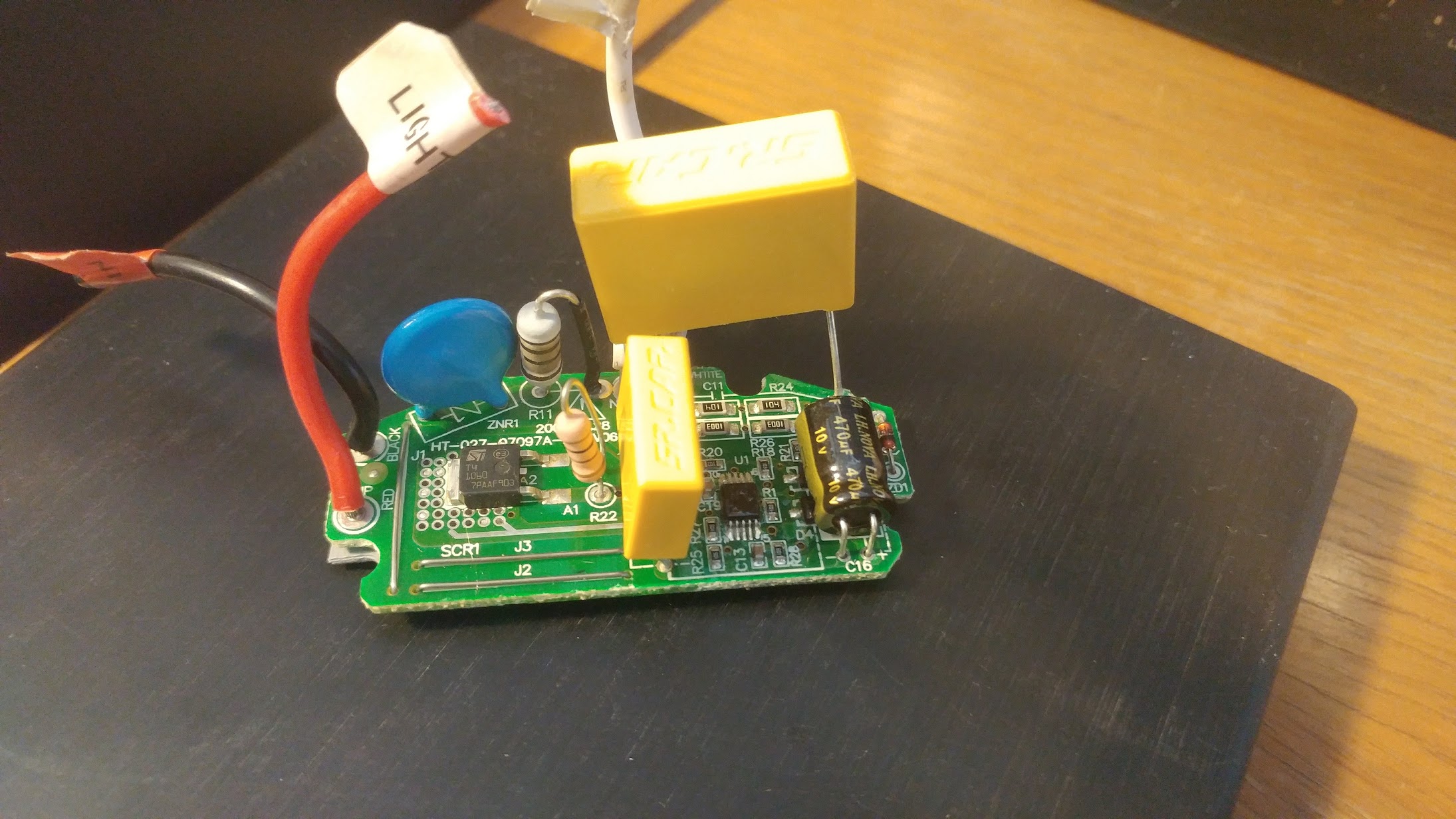 It's not the motor speed capacitor, that's in the top part of the fan and seems to work fine. I get 3 speeds with this device removed. It consists of:

What is (was) this module supposed to do? It has no input for the fan state, and I don't see why I'd want my lights to run off a fancy triac setup when there's a pull cord on/off switch downstream of this device.

The lights are 120V candelabra bulbs, there's a pull-cord switch, and I'd rather have lights and no fan than fan and no lights...so I removed this, connected the line in that used to go to this to the light, and the whole system works. Lights switched by the pull cord, fan goes through 3 speeds with the , lights, reverse switch. Am I just reducing the Energy Star efficiency/power factor of my fan? ...But how, if this is just in parallel to the motor and in series with the light switch?

I don't think I need to replace it - everything seems to be working fine - but should I? Where do I get one? What did it do?

It's difficult to trace what's going on with all those tiny SMDs in the U1 cluster under all the conformal coating. Some decoupling caps, some 10k, 2k, 1k resistors, and some kind of logic IC...but not really sure. Really more interested in what purpose it could possibly serve to have some unknown IC modulate a triac between line in and the rotary switch for my lights.

Other writing on the PCB, front side:

Also, there are a few areas of traces coated in solder (presumably for higher current capacity) and what looks to be a routed grove filled with white epoxy - or maybe just thick silkscreening - for isolation on the reverse. I also noticed that either they marked the edge under the blue MOV with a sharpie, or the FR4 was blackened (the reverse has thick traces from the black wire to the blue MOV).

Looks like it might be a controlled rectifier for the light. These are used to turn on / off at different points in the AC waveform for dimming. The angle in the AC input where the SCR is turned on is called the delay angle. 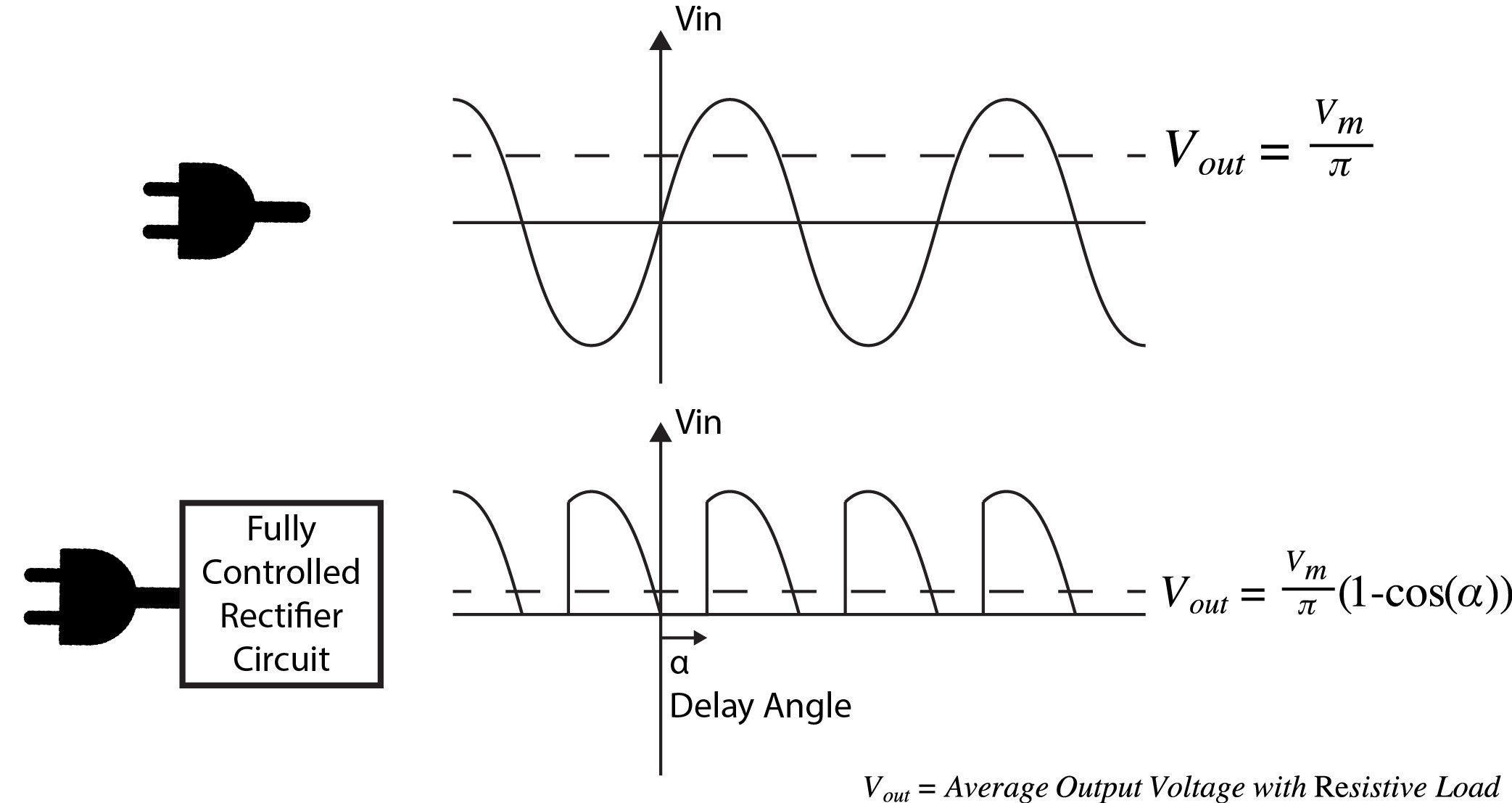 It looks a lot like it's intended to control the lamp.

possibly there's a special combined light-switch and fan control that operates over only 2 wires so it can be retrofitted in rooms where there is not enough installed wire to control both the lamp and the fan on separate circuits.

It’s the circuit board for a remote-control receiver. Lowes sells a couple models that include that: https://m.lowes.com/pd/Harbor-Breeze-Saratoga-60-in-Oil-Rubbed-bronze-Indoor-Downrod-Mount-Ceiling-Fan-with-Light-Kit-and-Remote/1000107707

Bypassing it won’t hurt anything except your ability to use the remote.

Not the answer you're looking for? Browse other questions tagged identification triac fan or ask your own question.