I am attempting to write a Hardware Abstraction Layer (HAL) for a PIC32 (PIC32MX664F128H to be precise), in which I can use generic defines for the ports in question without having to use the exact port names and port registers. Ideally I would like to only use these defines for the various pins on the PIC, and have a "wrapper" module in which I can specify which pins the defines refer to.

I have read through this forum post, which basically explains exactly what I am trying to achieve. Post #4 (reply #3) is of particular interest here. The basic idea is to use a struct (GPIO_TypeDef) to define a type that contains the 4 registers (TRIS, PORT, LAT and ODC) for each port (note that the forum post was for a PIC24 (16-bit processor), and that I've adapted the code for the PIC32 (32-bit processor)):

The entire port is then cast and bound to a define which is used to point to the port address in memory:

The TRIS register's address is used for the pointer binding, since it is the first of the four register to occur in memory for each port. This can be seen from the PIC's datasheet (using PORTB as an example):

A set of macros is then defined for the port operations:

In the user code, one would define e.g. a pin that controls an LED as follows (using PORTB instead of PORTC as in the forum post):

The LED can then be turned on/off as follows:

What is interesting is if I define seperate structs for each of the four port registers as follows:

and toggle the corresponding bit (bit 4) in each of these registers as follows:

it works perfectly. The same goes for when I do the same with the TRIS, PORT and ODC registers (and of course modifying the macros accordingly). Why does this work, and not the first method?

I think the real problem may lie in that you don't have your struct layed out correctly to include each sfr's atomic instruction sfr. In MplabX you can ctrl click on an sfr like PORTA to go to the header. For example, for a PIC32MM series, I get this

So to do this correctly, your struct definition should be something like

also as a bonus answer to extend my comment, you must use the atomic instructions with the pic32 or cross interrupt writes to latches will be corrupted due to read modify writes. So to correct your examples, they should be something like

kkrambo's answer deserves some mention here, as it has shades of the correct answer.

Take a look at the diagram for one typical I/O port.

Notice that WR tris overrides all other write operations, so you have to control the port in the proper sequence. WR TRIS should be first, then WR LAT, then WR ODC. WR LAT and WR PORT go to a OR gate, so either one puts data on the pin.

It works manually because you implicitly define the order, but as a global command things may not occur in the right order, especially if you get a toggling effect.

Consider re-wording your type def to include a specific order, so the data does not loop back to itself (toggle). AS part of the HAL, it must also contain the proper sequence. 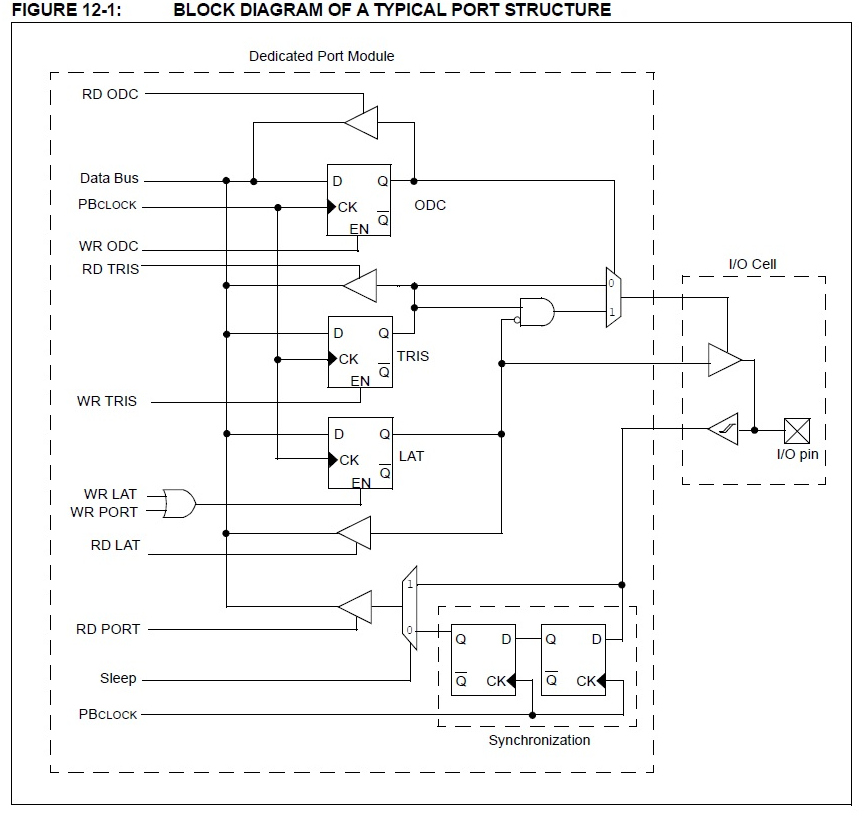 Does your first method work if you use the following structure definition?

Not the answer you're looking for? Browse other questions tagged microcontroller pic gpio hal-library or ask your own question.

1
PIC output is high before being set high automatically
2
Frequency Sensitivity of GPIO Pins
1
Error in making pins input in PIC32
2
Does the addresses of an arbitrary peripheral register can be used to store data randomly during code execution?
0
Driving 5V mosfet with 5V tolerant pins on 3.3V dsPIC33F
1
What does _SFR_IO8(0x04) do? AVR
0
STM32 Unexpected reset when a GPIO pin gets HIGH
1
Voltage to GPIO pins
2
Getting error when setting GPIO port mode register
1
STM32L4 slow toggling GPIO pins