Im new to use of mosfets.

If I was to use two Mosfets with an Arduino, would I be able to drive them both with just one digital pin connected to both mosfet's gates but opposite actions?

I'm currently using n-channel mosfets but I read about p-channel. Having p & n gates tied to one pin?

The answer to your question is, yes sometimes.

Provided the P-Channel device is connected to the same rail as the MCU, you can use a circuit like below quite happily. 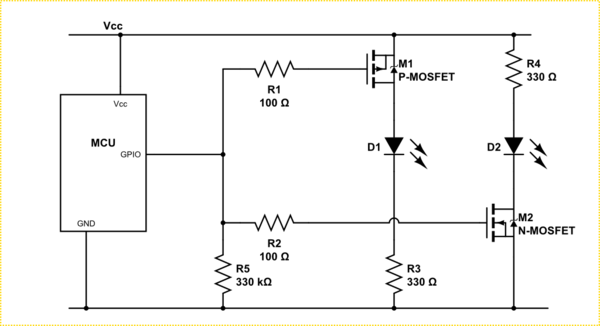 You do however need to be aware that you are doubling the gate capacitance being driven by the MCU pin and as such turn on and turn off times will be extended in this configuration. The double cap also increases the required gate switching current.

Note each MOSFET should have it's own gate resistor, R1 and R2 here, and those should be sized so the switching current of both added together does not exceed the drive current of the GPIO.

The "default condition resistor", R5, can be a pull down as shown, or a pull up, depending on which LED you want to be on when the MCU is not initialized yet.

Both the P and N MOSFETS need to be chosen to have a maximum Vgs-Threshold around Vcc/2.

NOTE: The MOSFETS will not switch at exactly the same time. As such you should not depend on this circuit to drive a push-pull type load or other circuit that depends on edge coincidence.

If the P-Channel is attached to some higher rail, then you need something more complicated, like Wesley's answer.

As far as I understood from your question, you want to set 1 mosfet on and the other one off with single pin. What you are looking for is exactly what you have suggested. Using n and p channel mosfets.

If you want to do it using only N-FETs: 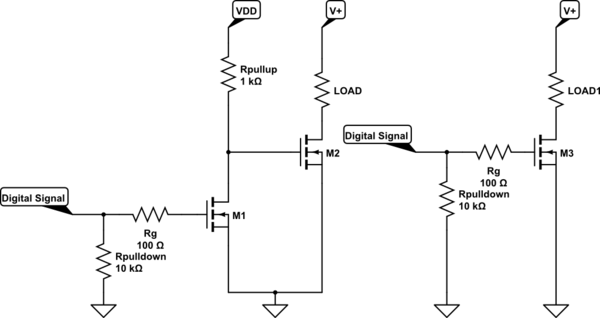 When the digital signal is high:

When the digital signal is low:

Not the answer you're looking for? Browse other questions tagged mosfet components wiring component-selection or ask your own question.

2
Simple ESD protection for MOSFETS
0
MOSFETs leaks current between two water sensors
1
H bridge heating issue when driving BLDC
22
Why am I cooking MOSFETs?
3
Why does the signal MOSFET keep failing in this circuit?
0
What is the use of two n mosfets with their sources tied together?
0
Trouble controlling LED strips with n-mosfets on 2 power supplies
2
Driving two MOSFETs with one AND Gate?