Imagine a step response of a series RLC circuit oscillates as an under-damped way: 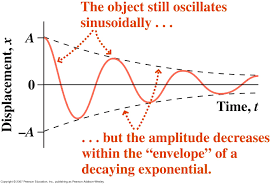 I also came across the following equation:

As far as I understand the Ď‰d above is the frequency of the damping oscillation (?) and Ď‰0 is the resonant frequency which would be the oscillation freq. if the resistor was zero.

Is my way of thinking correct? If so what is Ď‰d called in literature?

what is \$\omega_d\$ called in literature?

It's sometimes\$^{(note1)}\$ called the damped resonant frequency and applies to some 2nd order filters but not all. I regard it as the frequency where the observable resonant peak is maximum on the bode plot. For a 2nd order low pass filter this might help: -

The peaking frequency becomes the same as \$\omega_n\$ when there is no damping (\$\zeta\$).

For a series RLC circuit there is no difference between \$\omega_n\$ and \$\omega_d\$ - it's just the way the math turns out because there is (what is called) a "zero" at 0 Hz and this nullifies the effect of the pole situated at negative complex frequencies. If you find this last paragraph beyond your learning I do apologize.

\$^{(note1)}\$ - Often the damped resonant frequency is called the peaking frequency (as mentioned above i.e. \$\omega_d=\omega_n\sqrt{1-2\zeta^2}\$) but it is also quite often mentioned as the projection of the pole to the jw axis as per below: -

Note the subtle difference in the two formulas.

That projection to the jw axis is the frequency of the decaying oscillation as seen with a step response on (say) an RLC low pass filter like this: -

With values plugged-into the calculator you get a response like this (and please note the damped oscillation frequency in the lower half of the picture): - 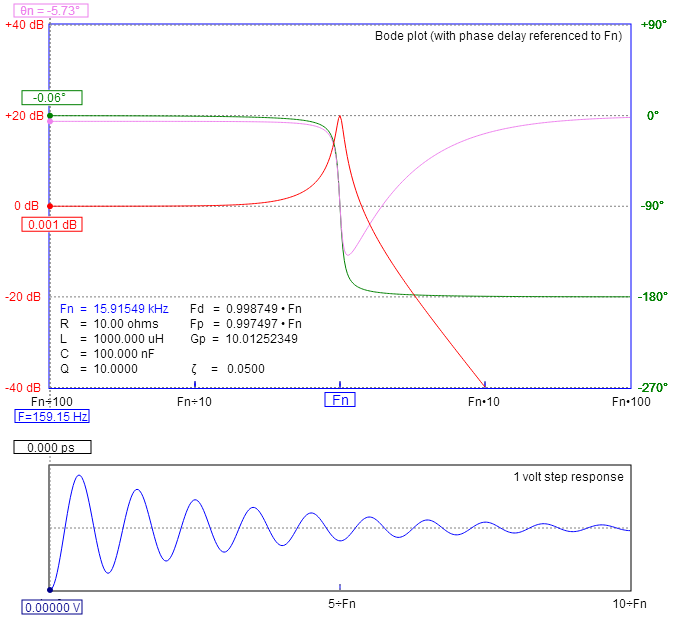 1
Damped RLC Circuit Equation
4
Intuition for resonant, natural, and oscillatory frequencies of RLC circuits?
3
RLC circuit: unexpected behaviour
0
Some questions on a passive network's transfer function and time domain response
1
Solution of current in series RLC circuit for a forcing function
1
What are AC and DC transients, rather do we even classify transients that way?
1
Parallel RLC Circuit: how to write differential equation?
0
Second order transfer functions, intrinsic time constants and responses
5
LT Spice: parallel RLC circuit resonator giving weird frequency response?
0
Is the resonant frequency as defined for a second order transfer function same as the frequency at resonance in a second order electrical circuit?