The problem is that at certain amplitudes of the input signal I get quite intense toggling (or sometimes dead bands) on the output which looks like this: 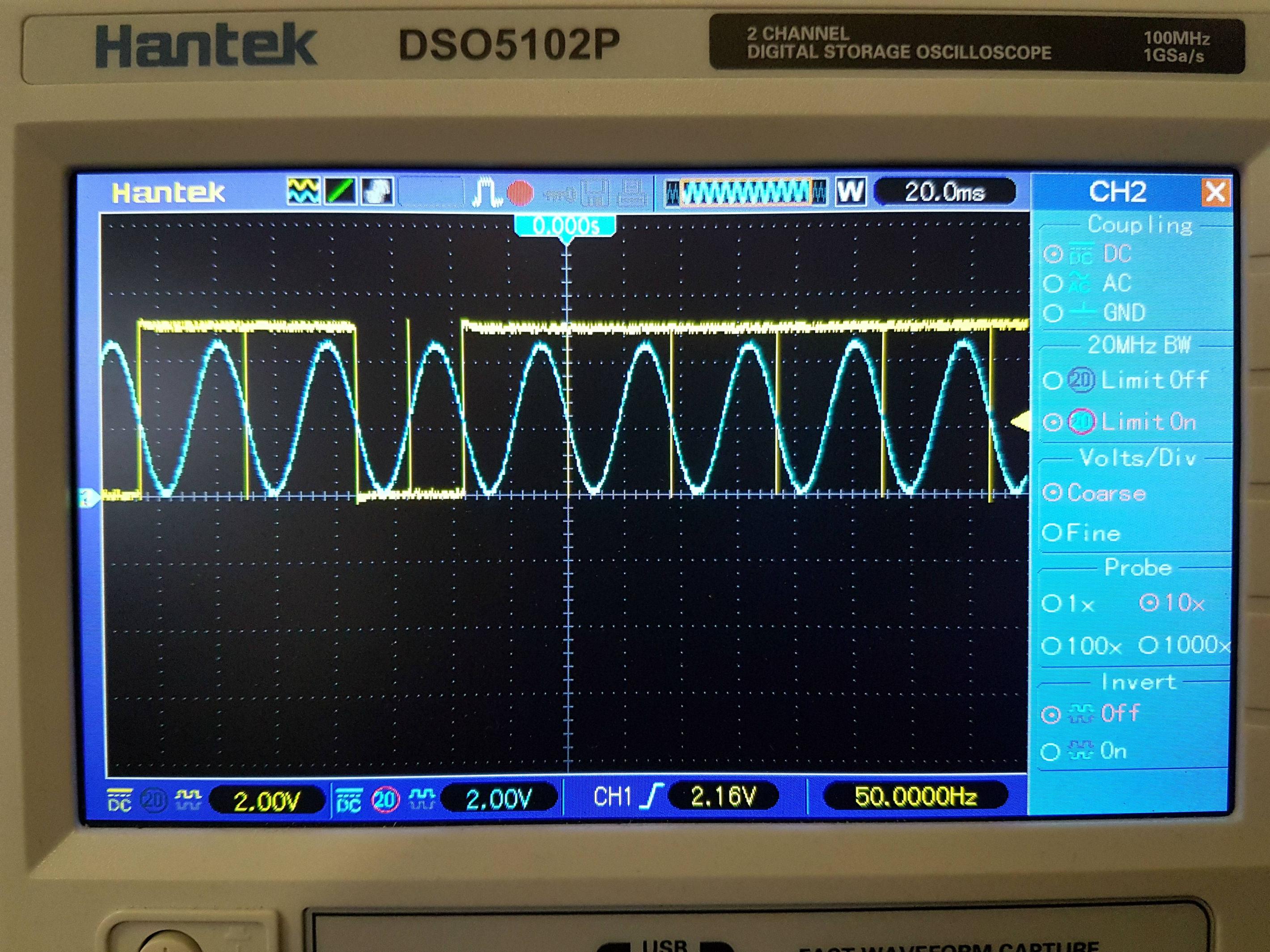 Where as the expected output should look something like this: 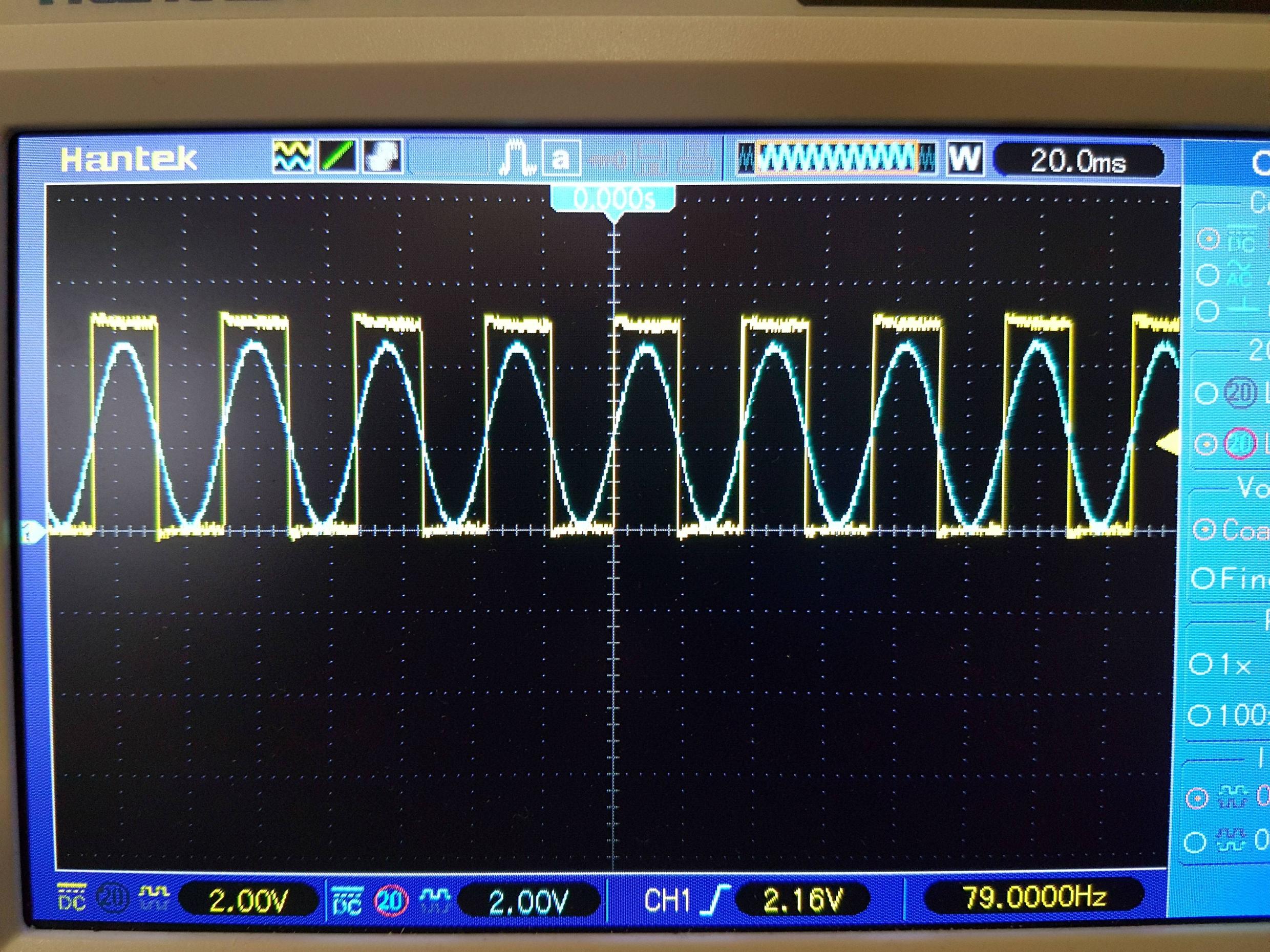 Things I have tried so far:

Some solutions were more stable than others, but none of them were anywhere near acceptable. I have settled with the most stable configuration so far: 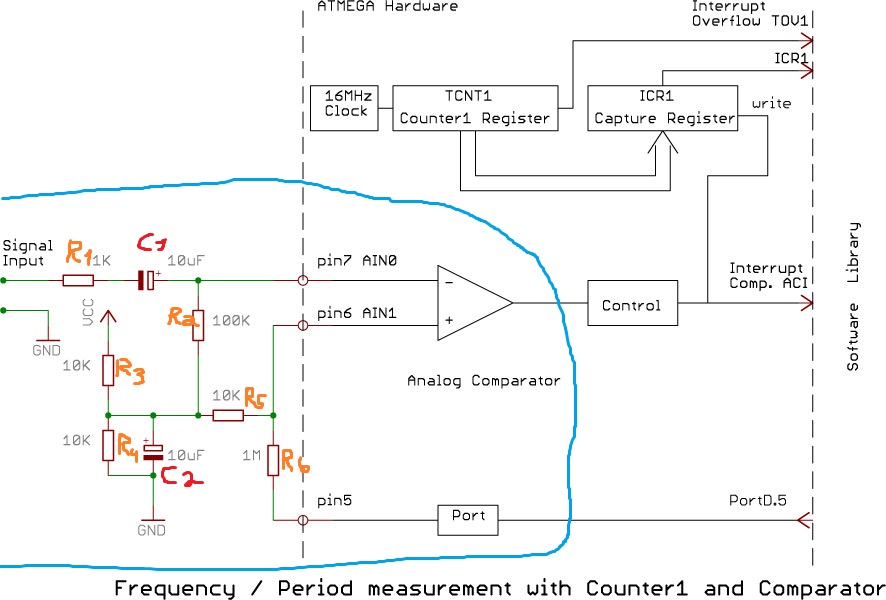 With this setup, certain things improve/change the stability, however still nowhere near perfect:

Changing value of R5 to increase hysteresis. Removing C2 completely (no idea why). Touching wires on the breadboard (quite a few of them next to each other). Switching power supplies from external to USB and vice versa.

At this point, it's either noise, my DAC with which I am generating the sine wave or I am doing something very fundamental incorrectly. This circuit has worked for other people without any issues, so something must be wrong with my configuration or environment.

If anyone has any suggestions, I would greatly appreciate your time.

Also, here's the link to the circuit diagram and the library itself:

I have tried all of your suggestions, none of them worked but one. Clearing the interrupt flags or disabling the interrupts within or outside the ISR didn't really have any effect. I seem to misunderstand how the chip's comparator register actually works.

As you can see, the comparator has two outputs, ACO and ACIS0+ACIS1. ACO is set when + input > - input, cleared when + input < - input. ACIS0+ACIS1 are edge select bits.

I what I was doing initially was checking the edge type in my ISR. I changed the ISR to this instead:

And the output behaved itself flawlessly (just like in the second picture). Then I proceeded to measure width of the pulses but the results weren't great. Intense toggling on my LCD display, numbers jumping to random values or staying at 0, despite having a clean signal. I rewrote my code many times using different conditions, the only semi-stable solution I have got so far is this:

What I did later in the day was use an external comparator instead with the identical setup and source (excluding all the lines related to the comparator). Its output was fed into input capture pin and it worked as intended (didn't even need any hysteresis).

At this point I can say I got it solved by using an external comparator however I have no idea why the internal one doesn't behave itself. I have read many posts and guides on this, read different libraries, tried to imitate them without any acceptable result. The datasheet only has 5 pages on the entire comparator unit, I re-read it many times and I don't see what I am doing wrong.

I would like to find out how to use it properly but if that fails I have got a backup. If you have any further input it's greatly appreciated.

I read that you are using a DAC to generate the sine wave signal. DAC outputs can glitch at the output state changes so you should definitely apply some analogue filtering to the DAC output before feeding it into your comparator circuit. This can help with preventing some of the double interrupt triggers that are likely to be occurring.

I would also comment that you really want to be using an external comparator for this type of problem so that you can apply the hysteresis with resistors without the use of a software interaction. This will also allow better problem isolation since you can directly monitor the output of the comparator.

The issues with this scenario is there is a time delay between the comparator switching and the interrupt being handled to the point where you switch the "hysteresis" pin.

Your hysteresis band is also rather small for that signal level considering what you are using it for. Especially when I see how much noise is on that square wave on your scope.

With both of those factors in mind, there is a high probability that at certain input levels you will get multiple edges from the comparator before you can handle the first one. Checking to see what the comparator state is during that interrupt handler wont help much since it can be in either state.

Unfortunately you have not detailed in the question how the handler works.

BTW I'm not too keen on the way you are using the comparator reference as the bias for the signal. That results in a little cross-talk both from the signal to the reference and from the hysteresis to the signal, especially with low frequency signals. Granted with those values that effect should be small, but for purity, a separate bias on the signal would be better.

EDIT: Re your code.

In the else statement you change the interrupt edge before you set the hysteresis.

In neither case do you pause and clear any pending interrupts before returning. (Note, changing the interrupt control register can create interrupts on it's own.)

I do not know if the Atmega does re-entrant interrupts, that is, if a subsequent edge will interrupt the still running handler from the previous edge. If so you need to handle concurrency appropriately.

Not sure what the PORTC part is for, but it probably needs to move into the qualified part.

This effect is similar to contact bounce, and can be mitigated by the same debounce techniques you'd use for pushbuttons. 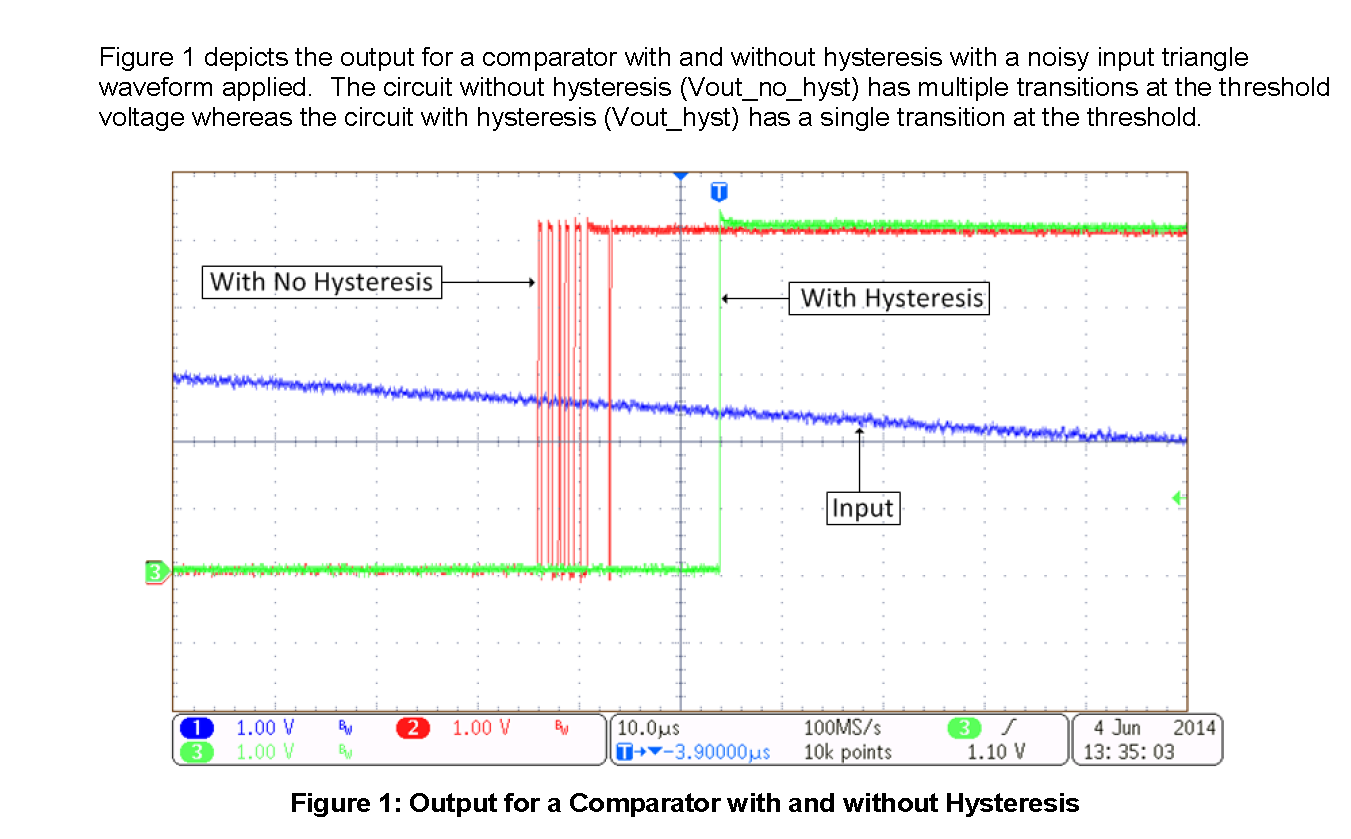 This design note from TI explains exactly the problem of a noisy signal and the need to add proper hysteresis. It's done of course with an external comparator as @Michael Karas recommends and also solves the multiple-firings on negative input-signal transitions i.e. "contact bounce" problem as outlined by the by @Trevor_G and @Dmitry Grigoryev in their answers https://www.ti.com/lit/ug/tidu020a/tidu020a.pdf?ts=1621988309888&ref_url=https%253A%252F%252Fwww.google.com%252F

Not the answer you're looking for? Browse other questions tagged microcontroller operational-amplifier avr noise components or ask your own question.