A basic question about inductor current in a switching circuit

Regarding the circuit below, when the switch is opened very fast according to the formula V(t) = L (di/dt) how can we interpret why the inductor current changes direction?:

During the switch is closed, the current flows in steady state from the upper terminal of the inductor to the lower terminal of the inductor. But the moment the switch is opened the current "wants" to flow the opposite direction. By "wants" I mean something causes it to flow that way. How can we relate this and the formula V(t) = L (di/dt) to explain what is happening more clearly?

This is regarding an answer:

This phenomenon confuses most beginners due to the whole, "A complete circuit must exist for current to flow!" thing. I find it is A LOT easier to understand if you add in the parasitic impedance around the inductor.

With an IDEAL switch, change your circuit and add a VERY LARGE impedance across the inductor, as shown below.

That impedance exists in real life, though perhaps not with the value I chose in this example. It comprises of, amongst other things, air resistance, PCB resistance, and capacitive coupling across the inductor.

In a theoretical ideal circuit that impedance is infinite, but it still factors in, read on.

If the switch is initially closed long enough, a steady state current, in this example 15A, exists in the inductor along with a magnetic field. At this point, since an ideal inductor has no resistance, there is zero voltage across the inductor. The current is dictated entirely by R1 which has the full supply voltage across it.

When the switch opens, the magnetic field maintains the current in the coil in the same direction till it decays.

Now the only place for that current to come from is through the parasitic impedance. That means I-Coil, 15A, is flowing up through Z1. By simple Ohm's Law you can see that there will be a LARGE voltage drop up across Z1.

That puts the top of L1 at a very negative voltage, -15 terravolts with the indicated values.

Again, in a theoretical ideal circuit, the impedance, as I mentioned earlier, is infinite. That makes the peak -15 x Infinite = -Infinite Volts. See, it still factors in.

In reality of course something somewhere will break down before those voltages will be reached. Either an arc will form, insulation will breakdown, or some component will fail.

Of course, since Z1 is large, the LZ time constant is very small, so the voltage spike is very short.

In the real world, the impedance will actually be across the switch.

As the contacts break an arc will be formed due to the high negative voltage on the right side of the switch coupled with the initially very short contact distance. The arc acts like a switch, ionizing the air between the contacts, forming a much smaller impedance across the switch. The voltage on the right of the switch will then be at some less negative level low enough to just maintain that arc. Since LZ is less, the current will take much longer to decay.

In fact, with the wrong kind of switch, the arc resistance can be so low as to allow the voltage on the inductor to rise back up positive close to the supply voltage. At that point the arc will be maintained indefinitely, driven by the supply. Or at least till the whole thing melts or catches fire and falls apart.

The energy from the inductor will be released in the heat of the arc and cooking the switch, and may even blow your power supply.

If the switch is actually a transistor of some type, it will, in all likelihood, be destroyed. This is why you will see folks on here continually reminding people to add fly-back diodes to any circuit driving significantly inductive loads, like relay, solenoid, motor and transformer drivers. Even the inductance of long wires to a purely resistive load can cause the same destructive effect if the switching edges are fast enough and the currents are high.

In your second example..

You have added a low resistance path, the diode, for the current to continue to flow when the left end of the inductor tries to go negative.

That is, when the switch opens the current initially tries to pass through the parasitic impedance. This drives the left end negative as before. However, when the voltage reaches about -0.7V, the diode will turn on and carry the current and hold the left end of the inductor at close to -0.7V.

The voltage on the right side of the inductor is dictated by the voltage drop across the resistor, which initially, with 15A still flowing, is still 15V. 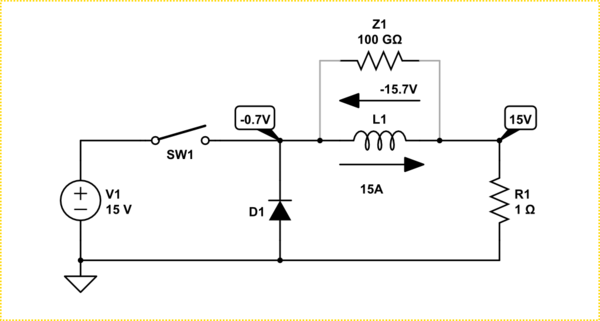 The current stays flowing in the same direction. It's the voltage that changes, to form an arc across the switch if necessary, to 'try to' keep the current flowing at its previous value.

The simple equation \$V(t)=L\frac{di}{dt}\$ shows us that if the current tries to change value in zero time, the voltage will be infinite. In practice, a very small time for the change generates a very large voltage.

Your learning is flawed. Current continues to flow in the same direction until all the magnetic energy in the inductor is depleted by the generation of a spark across the switch.

It's the voltage across the inductor that reverses in order to try and keep the same current flowing.

How can we relate this and the formula V(t) = L (di/dt) to explain what is happening more clearly?

If you apply a constant voltage to an inductor, current ramps up at so many amps per second and the formula that relates the circuit parameters is: -

Theoretically after the switch is opened no current is flowing at all which would cause an infinite voltage Peak across the inductor. Practically the sudden change of current causes a high voltage peak (at the former negative terminal of the inductor) causing a short arc which closes the circuit again and disspates the energy stored in the inductor.

The current won't change directon (as Neil_UK noted). The voltage across the inductor will have, however, opposite polarity as before the switch was opened.

The polarity of the voltage does change.
The polarity (i.e. direction) of the current does not change.

In order to model more accurately (avoiding an infinite voltage peak) what's happening you have to model the arc (which will be quite difficult) or change the problem (e.g. adding a freewheeling diode).

0
Operation Of LC circuit
1
What is the back voltage generated by this inductor in this practice problem?
4
Solving circuit DEs: derivative of inductor current should be zero, but isn't
1
Calculating voltage spike of an inductor
1
About misunderstanding of Lenz law
3
Why is there a sudden change in current between \$t=0^{-}\$ and \$t=0^{+}\$ when an active inductor is connected in series with a relaxed inductor?
2
Inductive kickback
0
Scenarios where Inductor back EMF would result in damage of circuit or component
1
Questions about Inductive Kickback and what causes an inductor to discharge?