I am a bit confused when it comes to Kirchoff's Voltage Law. So, I know that it states that the voltage gain in a loop is equal to the voltage drop. That makes sense as it is simply the law of conservation of energy. However, what I don't understand is how it's applied in one of the loops with just resistors. 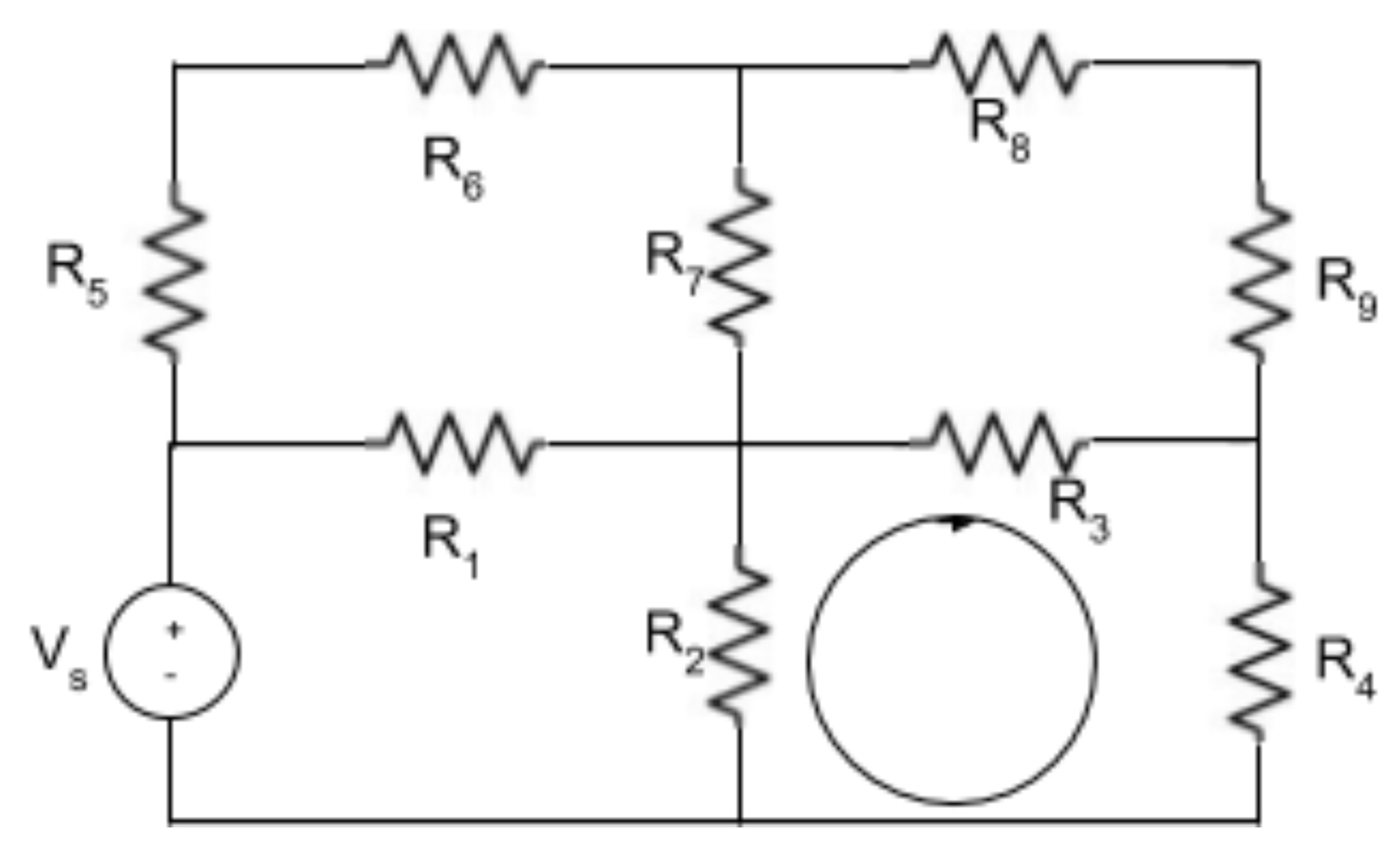 In the loop, according to KVL, the voltage rise = voltage drop. However, resistors do not supply voltage, they only dissipate it. Therefore, I would assume that the voltage drops would also be 0, but according to KVL, there WOULD be some voltage dropped across each resistor. Also, we go in a clockwise motion when doing KVL, but how can we do that if, for example, in one of the resistors the current is moving against the clockwise direction we are using to analyze the circuit? Can we just ignore the direction of the actual current and analyze it in a clockwise direction. If so, why can we just do that?

The currents are fictitious. You could even make up more of them than seem obvious by using loops that wind up duplicating other loops, if you want. But where there are two or more that add up through a single resistor, the actual current will be the sum of each you solve for. The main idea here is to get at least as many equations as you have currents, so that you can solve for each.

Suppose you were looking at a large, complicated looking farmland. It has hills, ridges, lowland sections, dales, etc. There are a bunch of ponds laid out, too. Some dug into the hilltops, some in lowlands, some elsewhere. In between each there are trenches to other nearby ponds. You know that the potential energy of the higher ponds is more than the potential energy of the lower ones and that water will tend to flow from higher to lower. But the system is complex. One thing you can be absolutely sure of, is that if you choose any "loop" that gets you back to the same starting pond, the potential energy there will be exactly the same (of course.) This potential energy is like voltage here. And it impels the water to flow outward from there, at least in some directions.

You could try and work out the details (flow rates and so on.) But it would be complicated. But another way would be to just "assume" a current flows around any loop you pick in order to get back to the start. Obviously, this current would sometimes flow downhill and sometimes uphill to get back to the start. But all of the changes in potential energy from one pond to the next would have to work out so that the sum would total to zero, once this hypothetical flow of water returns.

You also know that if you were to be able to work out these hypothetical currents individually, that where they add up because they flow in the same "channel" from one pond to another, that the sum of these would have to equal the actual current -- if you measured it.

But setting up the equations is a lot more "by rote" this way, assuming these fictitious currents and you can then solve the totality of the system and add them all up knowing that the totals must of course work out to what you actually find in the end.

It just simplifies things to be able to ignore the whole, complex mess and instead focus on each loop one at a time and then combine that result as the very last step.

You could, of course, try and work this out as a "total system" of a great many far less easy to construct equations. And get the same answer. But this way allows you to reduce the problem to a set of much smaller, easier problems that are then just composed together. And luckily, there is a whole field of math that deals with the simultaneous solutions of such linear equations that helps make this last step "doable" also by another "rote" process. So you can combine two "by rote" methods, each one addressable separately and in far less complex ways and still reach a complicated real result.

Just go with the flow, so to speak. It works.

Just to boggle your mind a little bit:

There are a lot of things like this in mathematics, too. I can express the idea that the charge on a capacitor is \$Q=C\cdot V\$. And then, if it matters to be, turn this into a partial differential form of \$\text{d}Q = C \cdot \text{d} V\$ (assuming the capacitor value is constant.) Then, just out of the air if I care about it, I can introduce time by simply dividing both sides of the equation by the differential of time. I get to do this, arbitrarily, too. I just make up the idea that "time happens" and that therefore it can be divided up into tiny, infinitesimal pieces. So the new equation, dividing arbitrarily by another variable of interest, is \${\text{d} Q\over \text{d} t}=C \cdot { \text{d} V \over \text{d} t}\$. Note here that I just made a decision and applied the idea to both sides in order to introduce time. But \${\text{d} Q\over \text{d} t}=I\$, so now \$I=C \cdot { \text{d} V \over \text{d} t}\$, which is also true. But keep in mind that I just made up the idea of time, here. I could have made up something else, such as elevation or the velocity of the capacitor in space or mass or any other measurable quantity. It might not mean as much, but I'm free to do that whenever and where ever I want to.

You can make up these currents, too. In the end, stuff has to work out and in this case the circuits do support the idea of superposition. So all is good.

I think there are at least two misconceptions that cause yor confusion:

It does not matter which way you pick to go round any loop for analysis. It's best to pick the same direction for all loops so as to remain consistent and not confuse yourself.

If the current eventually turns out to be travelling in the other direction, then the sign for that current will be negative.

No, you cannot ignore the direction of current when applying KVL and if you do that,the law will be violated and there will be no same value come at LHS and RHS if you do the analysis. You should maintain one direction either clockwise or anticlock wise of currrent and if the current direction is changed for the resistor or an impedance in a circuit, that value will be treated with negative sign.

3
How do I write KVL in this circuit?
1
Question about thevenin circuit analysis with voltage across voltage source
0
How do I define the voltage drops polarity when applying KVL?
3
What happens when the voltage drop does not equal voltage rise in a closed series circuit?
1
Application of Kirchoff's Laws to circuit with multiple loops
0
Placing just an LED in a circuit?
1
KVL in a BJT circuit
1
Circuit analysis with two loops, resistors, and independent/dependent sources
0
Confusion between Kirchhoff's current law and voltage law