I don't get what's the point of Boost converter, if you just simply need to hook solar panel to battery, why does it not give maximum power point?

The so-called "explanation" is that current varies non-linearly to voltage? Some kind of IV curves, and how you need to change voltage to get MPP.

Formula for power can be written as:

doesn't matter what voltage is! Just make R as big as you can, and voila! You've got the maximum power point! Why doesn't it work that way?

I looked at circuit diagrams for solar panels, inverter and battery. And I don't quite understand why they draw solar panel as "voltage source", this is false.

In reality, you have flow of electrons from solar panel, so it's more accurate to draw current source, not voltage source... Right?

So for simplicity sake, here's circuit:

I1 is current from solar panel, say it's 50 mA, so in order to maximize charging of battery, R1 must have maximum voltage across it, correct?

Since R1 and Battery are in parallel, so they both will have same voltage.

So obviously, I should just make resistor as big as I can to get maximum \$V_{R1}\$, and thus power! What's wrong with this thinking?

The only way this won't work, is if current somehow drops if you increase resistance... but why would it? ... I don't think current coming out solar panel would care... the flow of electrons just gonna keep flowing into load... no matter load's resistance... right?

Here's a realistic curve for a realistic solar "panel" that you can get from a variety of hobbyist suppliers. This particular one has 9 solar cells (a 3x3 grid) wired up in series. 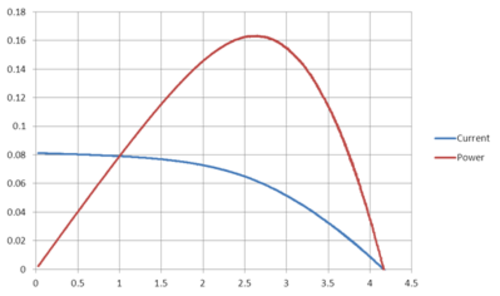 Now, the blue curve represents the current vs voltage for the device. But what does it really mean? Well, assuming full sunlight (whatever that means for this curve) is hitting it, then:

Now, ammeters and voltmeters are ideal devices for the work they do. But they aren't designed or intended to dissipate power from circuits. They are supposed to do their work with the least possible disturbance to it. So they do a job very well. But not the job you want, here.

By tracing your fingers over each point along the blue curve and dividing the voltage at a point by the current also at that point, you can work out what resistor was used there. And you can work out the power. Or you can just multiply the voltage by the current for each point on the blue curve. If you do that, you will get the red curve. This is the power that would be delivered into the appropriate resistor which allows the solar cell to develop a certain voltage and current with that resistor value.

However, the curve isn't the same for any two solar cells. Nor is it the same with different temperatures. Nor is it the same with different light striking it. The blue curve varies with many different situations. An MPP circuit attempts to trace out the curve for you, in each and every one of these special cases (solar cell, temperature, lighting, etc) and searches for and holds near to the maximum power point -- the highest part of the red curve. Unfortunately, there is no specific voltage nor any specific current that always works. So the circuit has to constantly "hunt" around in order to stay close to it.

The problem with your reasoning is that your model is wrong.

A solar cell is a current source - yes - but it's also a diode, which is effectively in parallel with that current source, which starts to conduct when the voltage across it reaches about 0.45 or 0.5V, and conducts well enough to consume all the current at about 0.55V.

As 0.55V is not very useful, most solar panels have several of these cells in series; 36 cells is commonly used for charging a 12V battery, and that would have an open circuit voltage of nearly 20V.

Now you are correct that P = i^2 * R1 but once the voltage across R reaches these levels, the diode starts stealing current, reducing I in this equation. You asked why the current should reduce ... this is why.

MPPT is simply the art of changing R so that you get as much voltage as you can across R before the losses to the internal diode waste more power than you are gaining. It's a dynamic process because the best value depends on the current available, which depends on the (varying) illumination.

A PV is a (solar controlled) current source with a Voc limit and a battery is a voltage sink. As we know from the Max Power transfer Theorem, the max power transfer is when the source impedance matches the load. This is the job of the MPPT controller. to regulate the output current and source voltage such that the impedance V/I matches the load impedance Z = ΔV/ΔI. However there are many methods for MPPT controllers including hunting, but the result is always a match impedance.

Put a panel in full sun. Connect up different resistors. Start with 1 Ohm. Then 2 Ohms, then 3 Ohms, etc. For each resistor, you can calculate the power. It will be V^2/R. What you will find is that at first, making the resistor bigger gives you more power. But at some point, when the resistor gets too big, the power will start going down again. Because you have gone past the maximum power point. Voltage will be higher, but not high enough to make up for the larger R in the denominator. What the MPPT controller does is discover and present itself to the panel like the optimum resistor. A battery can't do that, for example. If the battery voltage happens to coincide with the MPP, that is just good fortune.

The exact maximum power point varies a bit with temperature and brightness of the sun, so the MPPT controller constantly checks to make sure it is still at the correct point to get maximum power.

Not the answer you're looking for? Browse other questions tagged power circuit-analysis power-electronics solar-cell solar-energy or ask your own question.