One of the most recent memory architectures is the 3D-Xpoint which has a structure of the type: 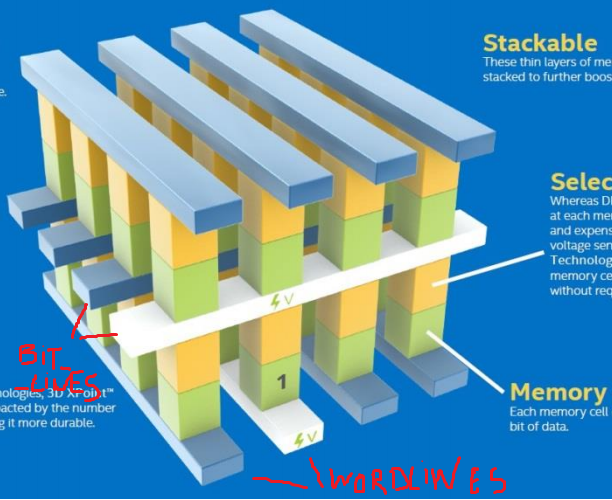 So, you see that as usual in a memory device we have wordlines and bitlines.

Now suposse I want to access one of the cells. For that, I ground one of the bitlines (let's say the white one in the picture) and apply a certain voltage, \$V_c\$, to a wordline (say, the white one). What will happen is that I will access the cell I want to (which has a "1" saved).

My question is: Inevitably, the whole wordline is going to get a voltage. But except for the cell that corresponds to the white bitline, the ohter cells we'll have a potential difference $$\Delta V = V_C - V_F$$ where \$V_F\$ is like a floating potential. But isn't there any problem with this? I mean, isn't there the possibility of a current being released from these cells?

Or the cells are constructed (namely the electrodes) in such a way that $$\Delta V = V_C - V_F$$ will never be sufficient to ativate the selector of the cell?

Microsoft hasn't disclosed the full workings of this memory from the last time I checked so this is what I understood from what we know. When I last read up on this, it's not just the idea of placing voltage on the terminals but electrically changing the properties of the material of the selector and the bit, in particular their resistive properties.

Filling in the gaps:

Now my thought process was that the resistive properties were controlled via a current sent through the bit and a voltage across the selector. To this regard if you do not apply enough voltage across the selector it would not reduce it's resistance enough to allow the system to alter the bit. My assumption is the system would apply the voltage to activate the selector and then perhaps alter the current (depending on 1 or 0) to change the bit from a 0 or a 1.

I mean, isn't there the possibility of a current being released from these cells?

If you are referring to leakage then yes, there will always be a leakage of current but the question to ask is if it is enough to change the memory unit. Even NAND memory has leakage at the gate, but the large amount of charge and relatively low leakage means we can classify it as non-volatile if power is off. Since 3D Xpoint was also classified as non-volatile I would hope similar ideas extend here.

If you are referring to write/read level current then there must be some low resistance circuit, which is a topic I talk about next.

Or the cells are constructed (namely the electrodes) in such a way that will never be sufficient to [activate] the selector of the cell?

Once again, the simple answer would be yes because it is designed so but while Intel hides behind its proverbial curtain, I propose the following two possibilities.

Selector Does Not Engage

Not the answer you're looking for? Browse other questions tagged memory electrode or ask your own question.

0
Where can I find good documentation about memories?
1
Various Memories?
0
Measuring power consumption of cache memories?
3
Is it safe to define a memory section over multiple physical memories?
4
SDRAM structure for Cortex-M7
0
Structure of Larger Memory Modules by using different Size Blocks
0
How memory is stored in memories like SD Card, USB flash drive, etc. that the data stays even if removed to the device?
1
Finding the address of structure knowing the address of one of it's members in C
0
RAM and Flash structure difference
0
Built in Self Test - In Embedded memories