How do I choose a transistor to operate in active/linear mode?

Short version:
I want to operate a transistor (of any type, but presumably MOSFET/BJT) in its "partial" on state to regulate current through various LEDs, but I'm not sure what transistor type to use, nor how to pick one of said type.
I've got two white LEDs in series, plus an RGB LED, so 4 channels total.

I've designed a linear LED driver, with at least a decent understanding of its pros and cons (mainly the con of power dissipation). The main advantages I'm after is entirely flicker-free operation and relative ease of design. I'm doing this for four channels, so going with something more complex such as a constant current buck converter isn't really feasible; that's also likely above my skill level.

I used a low-side MOSFET to regulate the current; the MOSFET gate is driven by a DAC, and said DAC is controlled by a microcontroller using a PID loop. There's a current shunt on the high side so that the MCU can regulate the MOSFET to get the desired current.

Since I want to control this from a 3.3 V MCU, I picked out a MOSFET with a low threshold voltage and low RDS(on) (in case I run out of supply voltage at high currents, and want the entire supply voltage across the load).

This all seemed fine to me, until yesterday, when I learned about thermal instability in power MOSFETs. Apparently, my choice of a low RDS(on) MOSFET is a very bad choice when operating in linear mode, as modern "trench" MOSFETs are designed for fast switching only, minimizing time spent not fully on or off, and can fail catastrophically during extended linear-mode operation -- especially at lower gate voltages (such as in my case of <3.3 V at all times).

I'm not sure how much this applies to me, since VDS < 12 V and IDS < 5 A at all times, and they will never be very high simultaneously. I expect less than 3.5 W of power dissipation worst-case.

After a bit of looking at MOSFETs optimized for linear operation, I could only find ones designed for extreme levels of operation, such as 500-1000 volts at power dissipations of hundreds of watts... and prices of $50 and upwards per MOSFET.

Next, I read up a bit on BJTs, but found other drawbacks, most notably the high Vce(sat) voltages that could cause a lot of waste heat during "fully on" operation. I'd also need either a Darlington transistor or some other combination (perhaps a MOSFET driving the BJT base?) to be able to regulate 0-5 A with a <10 mA output DAC.

How should I approach this? Should I go with a plain MOSFET, since the drain-source current and voltages will never be high simultaneously, or something else?

I will add a schematic soon; adding the entire project's schematic is overkill for the question, so I'll need to draw one up. 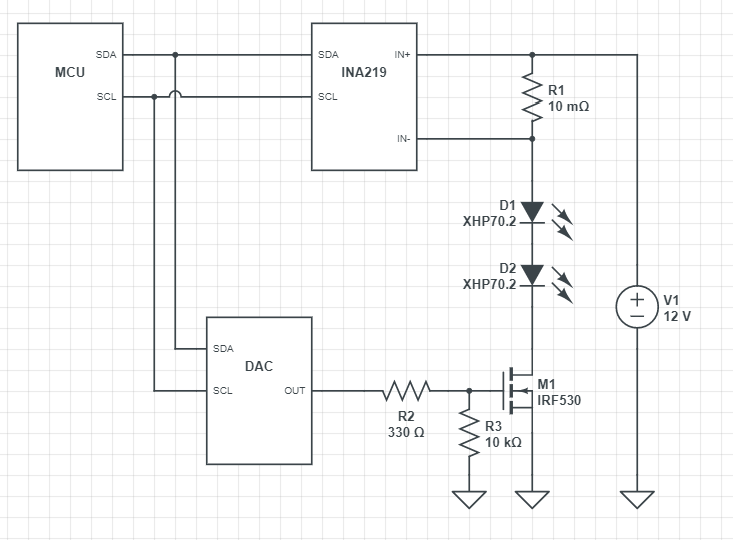 As mentioned, the MCU runs a PID controller to adjust the DAC output; the prototype (on a single 3 mm LED) works fine at ~300 Hz, and settles in perhaps 50-100 ms, which is more than good enough.

This isn't an answer yet, but it was too long to put it in the comments, so here we go.

If you want a linear current sink, use Bimpelrekkie's schematic. This needs tuning, it can be a BJT or a FET, but you get the idea.

Your DAC outputs a voltage that the opamp mirrors on the current sense resistor Rs, which creates a constant current sink.

Since your issue is smooth current control over a very wide range of currents, and especially at the low end, the problem you will run into is:

With your 12V supply and 11.8V LED, this leaves only 0.2V for the transistor and sense resistor.

Therefore, 10µV offset in the DAC/AOP chain will result in 500µA current.

I'm sure your LEDs will produce visible light at this current. If the offset is positive, even when setting the DAC at zero, you won't be able to turn the LEDs off.

Additionally your RGB LEDs have low Vf, so if you drive them from 12V with a linear (non-switching) current source there will be lots of dissipation (efficiency will be 3.8/12 = 31%, so 69% of the power will be wasted as heat in Rs and the transistor).

So, this needs rethinking & planning, more info about the LEDs, how to arrange them in series/parallel to get the best Vf which gives enough headroom for the transistor+Rs without too much waste.

Also you need to decide between a linear and a switching solution.

Not the answer you're looking for? Browse other questions tagged mosfet bjt led-driver linear or ask your own question.

3
Driving P-MOSFET with Netduino
1
Optimal method for multiple MOSFETs for LED driving with a shared power rail
1
How to choose transistor for switching bigger MOSFET
0
How to calculate a mosfet's maximum usable amperage based on a temperature
1
LED Matrix Constant Current Driver with MOSFET and NPN Trans
0
Current too low at forward voltage of power led
2
How can I choose a MOSFET based on Rds? I have understood all the parameters except this