I wired up a latching hall effect sensor to an LED. My power source is a stack of three 1.5v coin cell batteries.

Sensor was working just last night and then all of a sudden I tried it again this morning it is not working.

The only thing that I’m thinking is maybe the batteries aren’t strong enough because the sensor I think requires a minimum voltage of 3.5 V?

Took the leads off and tested the battery and it was showing only 2.5V..

Reason why I am a little confused is because last night I tested it by hooking it up to a very small low power LED which couldn’t have pulled that much power out of the battery...

The front page of the data sheet: - 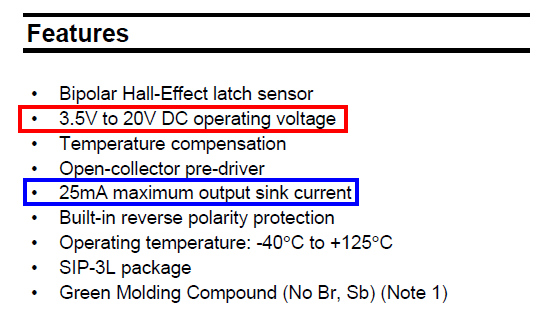 My question is: do these sensors have to have 3.5 V input at all times? Or will it stop working if the voltage drops at all due to low capacity of coin cell batteries?

See the red box above.

Hall effect sensors use a current to detect magnetic fields, This current will pose an additional load on your tiny batteries.

For the ATS177 this means 5 to 10 mA drain on the battery even while the output is off.

If you need magnetic activation, you can use a reed switch instead. a magnet can be fixed near it to cause it to be stable in both the off and on positions.

Not the answer you're looking for? Browse other questions tagged led hall-effect or ask your own question.