Using a capacitor instead of a coil for wireless charging?

So while inductive charging is rather ubiquitous, things like electric toothbrushes and Qi chargers come to mind, as well as to a lesser extent, wireless charging pads for cars, the are all inductive charging systems, basically forming half of a transformer each (the charger is one half, the charged device the other half).

But would it be technically possible to make such a charging setup, using a large capacitor?

I.e. having an AC source connected to a large plate, forming one half of a large capacitor. The charged device would then form the other half of the capacitor.

I understand the distances would have to be rather small, but in cases like Qi chargers, the're right on top of each other anyway. Also, the dielectric properties of the materials between the two conductive plates, would obviously play a role.

But from a purely engineering perspective, why is it a bad idea? One problem I can come up with, is using very high frequencies. The charger side of the capacitor would essentially be an antenna, with the sizes of a smart phone, that would mean frequencies in the 500MHz-3GHz range. I assume it'd be simply too complicated to use a signal generator at these frequencies to send sizeable amounts of power?

First point: A transformer has a built-in return path, so you have a complete circuit. That is to say, it has two wires on each side, so current can flow out through one and back through the other. To make an equivalent device with capacitors, it would be need to have two of them, one for out and one for return.

Next lets put some rough numbers on. For a phone, you have an area of about 5000mm^2 for each capacitor. If you put the capacitor plates near the surface, then you might get a gap of 1mm and the plastic case could be engineered with a dielectric constant of say 10. That works out about 0.4nF per capacitor.

Now lets think about transferring power through that. At 1kHz the impedance would be 400Mohm. At 1MHz, it would be 400kohm, and 1GHz it would be 400ohm. That sort of high frequency causes lots of headaches around avoiding interference with other devices. And at any real power, not microwaving the user. And even if you go all the way up to 1GHz, then you still have to deal with a relatively large impedance. To get a watt flowing through the capacitors will need 30V.

So the engineering problems are probably not insurmountable, but it is still much easier (and therefore cheaper) to use an inductive method.

But would it be technically possible to make such a charging setup, using a large capacitor?

Yes and almost commercially cheaper than inductive charging (but that's what makes it unattractive).

If you had two parallel plate capacitors (for forward and return current) of 1" cross sectional area each and a spacing of 1 mm between phone and charger you would have a total series circuit capacitance of about 2.7 pF (yes pico farads).

If you series tuned this capacitor with a 10 uH inductor you would get a resonant frequency of 30.6 MHz and pretty much a low impedance path this presents.

This means you can transfer power at relatively straightforward frequencies without a sizable "plate" of capacitance. You don't need large capacitance.

The "oscillator" frequency could rely on the tuning of the L and C so if the capacitance was say 1.35 pF (twice the gap), the oscillator would naturally swing to a frequency of 43.3 MHz to keep tune.

If the phone is not present this can be easily detected so there wouldn't necessarily be an interference problem. You could design the oscillator to not work beyond a limit frequency (say) 50 MHz and it would only swing back into action when the phone was stowed.

The difficulty is cost - making a 10 uH inductor that had low loss and a resonant frequency above 100 MHz isn't going to be as cheap as any old coil of wire running at 13 MHz coupling a magnetic field. So, I would say mass-market cost drives down this idea and not technical feasibility.

It is not only possible, but practical for some applications.

Here is an experiment I did comparing coils to plates for lighting an LED across a ~1mm gap... 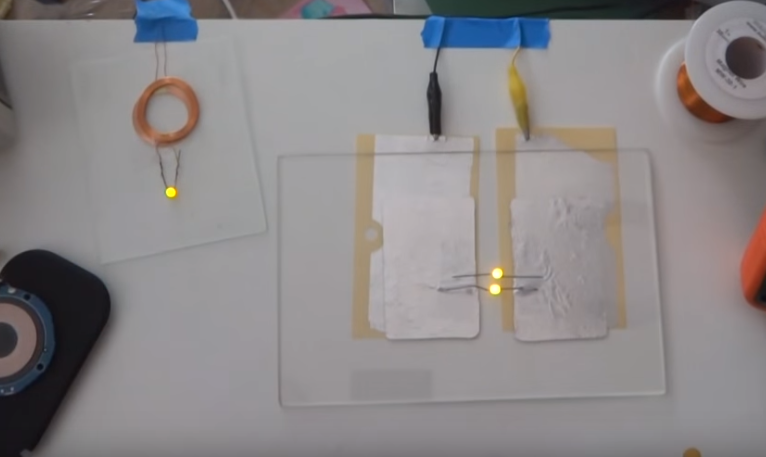 There have been cases where I've picked capacitive coupling over inductive coupling to charge batteries when the the geometry of the product happened to offer large surfaces that were good places to put the plates. A layer of foil or sprayed on conductive layer can be much cheaper and easier to manufacture than a coil.

Here is a commercial module able to transmit multiple watts across a gap capacities with a small plate running at high frequency...

Not the answer you're looking for? Browse other questions tagged capacitor charging wireless-charging or ask your own question.

5
Battery charging circuit Q
2
Is the efficiency of (Qi) wireless charging affected by a metal surface?
0
Automatic charging a capacitor to an adjustable voltage level, for impulse LED driving
2
Use of very large bulk capacitor for microcontroller power stability
0
How do the Capacitors get charged in a Half Bridge Inverter?
1
Extend wireless Qi charging with a coil in the middle