Follow-up to: Is it okay to use a MOSFET in its resistive region with a heat sink?

Both PWMs are 8-bits. The high power part PWM1 will take over when the low power part PWM2 reaches a certain level. In fact, the "low power" part of the circuit could drive the light from 0 to 100%, but that half of the circuit (left) is analog, and I can't easily model the brightness. Hence, at the level where I no longer need extremely small gradations, I'll switch over to driving the light with PWM1, which is mathematically nice but incapable of the extremely low power needed for the early steps.

Is this a reasonable circuit to drive a transistor Q2 with both a PWM signal (PWM1) and an analog voltage (after a low-pass filter from PWM2), but not at the same time? 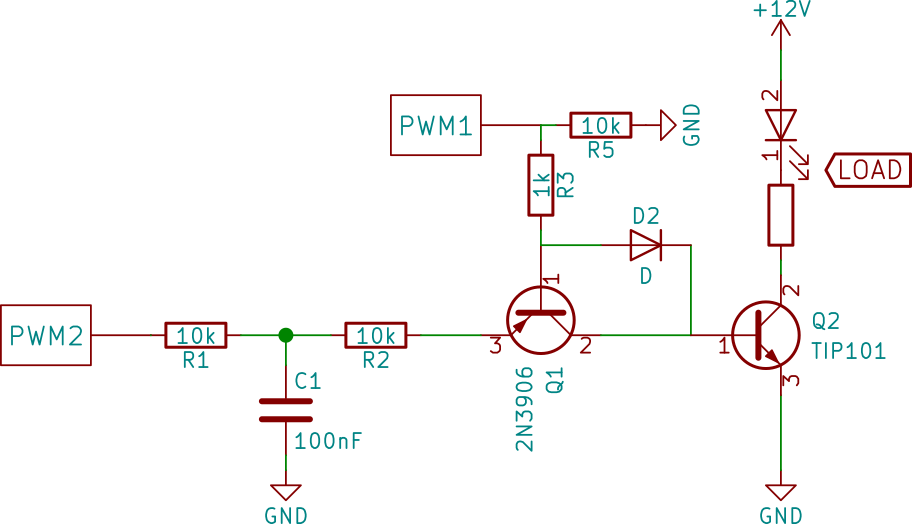 Potential solution: maybe with a diode, capacitor, and a couple resistors, I can hold the base voltage of Q1 high when PWM1 becomes active, even during the off-portion the signal.

The proposed circuitry solution is needlessly complex, and will not be economical to prototype or produce. The entire premise of the question is not fully convincing, but accepting it at face value, there are far better ways.

The advantage all of these have is that the output to the PWM power modulator is a signal from a single MCU pin. At most, triggering one timer from another requires a single loopback wire or resistor from the output of one to the trigger input of another.

This is not intended to be a complete DIY solution but background needed to design your specs for the desired transfer function at low levels, high levels and the entire range. You may want to test the actual current values from 9 to 14V and see what values you want for each PWM level. 10 bit resolution log resolution may be ok or not.

The psychophysics of human response gain and exponent. https://en.wikipedia.org/wiki/Stevens%27s_power_law

An analog lower current solution with some theory. http://www.presepioelettronico.it/Public/data/amministratore/20141214144447_AntiLogDrive.pdf

When implementing Op AMps, you must be concerned about Input & output common mode range limitations for BJT OpAmps as Rail to Rail are good but tend to have low output current.

The transfer function of a commercial Sunrise alarm clock with brightness & alertness vs alarm time. Brightness need not be full when waking up, to give time for eyes to respond. An hour may be too long for most workers.

This a modified S curve.

Not the answer you're looking for? Browse other questions tagged pwm gate-driving or ask your own question.

16
Is it okay to use a MOSFET in its resistive region with a heat sink?

2
How can I convert an irregular PWM signal with a duty cycle of 95 to 99% to an analog signal?
0
Arduino Motor Shield R3 Current sensing
1
Sin signal from PWM
2
One PWM timer to two outputs?
0
PWM (Pulse Width Modulation) vs DAC (Digital Analog Convertor)
1
5V PWM 0-100% duty cycle output should generate 0-100mV
16
Is it okay to use a MOSFET in its resistive region with a heat sink?
0
How to increase the dimming range of mosfet controlled LED
2
Detect ring signal using a low pass filter