What's the purpose of the diodes in this circuit?

I'm trying to get my head around the headlight wiring in my car, and I'm curious what purpose the two diodes in this diagram serve. Hoping one of the clever people on here can explain it for me: 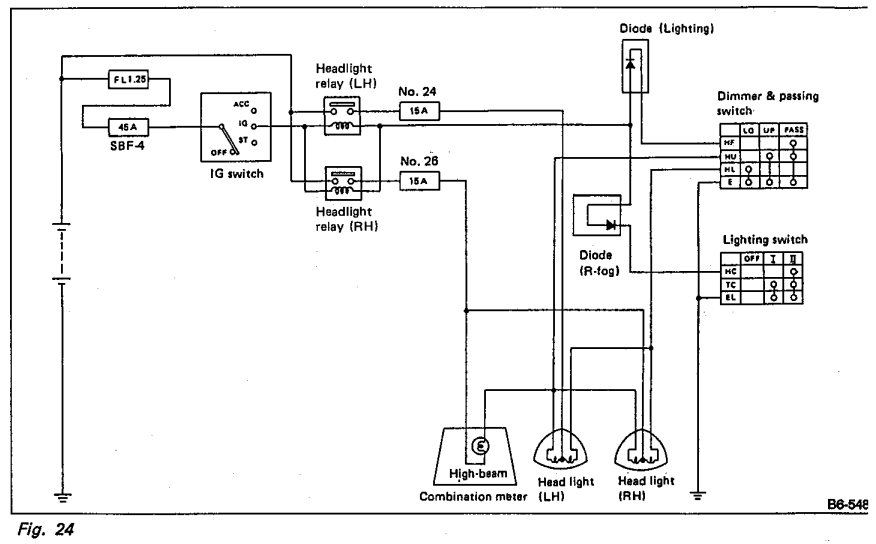 Is there purpose evident from this diagram or are further related diagrams required?

The diodes are there so that there can be two separate mechanisms for enabling the main headlight relay without interfering with each other. From the labels on the right, it looks like the two mechanisms are the normal headlight switch, and the momentary passing switch, which makes sense. You want each to be able to turn on the headlights independently.

You now say you are looking for more of a low level electrical explanation of what the diodes do instead of the high level conceptual explanation you originally asked for.

The diodes allow either switch to turn on the relay, but still remain independent. Presumably at least one of the switch lines is used elsewhere in a way that it shouldn't be signalled when the other switch is activated. Without the diodes, there would be only a single switch line, and that would be activated identically by either switch, making it impossible for other parts of the system to determine which user action caused the headlights to turn on.

For example, the general headlight switch may also turn on some running lights or maybe a indicator on the dash that the passing switch is not supposed to turn on. With the diodes in there, the general headlight switch line remains unasserted when the passing switch is activated. Each switch can activate the relay, but there is no connected between the switches.

The diodes on the circuit are working as a OR gate.

The relays are activated when at least one of the switches is on.

In Logic Theory... since the voltage V+ is direct connected to relay coil and switched on the "Low Side" or V- and the diodes are also switch by either source going to V- , we have a logic specification defined as " if either input goes lo,the output goes lo" By rules of Logic and conversion to positive logic, this actually an AND GATE function. ... Meaning that when both inputs are high the output is high in the OFF state.

If you may recall from logic theory, if you invert the inputs and the outputs, you transform between the AND vs OR gate.
The 3rd diode is a typical back EMF clamp diode on the coil. 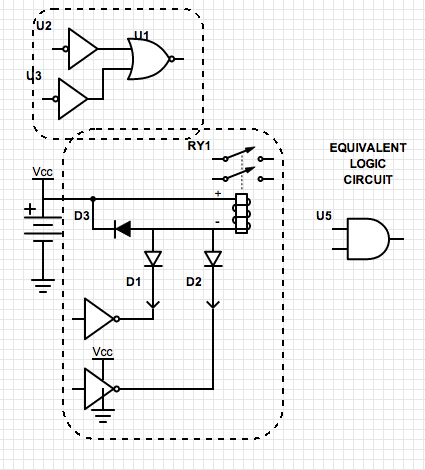 So technically the diode OR logic with inverted logic active low inputs is an AND gate for turning off the light.

As Olin correctly points out the isolation of each driver is important for many reasons such as fault isolation. Wire OR or Open collector or Open Drain (Low Side Switches" would also work without diodes, but fails to permit ease of troubleshooting and sense with self-test or BITE (built in test equipment ) by design for reliability of isolating faults. The trend in Automotive Design for reliability is enhanced now with fault isolation on electro-mechanical parts and drivers, such that isolated driver states can be sensed easily for feedback.

After pondering this some more, I have an alternative theory which might explain the Lighting Diode. As others have pointed out, the headlight relays will be energised when either the Lighting Switch is in position II (position I is parkers only) OR the dimmer/passing switch is pulled to momentary on (flash/pass). This is fairly straight forward and I haven't accepted any answers yet as I'm not convinced the diodes have any role in achieving this OR arrangement as they would effectively be disconnected from the circuit by the switches when not activated.

The dimmer/passing switch is a fairly substantial switch and you can see that despite the circuit having headlight relays, the full low or high beam bulb current still flows through this switch. The Lighting Switch however is just a small rotary switch on the end of the stalk and it only passes the relay coil current.

If both switches are turned on (so Lighting Switch to position II and you also flash the hi-beam), then without the lighting Diode I'm thinking it would be possible for the hi-beam bulb current to pass from HU to HF and to earth through the Lighting Switch. I guess this could happen if the contacts between HU and E got dirty or whatever and became higher resistance than the path through the lighting switch?

What do you guys think? Would this make any sense as an explanation? It doesn't explain the Diode R-fog but from the name I'm wondering if it serves a similar purpose to do with the fog lights that's not really indicated by this diagram?

the diodes are there to cut down on the amount of copper wire required to run everything independent - save on wire -save on weight -better fuel economy I think that is the simplest explanation.

Not the answer you're looking for? Browse other questions tagged diodes automotive or ask your own question.

0
Correct use of diodes in car stereo
2
Trying to understand flyback diodes and general diode orientation
0
Why are two diodes used here?
2
Trouble understanding this 'simple' circuit
1
Help with wiring OEM LED turn signals that has 2 voltage inputs
0
Rectenna - What's the Purpose of the Capacitors?