Heat sink on the bottom or on the side?

I am considering a thermal design and due to space requirements I was considering different orientation of the heat sink, namely putting it bottom down, obviously, and puttin it on the side as in figures provided. I've seen a similar approach with water cooling but I am wondering if this would work as well and if the cooling effect is the same? Anyone had any experience with this? 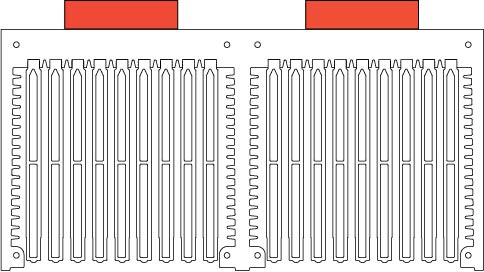 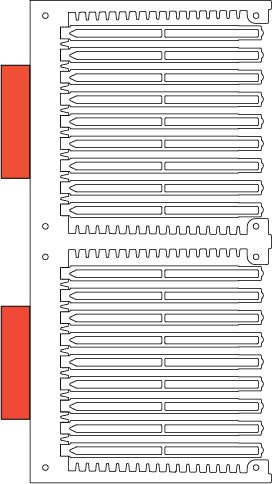 An orientation that puts the cooling fins vertical will give a better cooling effect if the airflow is not forced (by a fan).

Hot air rises so you get better airflow over the fins if they are arranged vertically,

If the airflow is forced you will get better airflow if the fins are aligned with the direction of movement of the air.

Due to the thermal conductivity of the heatsink there will be very little difference in the vertical or horizontal positioning of components relative to the heatsink position.

When it comes to orientation of a heat sink, you need to chose whichever method gives you the best airflow over the heat sink.

Heat-sinks work, primarily1, by transferring heat through a large surface area to the ambient air in contact with that surface. If the air can not move, the air quickly heats up and heat transfer from the metal drops off.

As such, you want the air to move, or be driven, through and away from the heat-sink as it heats up. Hopefully to be replaced with fresh cooler air.

As such, if it is not a forced air system, you need to align the fins of the heat-sink so air can rise up between the fins as easily as possible2, so a flow can be established.

Of your images, perhaps you can see that in the first one, hot air will collect near the top, so efficiency is reduced

The second image is actually not that much better since air coming out of the heatsink is obstructing air going in.

Your ultimate is the third orientation you have not shown... 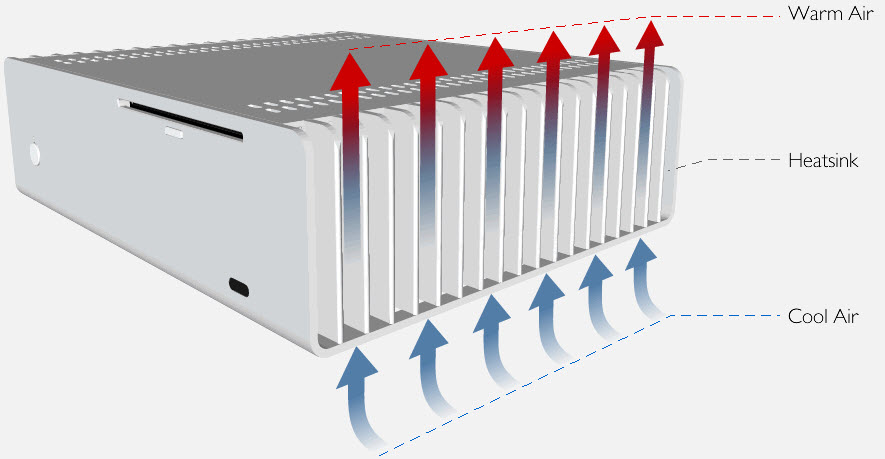 If this is a forced air system, again, you need to arrange the fins so the air is blown between them in the same manner. Orientation then becomes "orientation with respect to the primary air-flow".

Also. I have to mention, you need to exhaust that hot air somewhere. Just circulating it around inside a box only delays over-heating.

You should also read my other answer here.

1The other transfer method is of course radiant heat.

2Some turbulence is actually a good thing. Air that passes through that does not make contact with the surface performs little cooling. As such :

I concur with all of Trevor’s excellent answers and would like to add that compressed air and it’s velocity under fan pressure are key to air conduction but still poor compared to water.

Air speed at surface is critical and not just CFM. Velocity is improved with surface eddy currents and vortexes while heat pipes stretch the emiiter area better than fins resulting raising the flow impedance or improving heat conductance.

Air velocity can reach a saturation limit but is worth find what that is. It also aids in exceeding the striction level of dry dust which lowers flow from accumulation. This is why high vacuum pressure flow is preferred over push flow but demand a different fan load profile design for flow and pressure. eg compare a high RPM vacuum vane air pumps to a squirrel cage blower fan. Or test with your vacuum cleaner exhaust vs intake.(. If you have an Electrolux)

Not the answer you're looking for? Browse other questions tagged heatsink cooling or ask your own question.

7
How to cool ICs?
9
Pour-and-drain conformal coating as an alternative to potting
2
Is Rja in parallel with an external heatsink?
5
Experience with thermal glues/adhesives?
1
Designing a copper plate heat sink
2
Heatsink or IC: how to determine root cause of overtemp?
0
Efficient cooling system for a DNA Analysis thermal cycler
33
Optimize heat sink design - connect cooling pad on PCB backside by vias
15
Is a thermally conductive pad always useful between TO220 and heat-sink?
1
Three phase rectifier heatsink