I usually understand well transistors circuits, but I just can't get to work with this one: 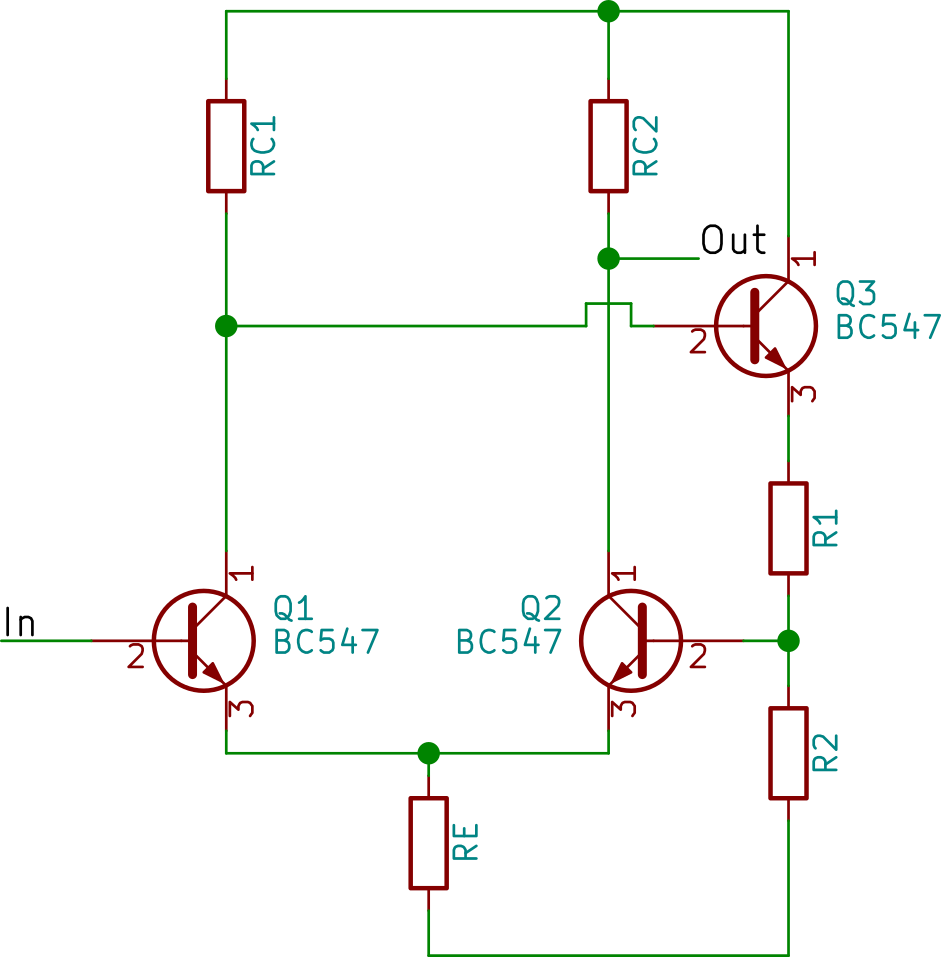 I could find an approximative formula for negative trigger, which is triggered when Q1 become cut-off:

I'm also open to other circuits, if you mind something simpler (not using op amps, please).

it is most simple to understand by first looking at a simpler Schmitt trigger circuit, luckily it is there in the image, this is what you have there is just an enhanced version for more hysteresis.

so the new simple circuit is what you have but with Q3, R1, and R2 removed. Q2 is connected to where Q3 is connected in the original design, below RE there is the ground. RE is of a very low resistance since this more simple version might not work if the hysteresis becomes too big, RC1 and RC2 are bigger, RC2 is smaller than RC1, however, they can be of equal value because the transistor will cause RC1 and RC2 to act like parallel resistors on the RC2 side(assuming low resistance base-emitter). 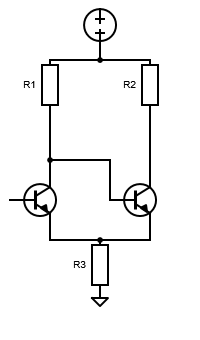 (output is between R2 and the transistor below it similar to in the design you showed.)

This is how you can see it as a voltage divider, Only the left transistor is put into consideration in this image for simplicity, for your input on a general scale only the left one is important when viewing it as a set of 2 voltage dividers. 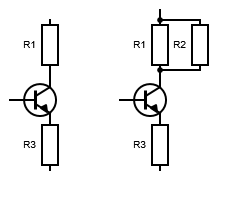 the design you showed is similar but Q3 is acting as an. amplifier, and even more so it isolates the input for Q2 from the voltage divider's effect, because in reality Q2 is also slightly affected by the voltage below it, and the design you showed has its own voltage divider with a set value for switching Q2 on and off, likely this is to make sure the voltage is always above the voltage below the transistor since that makes it more reliable when there is more hysteresis. so the transistor and resistors on the right mostly make sure it becomes more stable with higher hysteresis since the one I showed will work with a small % of hysteresis but will eventually become less stable when the resistance or R3/Re is too high in comparison with that of those above.

I simulated it in my mind and it worked there and worked in the way described. so it works. I didn't add formulas since they are often very depending on what components you use and what resistance, but even more tolerances since in reality most parts aren't perfect and they behave more analogue than they do in the formulas which is why for me performing a mental simulation tends to bring it closer to reality than calculations or a digital simulation does. "tends" because I need to know the part and have experience with it, reading the datasheets is one thing, but by using them more in a real-life it becomes much more accurate. since I do not have experience that I know of with the BC547, I used the BC337 instead. I did not test it to much for in what ranges it will work in the mental simulation but I found that having R1 and R2 at a similar value and having R3 at a value of 10% or smaller of theirs will make it work well enough, didn't go much higher because like I mentioned things like tolerances play a role and in this specific design especially a lot. when simulating it with MOSFETs or transistors which have a high base-emitter resistance R2 should be lower than R1. note that I might have messed up things during the writing, I don't always know what I did and didn't write, and my mind doesn't follow a chronological order meaning that things to write in the future, past, and now easily get messed up, this especially combined with distraction can cause parts to not be written, or to be unclear. so if you notice something which seems hard to understand then please mention it I will likely try explain it in a more normal communicative way, or correct it to follow the traditional patterns(because I know many people can not follow things when I accidentally approach things non-chronological or similar , or to add things I forgot to write.

1
Schmitt Trigger Functionality Not Working, Questions
0
Some questions on optimizing a Schmitt trigger to eliminate possible glitches
0
Processing an analog signal to square wave using a SN74LS14 Schmitt trigger?
0
Why do I get a triangle wave in this Schmitt trigger oscillator?
0
Really occasional malfunction of the Schmitt-trigger input
0
Positive edge detection triggers on negative edge too
0
I need help debouncing a push button
2
Ideal v. Non-Ideal (?) Schmitt Trigger Transfer Curve