Are these two transformers the same?

I am wondering if I can use two normal transformers to form a center-tap transformer..

I am trying to get the left transformer working as the center tap transformer: provide positive and negative voltage at pin 3 and pin 4 with pin 5 connects to ground. 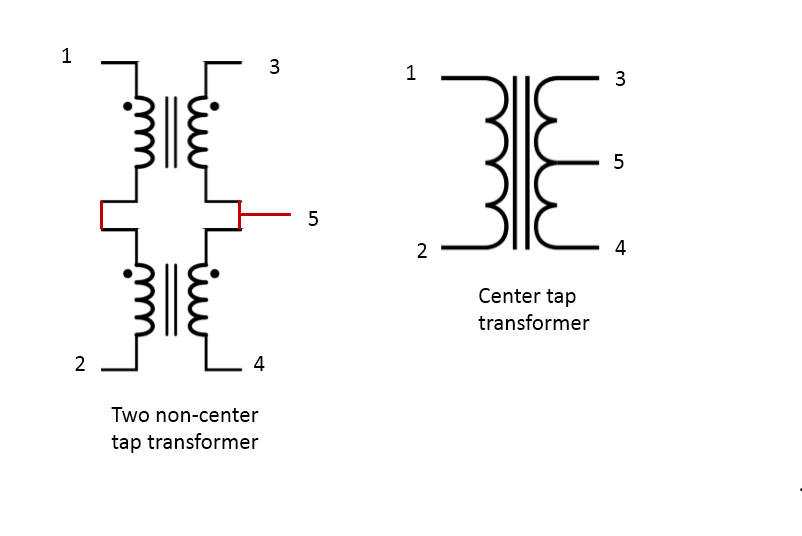 I think the wording of your question is leading some readers astray.

You can indeed use two identical transformers to give the effect of a single centre-tapped transformer. You would connect them like (assuming 120V/12V transformers): 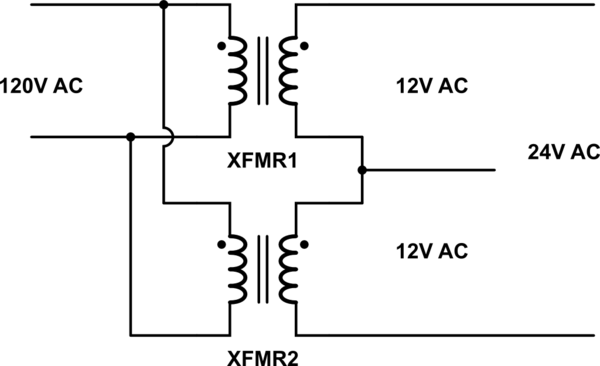 If the full output is zero rather than 24 volts, reverse the secondary connections on one transformer.

You can also buy transformers with dual primaries and dual secondaries - they can be connected as above, or with the primaries in series for 240V input.

With light-loading conditions, the dominant current flowing through a transformer’s primary winding is the magnetisation current or, put another way, current due to the primary inductance and its reactance. The magnetisation inductance is not so well defined; one transformer might be 10 henries while another (from the same production line) might be 20 henries. This would lead to big difference in the primary voltages under light load conditions.

For instance, with the inductance difference as above, one transformer primary would receive two thirds of the overall applied voltage. This means that it’s secondary would produce a voltage that is twice the voltage compared to the other transformer’s secondary.

Would this happen with a centre tapped secondary? No, because the magnetisation flux in the core is common to both split halves of the secondary and, because of Faraday we know that voltage is proportional to the number of turns hence, either side of the centre tap, the voltages are much more equal even with big loading asymmetries.

Putting the primaries in parallel is a big step to making things more similar.