How to solder PCB?

I have maybe question because of my first PCB I soldered yesterday.

However, during soldering, I noticed a few things and wonder what is best:

What are guidelines to make those 'interconnections' between adjecent holes?

And a side question: this is a 'double' sided board, but I don't see what it means, since the holes are connected anyway from the top and bottom side after soldering. Or do I miss something here?

There was a discussion about my 'ascii' notiation... I will explain it a bit below.

The problem is, that I never have soldered on a proto/pcb/stripboard whatsoever, only did breadboarding. Since I want to be sure I don't mix up lines/columns, I like to make it visible before I start (and to see it fits).

I will leave the ASCII text above, however, to make it clear, I thought it's better using Excel. I also spaced out the colums more, so it's easier to solder.

The result is below.

And a side question: this is a 'double' sided board, but I don't see what it means, since the holes are connected anyway from the top and bottom side after soldering. Or do I miss something here?

Yes, the green PCBs have their holes connected on both sides, before and after soldering. Calling it "double sided" is very misleading, but "true" in some sense.

This question will gain several opinion-based answers, anyhoo... disregarding that, this is what I recommend. Might be interesting since I use the exact same boards as you. 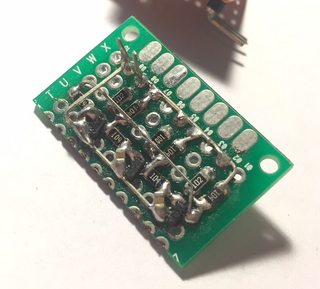 Circuit I made and used as blueprint (ish)

(Ring inverter with LEDs on the other side)

As you can see, I don't limit myself only to the plane of either side, I also go up a couple of millimeters and use that space as well. The metal pieces are from trimmed LED legs and large round resistors - no, I haven't ruined tons of LEDs so I can have small legs that work great with soldering. I simply don't throw away the legs of LEDs, I reuse them and cut them accordingly. 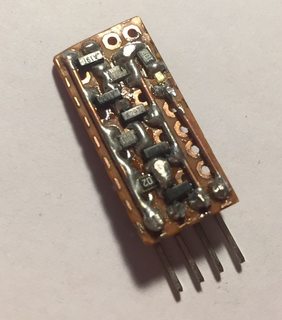 Circuit I made and used as blueprint

But using regular uninsulated copper wire works great too. Notice how I use the holes as a meeting point for two or more components. You usually don't need to space things apart. SOT-23 is great for 2.54 mm spacing.

(Modified version of this one that actually worked IRL)

I assume you are going to work with ICs - use their legs as well. 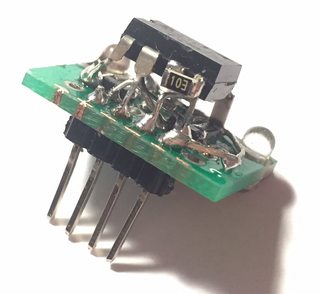 Circuit I made and used as blueprint

It's ugly, but it's your ugly thing. And you can't say that something you made is ugly, therefore it's handsome.

You probably cannot see it, but legs 3 and 5 are connected underneath the IC and soldered. (IC = LM393)

On the other side there are two transistors, and again I use the holes as nodes / meeting points. I rarely connect pins to different holes and then bridge the connection.

is it best to use some small wire instead?

Yes, definitely. "Solder blobs" tend to get bad over time. Or use the solder-tinkerer's all-time favourite: cut-off through-hole component legs. They are awesome for such purposes, if you don't need/want the isolation provided by a wire.

Regarding the nature of the PCB, there's different kinds, either with pads (that may or may not connect to both sides) or with "copper lines", where all holes along one row are connected. 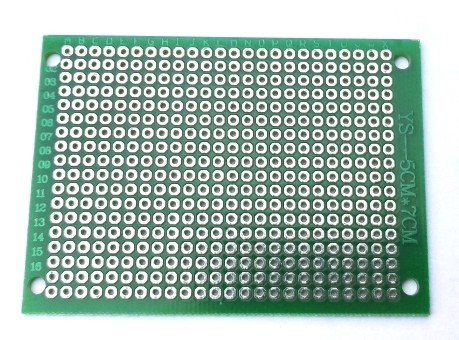 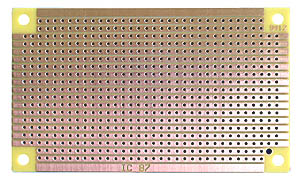 Which kind to use mostly depends on the circuit, and on personal preference. The version with "lines" is convenient when tinkering with through-hole ICs, but in the general case I personally prefer the version with "pads", as that gives more freedom. Often when building lab stuff you need to modify something, and it is convenient to do so without having to cut and carve in the actual PCB.

As you noticed the solder blobs look real messy.

Using wires with a plastic coating is problematic and too much work unless you have large distances. You have to cut the wire to length, strip the ends and hope you didn't cut to short or long.

What I recommend is Magnet wire. Which is wire that has thin varnish. Usually (and you want that) the varnish is heat sensitive. So just by touching the end with the soldering iron for a few seconds the varnish disappears and you get blank wire at that point.

Using Magnet wire you can simply solder on the wire and cut the ends after soldering and you don't have to care about causing a short when the middle of the wire touches anything else.

I sometime use silver wire or (insulated or not) copper wire for the interconnections. When the copper pads you want to connect are directly next to each other you can use a 'solder blob' (2.54 mm grid or less). In my opinion it looks much cleaner if you use a silver wire which you stretch a little bit (make it straight) for wider interconnections.

Double sided means that you have copper pads on both sides. The advantage over pads on just one side is that you are able to solder on both sides. With one sided you can only place your components (throughhole leaded) on one side.

This is the case for printed circuit boards with a point grid or another grid.

2
How do I build a system for localizing sound source?

3
PCB has strange looking pads, how do I solder them without impacting nearby surface mount components?
1
Double side PCB with solder via?
1
How to solder under already soldered parts?
3
Removing PCB from complex pattern of soldered-in thru-hole posts?
12
How much larger should a plated-through hole be than lead diameter to get good solder wetting?
3
Methods for removing solder from inside a header socket
2
Possible to Solder top of through-hole header?
2
Do I need to solder snap in through-hole connectors?
1
What solder for low temp removal and resoldering to pcb
10
How To Repair Ripped Off Solder Pad On PCB