I have some questions about using capacitors with an L7805CV

According to the datasheet, on page 4, it shows I need:

I bought a few sets some time ago with 'common' values and what I have (amongst others) are 100 nF ceramic capacitors.

That datasheet is pretty poor compared to others, which will usually explain the range of capacitance and ESR acceptable for the device. Sometimes using a 100 nF ceramic capacitor can be a problem because the ESR is so low, that the regulator is not stable. It is possible to add a small resistor in series to the cap to increase the ESR to get into the stable range instead of going for an electrolytic one.

There are two footnotes hidden on page 27, which will give you a bit more information:

So basically if you place it close enough to your power source (low inductance path) you could get away with no capacitors at all.

On the other hand I also interpret that, that the value isn't hard set. So you could go for a higher input capacitor. I usually place a 1 µF and 100 nF ceramic capacitor on the input and something like 10 µF and 100 nF on the output. Some regulators want a 100 pF capacitor very close to the leads to reduce noise.

Place the capacitor with the lower capacitance closer to the device for better noise / EMI performance.

And because it is buried even farther (page 35), make sure to comply to this note as well:

Application with high capacitance loads and an output voltage greater than 6 volts need an external diode (see fig. 32) to protect the device against input short circuit. In this case the input voltage falls rapidly while the output voltage decrease slowly. The capacitance discharges by means of the Base-Emitter junction of the series pass transistor in the regulator. If the energy is sufficiently high, the transistor may be destroyed. The external diode by-passes the current from the IC to ground.

So if you place a too large capacitor (how large is too large? I don't know, could not find a value) or you go above 6 V (not applicable for you), you have to place a diode across the regulator to protect it. 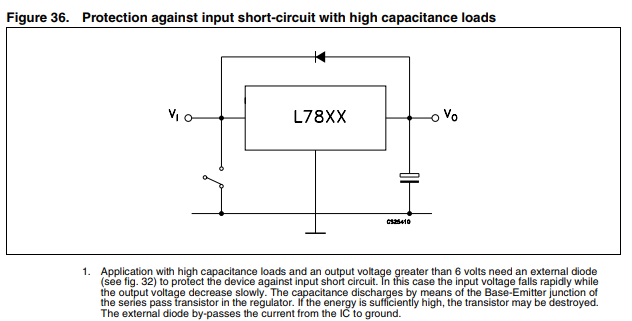 The input and output cap values you show are from examples in the datasheet. They are not absolute specs.

You can put at much as you want on the input. A linear regulator should be able to function with a input voltage that has 0 impedance. I would put at least 1 µF ceramic (good at high frequencies) there, although more is at least marginally better. In practice, I'd use the highest mainstream capacitance value for the input voltage that is available in a convenient package, like 0805. For most uses of a 5 V linear regulator, that is probably more like 10 µF instead of 1 µF.

The required range of output capacitance is a function of how the controller in the regulator is compensated. Both too high and too low can make different types of regulators unstable. Some regulators require a minimum resistance in series with a capacitance of a certain range. You have to read the datasheet for your particular regulator carefully and see what it needs.

The 78xx series regulators are very stable and are generally tolerant of large output capacitance. I'd put a 1 µF ceramic there unless you really need something else according to the datasheet. 1 µF is fine for every 78xx variant I've encountered so far.

As for how capacitance values are written, that depends on how old fashioned the writer is. In engineering, we want 1 to 3 digits left of the decimal point, then adjust the exponent of 10 in multiples of 3 to achieve that. This works nicely with the common power of 1000 suffixes, like Mega, kilo, milli, micro, etc.

Unfortunately, particularly for capacitance, there are still some cavemen around that just can't wrap their little Pleistocene brains around "nano". Instead of using the correct notation of "100 nF", they say "0.1 µF", or even worse "100,000 pF". A long time ago, pico-Farads were sometimes called micro-micro-Farads, and then abbreviated "mmF". Really old schematics will sometimes show "mF", and expect you to understand that means "micro-Farad", not "milli-Farad" as is the universal convention today.

So be careful when interpreting capacitance specs, especially from anything old enough to have tubes instead of transistors. However, never propagate the mess. Always write your values with 1 to 3 digits left of the point, with the appropriate power of 1000 suffix to achieve that.

The Nordic radio is low current and looks like ~300 ohm load but demands low noise on DC, probably < 25mV for Rx on fringe signals, and may increase error rate. But a radio immunity to noise varies with frequency. DC has wide immunity like 2.5 to 3.6 and 100kHz will be filtered inside but in between the PLL can track supply drift and correct if slow < 10Hz , so now you need extra LP filter for a radio above some frequency. the LDO acts as a small ESR like 25.V drop/ 500mA step = 0.02 Ohms but rises in frequency due to internal feedback gain dropping with rising f. While a load cap drops impedance with rising frequency the value of impedance compared to Zout of LDO determines the LP filter breakpoint where ripple attenuation begins. You may need to test the radio reception for fringe signals with noise on a supply from 1mV to 50mV or add at least 2 for "insurance" from 0.1uF & 10uF to reduce the rate of change of step regulation error slew rate so it does not degrade the Rx error rate .

Not the answer you're looking for? Browse other questions tagged capacitor electrolytic-capacitor ceramic 7805 or ask your own question.

4
LM7805 followed by LD1117-3.3
8
How to select proper capacitors and capacitance for LM78xx voltage regulators?
0
Unusually high ESR of cheap ceramic capacitors
0
Electrolytic Capacitor Tolerances
0
Need help to design voltage regulator circuit with LT1959
0
Regulated power for radio module HM-TRP. Is config correct?
1
How many capacitors are needed for a step down circuit?
9
If temperature is not an issue, what can be said about the different ceramic dielectrics
1
Need help identifying capacitor values from monitor PCB