I have the following schematic of a Zener based noise source:- 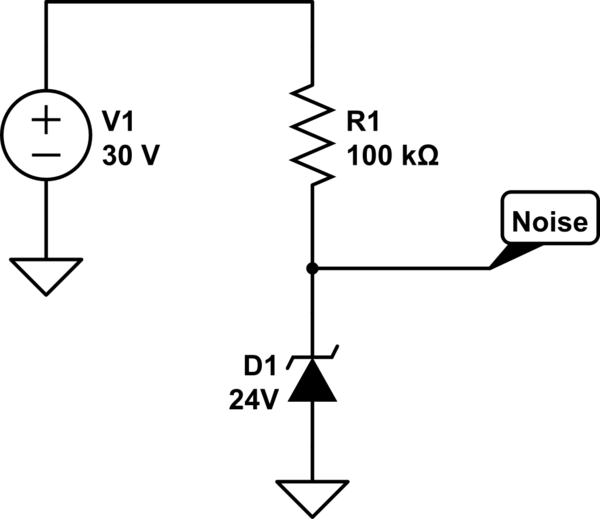 When built, an oscilloscope reveals a saw tooth noise signal at the "Noise" node, like:

The time base is 1us/div. Can anyone explain why the signal is saw tooth shaped? Initially I expected a triangular, or even sine shaped wave form. I think that it's something to do with the impedance of the Zener in conjunction with the much higher 100 kOhm resistor. The electrons cascade freely across the junction, but the resistor restricts current flow when the avalanche stops. We're talking 60uA. The result being slower charge build up than when current flows during avalanche.

This wave form isn't particular to my set up. There are other examples elsewhere on the Interweb when people have really zoomed in on the signal, one being https://youtu.be/CAas_kbTW3Q?t=714. Also there's a good chart here showing the rising edge to be slightly curved. It's probably unfamiliar as it's usually shown with a much slower time base. Am I right about the resistance/impedance explanation?

Consider that you effectively have this: 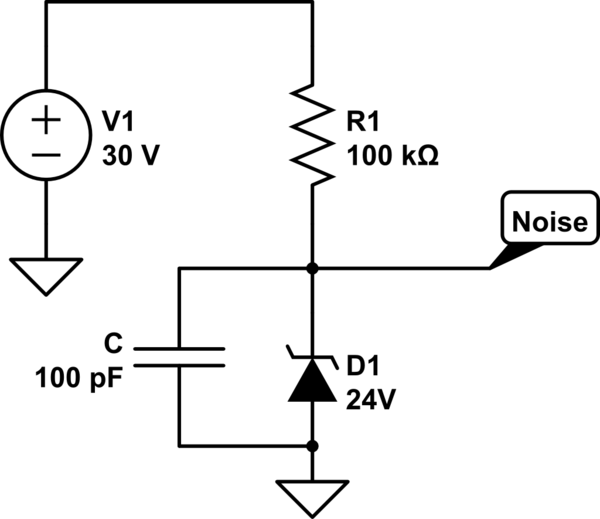 where C is the junction capacitance, plus any external capacitance (leads, breadboard, etc). Some of the current from R1 leaks through D1, but the rest charges C. Once the voltage reaches a certain level, avalanche breakdown occurs and current flows from C until the avalanche stops. Then the current begins charging C again.

To calculate C you first need to know the leakage. Decrease V1 until the noise disappears. Then measure the current. Then increase V1 back to 30V. Measure the rising slope of the noise dV/dt. Measure the average value of V. The current through R1 is approximately constant at (30V - V)/100kohm. Subtract the leakage current from this, then use I=C dV/dt to calculate the capacitance.

The random discharges near breakdown are from random crystal dielectric charges breaking down under a high E field producing a pulse current that drops the voltage with an RC fall time. If you could measure how small the fall time was , you could estimate the size of the C in that charged particle.

If I guess each particle sees at least 50kV/mm or 50V/um or 50mV/nm so the charge size may be about 10 to 20 nm to get 500 to 1000 mV. This can be scaled according to the epixtaxial particle sizes in the Si crystal lattice.

Like a Unijunction oscillator except with random thresholds in a limited range, the C charges up and the Zener voltage collapses rapidly 1~5% just below the breakdown threshold at very low currents.

From looking at the waveform I expect the rise/fall time ratio to be ~ 100 or less in this sawtooth.

Not the answer you're looking for? Browse other questions tagged zener waveform avalanche-breakdown or ask your own question.

7
Zener effect and Avalanche effect
3
Avalanche diode random source design
3
Tuning BJT avalanche noise
9
Noise Model for Zener Diodes
4
Is the avalanche effect in Zener diodes a quantum mechanical process?
5
Why IR remote waveform is a saw-tooth or am I measuring it wrong
2
Reduce Noise Added With Zener Clipper
4
What is the explanation for the shape of the Zener avalanche effect?
0
Why does this Zener diode circuit not produce the Zener voltage?