I'm looking at an LPC812 Cortex M0+ microcontroller and its GPIO functions. On a PIC microcontroller, one would always set the LATch prior to changing the direction of a given pin. This avoids the possibly nasty situation where a pin "gitches". ie: the output state of the pin is a 1 just before you change direction and set it to a 0. This results in a pin output changing from 1 to 0 over a sub-microsecond duration. (related: Why set PORTx before TRISx?)

However, it is not obvious from the user manual (UM10601) whether writing a value to a pin which is currently an input has any logical effect (it will not have a physical effect on the pin state as it's an input). Thus if I write a zero to PIN0 (page 92/93) that should in theory clear all the output bits. If they were latched, which isn't certain.

Section 7.7.2 says that "If either or both of these conditions (ie: set to gpio and set to output) is (are) not met, writing to the pin has no effect.". Which isn't helpful as I know there's no physical effect.

Under the IOCON description (6.3, page 68) is the following Remark:

In my opinion this is an incorrect sequence (unless the GPIO port outputs defaults to low, something else that isn't documented). On a PIC16 I would set the HI/LO state first, then change the direction.

I admit that if the part had arrived I would just test this on the bench. However I'll put this on stackexchange as I'm seeing examples everywhere which set direction and then the value, all of which may be glitching output pins.

You're over-analysing this. There are two registers involved in a GPIO pin, the output data register, and the direction register. Both of these are writable at any time (and I agree your Section 7.7.2 quote does not make this super-clear.)

The remark on p68 doesn't care about a transition, it cares about a power-optimised stable end state. Changing the order makes no real difference, but is cleaner as you describe.

There is no changing from 1 to 0 over a sub-microsecond duration. When you enable the output, it takes the driven value in just the same way as if you drive it from 1 to 0 using the data value.

It is only when the reset data value is 0, the tri-state is pulled up, and after enabling the output you write 1 to the data pin that you would see a pulse.

All peripherals are different, but for example

However, it is not obvious from the user manual (UM10601) whether writing a value to a pin which is currently an input has any effect.

It has not. See output enable in schematic below.

In my opinion this is an incorrect sequence (unless the GPIO port outputs defaults to low, something else that isn't documented).

They want you to enable the strong pull-down. The order does not matter, since it was already floating anyway. (see reset value of IOCON/GPIO registers) 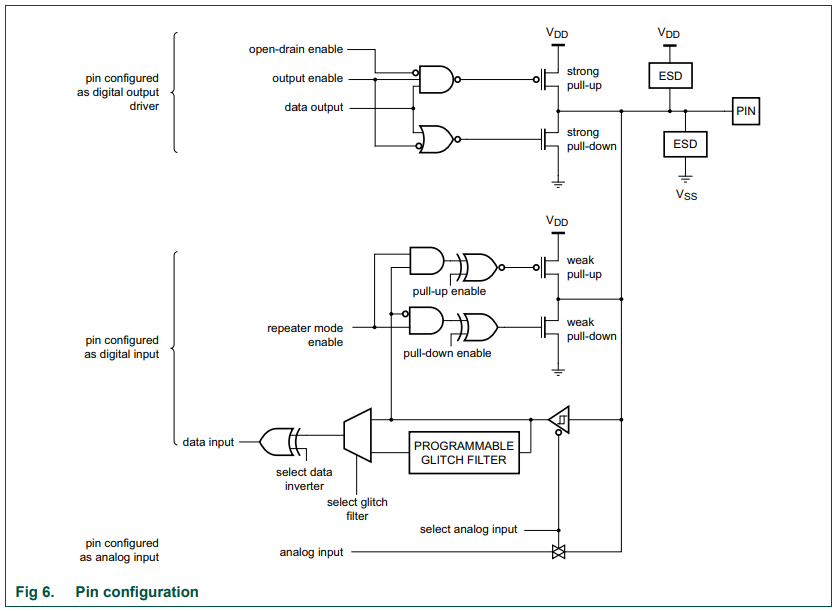 Not the answer you're looking for? Browse other questions tagged gpio lpc cortex-m glitch or ask your own question.

0
How does a stm32f chip set its GPIO speed? (hardware, not register setting)
0
Why does my LPC812 require PIO0_1 to be tied to ground?
8
What actually happens when we set direction on GPIOs in controllers ?
1
Can a pin be GPIO output and input at the same time?
1
Microcontroller (lpc1347) RMW operation
3
FPGA - Is it possible to change the pin direction/type during runtime?
0
Understanding atomic writes to GPIO on different ARM Cortex-M's
2
Command Line GPIO Access - Pin Types (Orange Pi)
1
Voltage to GPIO pins
1
MCU GPIO input pin state copying/buffering as another pin output in real-time?