I'm trying to get my head around transistors and I had some difficulties to understand the various way we can connect a transistor.

For example, here are a few possible arrangment:

The difference I see is that on the left, when the transistor is in cutoff state R1 and D1 aren't affected by a voltage drop through the transistor unlike the schema on the right.

Here the arrangement at the top is capable to supply 15v to the gate of the mosfet but the arrangment to the bottom can't barely supply more than 2v according to the simulation.

The question might be a bit vague, but what I'm really interested to know is if there is a list known pattern for transistor arrangement and their pros/cons?

For example, there is the darlington transistor which is pretty much like my last schematic but it seems it doesn't work if you want to amplify the voltage output for a mosfet using a transistor. In my examples, I used a clock but had in mind an output pin coming from a mcu.

For example, I saw on stackexchange someone recommending this kind of pattern: 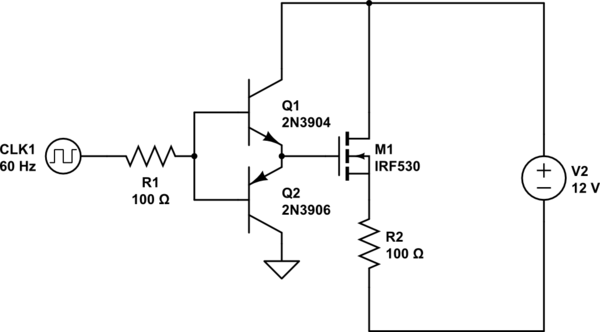 To drive a Mosfet, yet in this particular example, doesn't seem to work in my case. Actually it looks like half of an H-bridge.

Also, in my particular examples, all of the collector have a 12v applied and driven with a 5v logic on/off.

This is not an answer at this stage but merely shows a few problems with your understanding.

You are missing the power supplies on your schematics. Add them in.

Figure 1. (a) The LED is always on. When Q1 turns on it short circuits the supply and probably burns out. (b) This will work but the emitter will be about 0.7 V below whatever voltage is on the base.

Figure 2. (a) M1's gate is permanently connected to 12 V via R3. Q1 does nothing for it. (b) With a 5 V clock signal the emitter of Q3 will reach < 5 V. This might turn on M3 a little but once current flows the voltage on R8 will rise, reduce the voltage and turn it off. If the clock signal voltage was high enough you could turn on M3 but without a discharge path M3 will probably never switch off.

Figure 3. The Q1 and Q2 parts are OKish but having M1 on the high side of the load will prevent it working properly.

Also, in my particular examples, all of the collector have a 12 V applied and driven with a 5 V logic on/off.

In all except Figure 1a you are running the NPN transistors in "emitter-follower" mode the emitter will follow the base voltage minus about 0.5 to 0.7 V because of the base-emitter diode voltage drop. You will never get the emitter above about 4.5 V so most of your circuits won't work properly, if at all.

The difference I see is that on the left, when the transistor is in cutoff state R1 and D1 aren't affected by a voltage drop through the transistor unlike the schema on the right.

Figure 4. (a) All that is required is to shunt the LED current. R4 then limits the current to slightly more than when the LED is on. With the transistor turned hard on (note addition of base current limiting resistor) there will be about 0.2 V across Q1.

I'm really interested to know is if there is a list known pattern for transistor arrangement and their pros/cons?

What you are asking is for transistor circuit topologies. I had a look around for a good one but drew a blank. My old The Art of Electronics by Horowitz and Hill gives many examples.

Since you are into patterns, let's discuss a few.

There is the pattern of an LED, where the voltage source might be anything. 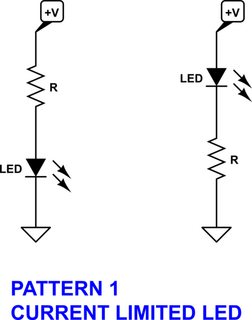 In this design pattern, you only need to calculate the value of \$R\$, knowing the intended LED current, intended LED voltage at that current, and the voltage of the supply (or the voltage difference between the two nodes at top and bottom.) Here the equation is:

The choice as to which is first, resistor or LED, doesn't matter. The pair makes up a functional block.

Then there is the pattern of an MCU controllable series switch.

Here, you have the options of using a BJT or MOSFET for the series switch. The use of the series switch means that either the circuit is enabled or disabled, but not bypassed (see later.) Note that the switch is either on the "low side," meaning it is attached to ground and when enabled connects the load to ground when enabled; or else it is on the "high side," meaning it is attached to the (+) power supply rail and connects the load to that supply rail, if enabled.

The value of the base resistor, when the BJT form is selected, is:

In this pattern, the first pattern of just powering an LED properly can be applied as the load. (The only issue being that the series switch itself has a slight voltage across it. So this added voltage must be subtracted from the earlier equation's numerator (for the LED current limit resistor) before calculating the resistor value. Usually, this isn't much of a difference, so the same resistor works fine.)

Then there is the pattern of an MCU controllable bypass (parallel) switch. (For this pattern, I'll focus on the low-side switching pattern discussed above. Similar, would apply in the high-side case.) 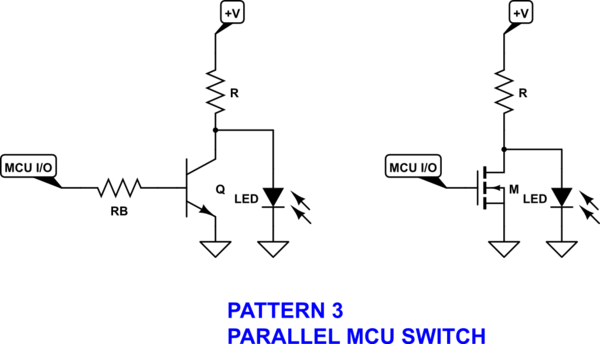 In this case, you must have a load that can be divided in half. Pattern 1 is such a load and shows up here split into two parts.

Here, the value of the base resistor in the BJT case is:

The use of the parallel switch means that the current that would otherwise go through the object of interest (the LED here) is bypassed through the switch, instead.

Note that in this case the current isn't turned off, ever. It either is allowed to proceed through the LED or else it bypasses the LED and goes through the switch. Either way, the current takes place. (In fact, since the switch often has a lower voltage across it than the LED, the resistor shown will actually increase its current when the switch is bypassing the LED.)

The main point here is that the transistor switch (BJT or MOSFET) must have a very low voltage across it, so that the load (LED in this case) won't have sufficient voltage across it to keep operating. An LED makes this easy, since both BJTs and MOSFETs, used as switches, are easily able to essentially shut off the LED by bypassing it.

Note also that the sense of ON/OFF, relative to the MCU I/O control line is opposite to Pattern 2.

(The high-side switching pattern also applies for the parallel case here. But it also has the same limitations mentioned earlier.)

This only works in cases where you are operating this as a low-side switch pattern and where you have access to a voltage rail that is enough higher than \$V_\text{CC}\$ for the MCU. (Several volts higher, at least.) In this case, you can attempt the following: 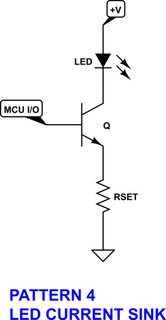 Here, the \$+V\$ rail must be at least the LED voltage above \$V_\text{CC}\$. But in this case, the value of the resistor is computed as:

There are a great many additional patterns that can be built upon these. (For example, Pattern 4 can be used in a high-side switch form if there is access to a sufficiently negative voltage rail.) And the above patterns have problems in special circumstances, such as when used at high frequencies or large currents. Each one has a limited range where it may apply. But I thought I'd provide some basic ideas here that you may be able to relate to what you've seen before.

Not the answer you're looking for? Browse other questions tagged transistors circuit-design or ask your own question.

2
Bypassing Transistors with a Switch, problems?
0
NPN Transistor not working
2
Saving a resistor on an NPN transistor current source (sink) when driving LEDs
1
Switching a 3V led series with an Arduino uno with 5V supply
2
Inverter on npn-transistors - how does it work?
4
Why does this transistor circuit light the LED?
0
Transistor simulation not working properly in Proteus