Eliminating or reducing the red glow from IR LEDs at night

tl;dr; my question is simply this: is there a way to hide a bunch of IR LEDs (for a night-camera) so they don't get such a red glow at night?

Preferably not at the expense of the light output, but that would be ok too, if that's the only way.

Background (not-tl;did-r): I setup a baby cam for my son when he was born with a Raspberry Pi and a Pi cam with no IR filter so I could watch him at night. It has worked flawlessly and frankly I couldn't imagine parenting without it. He's now 1.5 years old, and sometimes wakes in the middle of the night and sits there talking to his stuffed animals.

Just a few days ago he seemed to notice the IR light for the first time, and now he'll be fine until his eye catches the light and he seems to get terrified and start crying once he sees it. At least, I assume it's what's scaring him (there's also an LED on the Raspberry Pi itself).

The light is more powerful than it needs to be, I believe it's a 48-LED cluster, so if a solution involves dimming the light, it would probably be fine. I was thinking about putting it in the opposite corner of the room, but keeping the camera above him, but I think the slats from the crib would block much of the light and it would be very shadow'y. And I'm not so sure that would keep him from seeing it.

I was thinking maybe some sort of plastic (acrylic) plate or filter. I'm not sure.

Edit, here's a pic of the setup. This is an older pic of an older IR light that I got from Ebay. Half the LEDs burnt out within about 3 or 4 months. It's since been replaced by another cheap Ebay one, but same basic setup. I'm definitely open to moving things around so it's not so... "in yo face!" 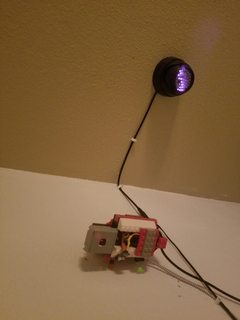 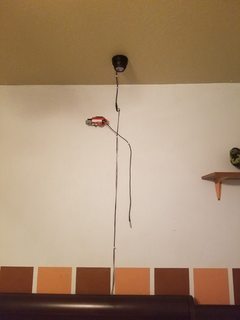 The answer about shifting the wavelength of the IR away from 850nm is good, however check if your camera has an IR cut filter fitted as 940nm may not work.

You could try PWM the LEDs above 300Hz where the human eye can't see them flicker which would reduce the overall perceived brightness.

Acrylic will just diffuse the light and soften it, won't really reduce it much.

Actually, polarizers are good filter for this case. Buy a sheet from amazon ~$12, cut it and stack that 90 deg. It blocks visible light (red glow) and allow near infrared to pass.

Remember not to block the camera if your led is right next to it.

In my case it works really well though you still see a tiny bit in pitch black room. My baby doesn’t stare at it anymore anyway.

Not the answer you're looking for? Browse other questions tagged infrared camera or ask your own question.

33
If Infrared not visible, why the red LEDs?