I have set up the following circuit in order to measure current. 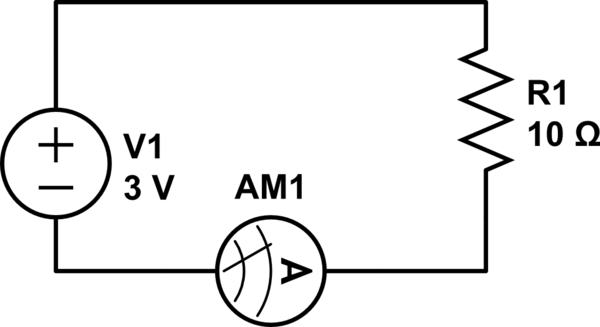 However, my meter shows me a value that is much smaller? Actually, it's about half that at 157.7mA 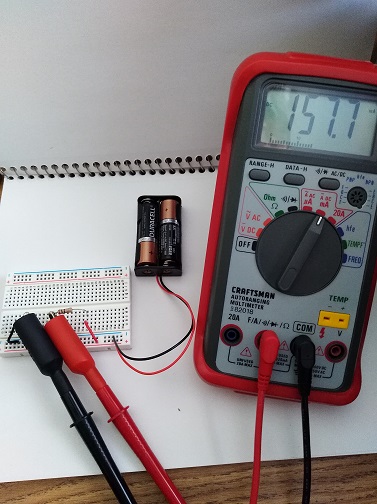 Since I've tested my battery voltage and it is 3 to 3.01 volts I'm assuming it is fine. I also tested the 10Ohm in resistor with the meter and the meter measures it at 9.8 to 10 Ohms which seems correct.

But I still have a few questions.

*I know this is somewhat ridiculous because once you know, you know. However, I'm attempting to teach Ohm's law to early electronics students and attempting to show them that the meter will confirm their calculations.

EDIT Because there were some questions about my initial voltage measurement I did some more investigation.

My original voltage measure was on the two AA batteries with no load. I then measured approx 2.2 volts across the 10 Ohm resistor in my circuit. I'm assuming that would mean something like:

However, I know when I measure that I only see 157mA of current. So...

I plug in the missing 63 in the following way:

So I'm still seeing a extra ~12 Ohms that I can't account for. That is obviously higher than my 9-10 Ohm extra I was calculating but could be due to rounding.

Does this add some additional valuable information? I think so. 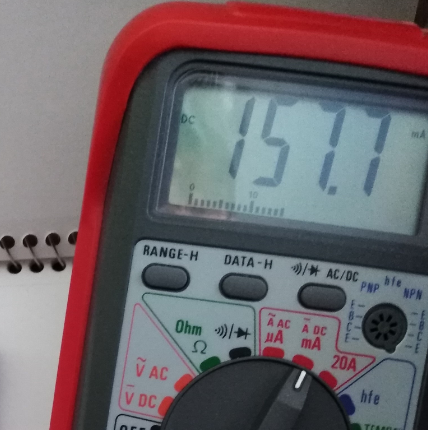 I was directed to the following YouTube video and it contains the best explanation of the phenomenon that I am seeing.

What is ammeter burden voltage, and why you should care (YouTube)

My extra tests seemed to back up the idea in the video (that the meter's internal resistance is around 9-10Ohms).

Specifically when I measured the voltage during load across the 10 Ohm resistor and got 2.2V.

However, I know when I measure that I only see 157mA of current. So...

I plug in the missing 63 in the following way:

The point here being that I still have ~10-12Ohms of resistance I can't account for (which are assumed to be in the meter itself).

Another poster pointed out a special port on my meter (marked 20A) which has a smaller burden (around 1 Ohm). I plugged my positive probe into that port and I measured 270mA on the circuit -- very close to the 300mA I was expecting. 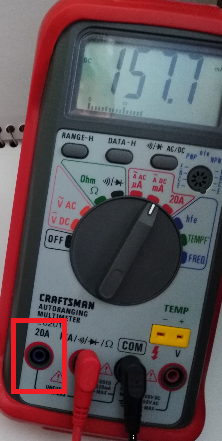 In answer to my other questions, the video also shows the meter data sheet items that will show the internal resistances when purchasing an multimeter.

I kept raising the resistors (but continue to see the extra ~10 Ohms of resistance). For example, I just put a 330 Ohm resistor and measured 8.81mA of current. If I calculate the value using Ohm's law I get:

If I adjust my calculation considering that my meter is causing an additional 10 Ohms of resistance I get almost the exact value that I saw when I measured.

There was also some question about whether or not the AA battery could even provide 300mA of current due to internal resistance and I wanted to close the loop on that.

I looked up the duracell AA datasheet and although it does not specifically state max current the battery can provide it does show the following graph: 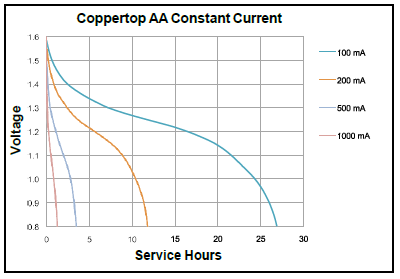 You can see that they do show it providing up to 1000mA (1 amp) of current for a little over an hour so I believe from this we can infer that the battery can actually supply current at these higher levels (300mA and more).

Since you have a 200mV range with 0.1mV resolution.

If you need to measure 200mA full scale with a 1 Ohm shunt, this will work better. I'm a bit surprised it doesn't have that, but then it is a cheap meter.

I would expect 1 to 1.5 Ohms for most meters in this range.

The picture shows the meter in AC mode. You’re measuring a DC current. Some meters, maybe this one, will measure 0.7 of the true value when used this way. That might explain the 157mA vs 220mA discrepancy.

Your batteries probably can’t provide 0.3A at full voltage.

Take out the ammeter (so it’s not at issue) and see what voltage you have when the resistor is connected. I expect it will be about 1.6V or so.

AA cells are usually used with 50mA or less draw. You might get better results with C or D cells.

Not the answer you're looking for? Browse other questions tagged resistance current-measurement multimeter or ask your own question.