My plan is to have 3 groups, each containing 6 cells in parallel. These groups are then placed in series to make 12v DC, which will then be stepped up to 220v AC. Each group is removable from the circuit and is charged independantly. Each group also has its own TP4056 soldered to the battery holder - this isn’t removable. This is so i can have 2 parts charging at the same time, since i have a few micro usb’s. This cuts down charging time significantly.

Notes: - The batteries I’m buying are capable of such high discharge rates, so this isn’t an issue. - This is also very expensive, i know - Alternative to the removable sections is using a switch, but I’d rather they be removable.

My questions are: 1. Any problems with this idea? Any improvements or changes to the type of battery recommended? 2. What happens if I didn’t remove one section when charging, i left it in the circuit, with the other packs also there (the other packs are not being charged)? 3. What if I, again, left all the packs in the circuit, but this time all three are plugged to the power simultaneously while in the circuit. 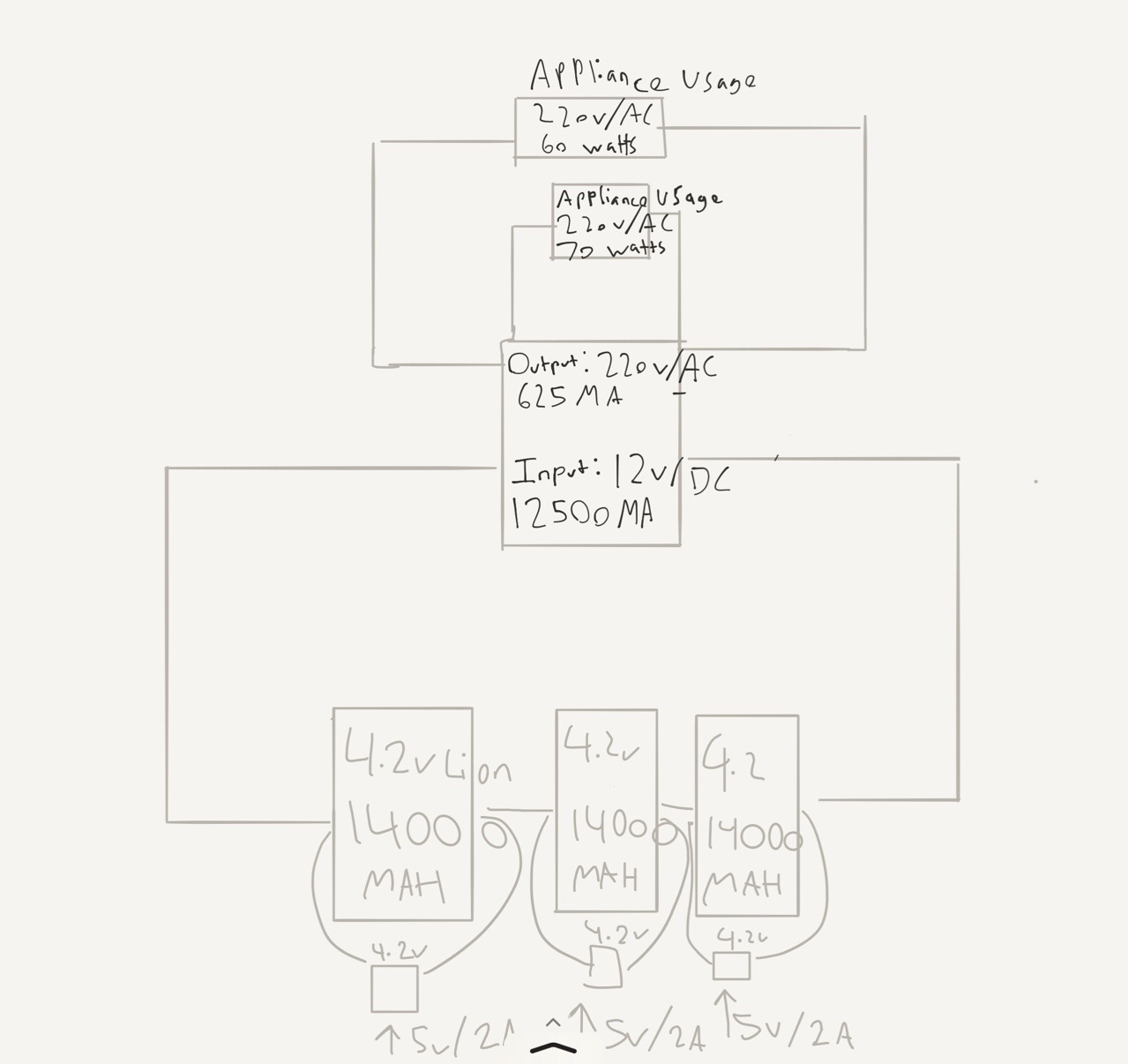 The inputs drawn are for question 3.

Edit: I have placed diodes in the circuit as shown in this picture: https://myfunwhispers.tumblr.com/post/171651819540 . Will this now allow me to have all three inputs plugged in simultaneously, or will a short circuit still occur? 2.Also, considering that the transformer has no current protection, i should add a fuse @12.5 Amps somewhere after the batteries, shouldn’t I?

If you use separate isolated 5V supplies (like cellphone chargers) to charge each battery, then this will work fine.

If there is one 5V source, and you connect all 3 batteries to it, then the batteries will be shorted through the power & ground wires, and something will burn.

This isn't the most usual or efficient way to do it, but it should work. The usual way would be a CC/CV balancing charger. But if you always charge all the batteries (don't forget one!) they should be properly balanced.

3
Are “wider” battery packs less at risk for polarity reversal?
8
Charging Li-ion batteries in parallel
0
Charging 15 AA battery Pack
4
What are the technical specifications of Tesla “cell level fuses” one fuse per cell
1
Is there an IC that can charge multiple NiMH batteries at once?
1
Can I wake up a sleeping Li ion battery pack without dismantling it?
0
Batteries in parallel and series. Auto disconnect load while charging
1
Charging Multiple 3S Lithium Ion Packs Together
3
IATA battery rules