According to this article (and a lot more published today on the same topic), Kosovo electricity net production balance has decreased during the last weeks.
This has led to a small deviation of the European network’s frequency (from 50Hz to 49.996Hz). In turn, this frequency deviation led to some electric clocks (like ones in ovens) being out of sync (up to 6 min since January).

How a decrease in electricity production can lead to a decrease of the frequency on the grid on the long term? Isn't the frequency a parameter controlled by the power plant at the end of the day?

Answered before: Why do generators have to rotate at a slower frequency if demand outpaces the supply?

If the loss of power from some countries causes a frequency deviation, shouldn't we also observe other impacts, like a drop of the output voltage? This means we've also been experiencing a drop of voltage for weeks here in Europe?

frequency reduction is primary the means to regulate, not voltage. But, yes, you'll see some amplitude (envelope) variation.

Why some electric devices directly use the network frequency to sync their clocks, instead of a quartz crystal technology? This means the same oven needs 2 different firmwares for countries with different electric network frequencies, while, with a crystal (that should be needed anyway to run all the embedded circuits), the same device would run unmodified everywhere.

Now coming to the relevant question:

Nope, these won't have firmwares the way you think. Also, you can't sell 100% the same oven in countries with different grid frequencies, anyway, because 60 Hz countries tend to use different grid voltages.

These clockkeeping circuits will more look like zero-crossing detectors (that is, a very minimal comparator with a cap on one input, fed directly from the power line, most likely through a resistive voltage divider) and counters, feeding a very minimalistic dedicated clock IC. We're talking low-tech here. Things produced in the millions where using a decades-old ASIC is cheaper than using a quartz + microcontroller.

Also, notice that with a minimal amount of additional complexity (an RC filter) it would be relatively easy to figure out whether you're running on nominally 50 Hz or 60 Hz, so not even your "needs to be different for different grids" argument works!

From the Reuter's article referenced:

SARAJEVO, March 7 (Reuters) - European power grid lobby ENTSO-E urged Serbia and Kosovo to urgently resolve a dispute over their power grid, which has affected the broader European network, causing some digital clocks on the continent to lose time. 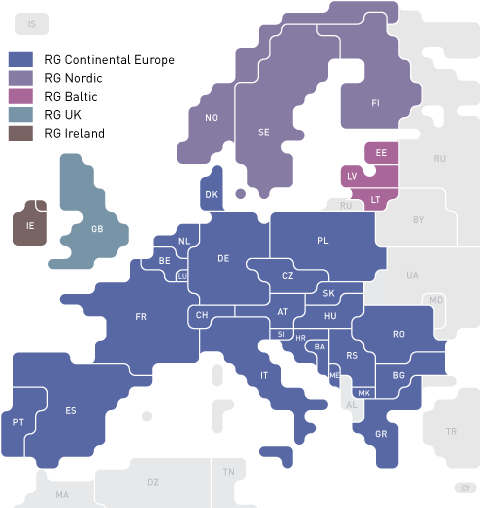 The European grid shares power across borders. AC grids have to be kept 100% in-sync if AC connections are used. Britain and Ireland, for example, are connected to the European grid by DC interconnectors so each nations grid can run asynchronously with the rest of Europe whilst sharing power.

The grid shared by Serbia and its former province Kosovo is connected to Europe’s synchronized high voltage power network.

ENTSO-E, which represents European electricity transmission operators, said the continental network had lost 113 gigawatt-hours (GWh) of energy since mid-January because Kosovo had been using more electricity than it generates. Serbia, which is responsible for balancing Kosovo’s grid, had failed to do so, ENTSO-E said.

The energy hasn't been lost. It was never produced.

According to NetzFrequenzMessung.de (you might want to translate) the 113 GWh shortfall averages out to about 80 MW continuous on a total of 60 GW capacity. That's a 0.13%. The scary thing is that we're actually maxed out and can't find an extra 0.13%!

The loss [sic] of energy had meant that electric clocks that are steered by the frequency of the power system, rather than by a quartz crystal, to lag nearly six minutes behind, ENTSO-E said.

"Steered" is probably a mistranslation. "Regulated" would be better.

Many digital clocks, such as those in alarm clocks and in ovens or microwaves, use the frequency of the power grid to keep time. The problem emerges when the frequency drops over a sustained period of time. 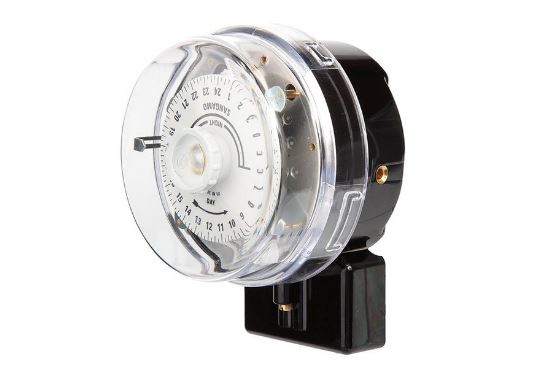 Figure 2. An electro-mechanical timeswitch of the style popular with the utility companies.

Analogue, motorised clocks do too. The day / night clock on my electricity meter is > 40 years old and it has a mains-powered clock with a self-rewinding clockwork UPS to keep it OK during power cuts!

ENTSO-E said the European network’s frequency had deviated from its standard of 50 Hertz (Hz) to 49.996 Hz since mid-January, resulting in 113 gigawatt-hours (GWh) [sic] of lost energy, although it had appeared to be returning to normal on Tuesday.

The frequency is not held constant to three decimal places for months on end. That might be an average figure. Here's the data for the last five minutes: 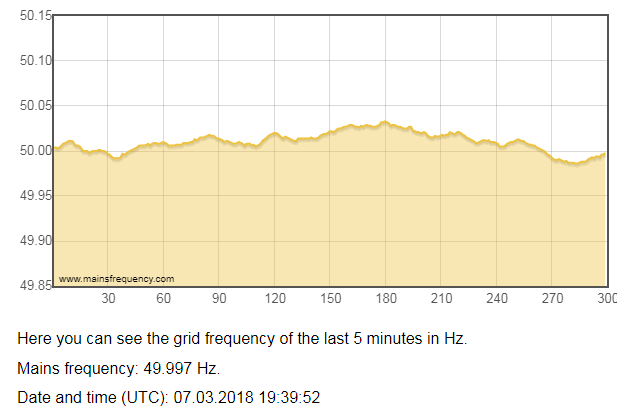 Figure 3. Note that frequency deviation will be much wider over a longer time period. Source: MainsFrequency.com. 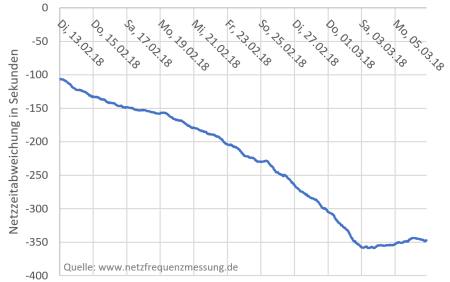 Figure 5. [WOW!] In our previous measurement operation (July 2011 to 2017), network time deviations of ± 160 seconds occurred (June 2013). But since January 3, 2018, the network time deviation is continuously decreasing. Changing the setpoint for the secondary control power on January 15 from 50,000 Hz to 50,010 Hz has not yet been able to reduce the mains time. Source: MainsFrequency.com.

“Deviation stopped yesterday after Kosovo took some steps but it will take some time to get the system back to normal,” ENTSO-E spokeswoman Susanne Nies told Reuters. She said the risk could remain if there is no political solution to the problem.

If they start generating and feeding into the grid it will speed up.

The political dispute centres mainly on regulatory issues and a row between Serbia and Kosovo over grid operation. It is further complicated by the fact that Belgrade still does not recognise Kosovo.

“We will try to fix the technicalities by the end of this week but the question of who will compensate for this loss has to be answered,” Nies said.

This doesn't make any sense to me. Energy flow is metered and billed accordingly. Each country pays for their imports.

ENTSO-E urged European governments and policymakers to take swift action and exert pressure on Kosovo and Serbia to resolve the issue, which is also hampering integration of the western Balkans energy market required by the European Union.

“These actions need to address the political side of this issue,” ENTSO-E said in a statement. The grid operators in Serbia and Kosovo were not immediately available to comment.

Kosovo seceded from Serbia in 2008. Both states want to join the European Union but Brussels says they must normalize relations to forge closer ties with the bloc.

Serbia and Kosovo signed an agreement on operating their power grid in 2015. However, it has not been implemented yet as they cannot agree on power distribution in Kosovo amid conflicting claims about ownership of the grid, built when they were both part of Yugoslavia. (Writing by Maja Zuvela; Editing by Susan Fenton)

I guess neither of the above are electrical engineers.

If demand is approaching peak capacity then we have to let either the voltage or the frequency droop if we wish to avoid disconnecting customers. Dropping the voltage will cause problems with certain loads and is to be avoided.

The Reuter's article fails to explain why the system average frequency has been low for so long. It can only be that it hasn't been able to run above 50 Hz for long enough to catch up. Off-peak seems the time to do this but there will be an upper limit on the frequency deviation - about 50.5 Hz (but I don't have a definite number).

No, we reduce frequency to avoid the drop in voltage.

They don't sync the clocks in the sense of adjusting or correcting the time. They maintain synchronisation by keeping the average frequency at exactly 50 Hz. One reason for this is the millions of electro-mechanical clocks in service. These are fantastically reliable, don't require batteries and do the job. Why replace them?

This means the same oven needs 2 different firmwares for countries with different electric network frequencies, while, with a crystal (that should be needed anyway to run all the embedded circuits), the same device would run unmodified everywhere.

Crystals will drift and the further complication of real-time clock with battery backup are required. Electrical utilities work on timescales of 20 to 50 years. How long do you think the electrolytic capacitors in your digital clock will last?

NTSO-E has now confirmed with the Serbian and Kosovar TSOs, respectively EMS and KOSTT, that the deviations which affected the average frequency in the synchronous area of Continental Europe have ceased.

This is a first step in the resolution of the issue. The second step is now to develop a plan for returning the missing energy to the system and putting the situation back to normal.

Hmmm! They're referring to it as "missing energy".

How can a decrease in electricity production lead to a decrease of the frequency on the grid on the long term? Isn't the frequency a parameter controlled by the power plant at the end of the day?

You can think of the electricity grid as being like a giant mechanism. Induction motors are like belts that can slip a bit. Synchronous motors and generators are like gears that cannot slip.

Eventually if the grid frequency gets too low then the grid will start dropping loads to prevent a complete collapse.

It seems that the political issues resolve around who should pay the power plants to increase their setpoints. If no one pays then the grid frequency remains reduced (and all the conventional power plants end up generating slightly more than they were contracted to generate).

To answer the "Why not quartz?" question:

Crystals are actually pretty terrible even for short-term timekeeping. A nice crystal on Digi-Key will typically have about 20 ppm accuracy.

But you probably won't have a nice crystal. Nice crystals don't sell consumer products. For example, the crystal in my wristwatch is about 66 ppm fast:

So after 12 days the watch is off by 1 minute. After a month it's off by ~2.5 minutes. 5-10 minutes (2-4 months) is enough drift to start causing problems. And that's not including temperature drift.

The power line frequency might not be more precise on a time scale of seconds or minutes, but the number of cycles per day is usually well-controlled. That's why the European grid issues made the news.

Why do some electric devices directly use the network frequency to sync their clocks, instead of a quartz crystal technology? This means the same oven needs two different firmwares for countries with different electric network frequencies, while, with a crystal (that should be needed anyway to run all the embedded circuits), the same device would run unmodified everywhere.

Because it is cheaper and still reliable (even more accurate?) then quartz crystal. And particularly the entire European continent is running on the same electricity network. So you can sell your oven to that total number of customers. For other countries manufacturers would make different versions anyway. There aren't many items that are sold everywhere (in every country) exactly the same.

Not the answer you're looking for? Browse other questions tagged frequency clock power-grid or ask your own question.

6
Just how accurate is the frequency of US Wall Outlets?
17
Why do generators have to rotate at a slower frequency if demand outpaces the supply?
-1
What may be the consequences of AC frequency variations on powerline network adapters

8
Is it true that the power line frequency is kept accurate by atomic clocks?
26
Why are clocks used in computers?
2
Interpreting Crystal Deviations
2
Grid tie inverter power factor
0
Connect a switching power supply to the EU grid
0
Video clocking: crystal or generator?
0
What is a node in a Power Grid