Specific color sensing, is it possible in an economical way, without using camera/image recognition?

While I understand that color sensing with camera and sufficiently powered processor running image histogram logic (or other such algorithms) can determine presence of certain colours fairly reliably.

However, are there other, significantly more cost-effective mechanisms to determine presence/absence of certain color (or it's close shades), at close range, using simpler/cheaper sensors and lower computational requirements ?

I am guessing that things like pH sensors, or other chemical sensors might use such methods. In my case, the application is such that I need to detect presence/absence of a specific colour (a shade of light blue), in a small area, at close range.

Edited: By 'close range' I mean something between 1-5cms, though this isn't a very strict requirement. I was thinking of "close" relatively, i.e. there is no direct irradiation from light source to sensor, kind-of a double barrel, such that only reflected light hits the sensor. So closeness is a function of physical sensor placement, and I am open to suggestions (including completely alternative / orthogonal approaches).

Since LEDs used as photodiodes are most sensitive to the colour they emit during normal operation, a basic colour sensor can be made using the LED in reverse and an opamp:

The circuit above came from this page. It can also be done the other way round - a much more detailed look at colour sensing using LEDs and light sensors is available here - this page details using a normal light sensor and different colour LEDs.

I couldn't find the app note mentioned in the comments, but this page seems to be quite a thorough treatment of the subject of transimpedance amplifiers. You can alter the bias across the LED to change response time/sensitivity.

If you want to detect a very specific color you'll need a narrow-band filter like this 11nm bandwidth filter by Edmund Optics. EO's products are really high precision lab stuff, and so is the price: 300 dollar.

If you can settle for less I would suggest to use a photographic filter will do as well. Use a phototransistor with a wide spectral sensitivity, especially in the 400 nm range, and compare the reading with and without blue filter. If the object's color is blue there will be less difference in reading than for a red object for instance. You'll have to take an offset into account as well, since the filter won't pass 100 % light, even if blue.

You can convert the photodiode's current to a voltage with a series resistor, or with an opamp transimpedance amplifier: 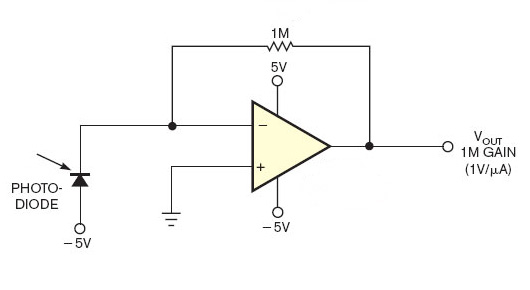 Note that the diode's anode has to be tied to a voltage more negative than the non-inverting input. I find a surprising number of circuits on the 'Net where the anode is connected to ground. But then, because the diode creates a voltage drop, the opamp can't regulate the output so that the inputs become equal and the output will saturate.

A very simple approach to determining the color of a surface is to use one photodiode or photoresitor and a number (3, for example, like in RGB) of LEDs of different colors to light the surface.

Then, in a time-multiplexing fashion, each of the LEDs is turned on by itself in sequence to light the surface, and the intensity of the reflected light is measured for each of them.

Example: If using three LEDs, one red, one green, and one blue, this will yield three reflection intensity values, one for each color component, which together, after possible normalization, will give a numerical approximation of the surface's color in some kind of RGB space (which depends on the specific wavelength distributions of the LEDs, of course).

(I will use the RGB-three-color example setup in the following for simplicity, but any number from 1 to n of differently colored lightsources can be used; the more different colors are used the more exact the surface's color may be determined.)

The principle is the same as in a camera's chip: The intensities of the red, blue, and green components of the incoming light are measured independently and the combination of the three intensities determines the color. In the camera, there is one photodetector for each of those three basic colors so that all three intensities can be measured at the same time. What makes this complicated is that three different sensors or three different filters are needed.

The proposal therefore works the other way around: Instead of filtering the light after it is reflected from the surface one can also 'filter' the light before it hits the surface; basically, for your perception it doesn't matter if you put on your blue-tinted sunglasses or if you use a blue light source and no sunglasses instead.

In every case, you will receive three intensity values, each of which determines the intensity of a certain part of the color spectrum. Each complete measurement thus yields a triplet (r,g,b) which determines the color measured. As in computer graphics, the triplet (0,0,0) represents complete darkness, black; (1,1,1) is brightest white, and any combination (r,g,b) where r == g == b represents some shade of grey. All other possible combinations identify a distinctive point in the RGB-space, defining the color measured. (0.5,0,0) is some medium red, for example, and (0.9,0.9,0) is some relatively bright yellow, etc..

Some random pages with 'hands on' on the topic:

There are a substantial number of ICs that will do this job with various degrees of capability. I'll break the range into 3 parts, but there are absolute hard and fast boundaries.

(1) At the bottom end are ICs with effectively a single diode sensor per colour, RGB filters and 3 channel output.
An example (not in stock at Digikey) is the Avago ADJD-S311-CR999

(2) Above that are small arrays of photodiodes with RGB filters and maybe also unfiltered cells. Example below.

(3) At the top end are full colour camera ICs at quite reasonable prices. Example below.

Simple and cheap - analog square wave output on R G B luminance channels.
For about $3.50 in stock in 1/s at Digikey - 24 or 64 photodiodes arranged into 4 interleaved groups - 25% each of R, G, B & Clear filters.
Pricing is for the larger IC. Datasheet here

Not the answer you're looking for? Browse other questions tagged sensor detection colour or ask your own question.

25
Does this photodiode circuit work?
0
LED as transmitter and photodetector in the same circuit?

1
Simple way to determine I/Q phase difference (positive or negative) without using FFT
20
Any better way to determine source of light by analyzing the electromagnectic spectrum of the light
2
Is it possible to make an LED turn on with an HC-SR04 without using an arduino? Only when an object is near it?
0
Reading a high rate (400 kHz) analog input with an ESP32 (or Arduino)