I am new to this information portal!

However, I have question regarding open drain.

I read that, in open drain mode, neither of the devices (slave/master) are allowed to drive the data line HIGH, they can only drive the line low, otherwise there can be cases where it may damage the controller as it may lead to shorting of the circuit. So in order to do this, when Master has to read the data being transmitted from slave, it changes the mode to HiZ mode and changes the direction to input.

But my query is let's say master has to transmit the data (say data is 0xA5A5) on the data line which is being shared by the slave also. In such case will it cause any problem if mode is being already in HiZ, port direction as output for transmitting data 0xA5A5.? (i.e while transmitting 0xA5A5 master drives the line high also while being in the HiZ mode). So that when Master has to read the data, then it has do no mode change nor direction change as it's already being in HiZ mode, so that slave can drive the line low.

When a chip drives a line, it forces the line to have a specific voltage by making a direct connection between the output pin and that voltage (in your case, either 5 V or ground).

When a pin is in HiZ mode, the pin is not connected to any voltage, and the line's voltage is determined by some other chip driving the line, or by the pull-up resistor. 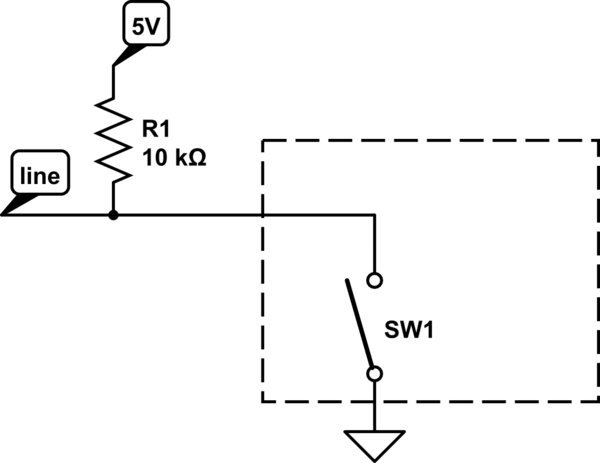 So it is not possible to output anything in HiZ mode; in HiZ mode, the chip does not (and cannot) affect the line's voltage.

You are essentially correct in the understanding that bidirectional Open Drain signaling works by having the devices at each end actively drive only in the low direction, and relies on something such as a pull-up resistor to establish a high default state otherwise.

Your question appears to be about what would happen if a master device "cheats" and drives the line in both directions during a time when the protocol says the master device should be transmitting: this may work, or it may cause bus collisions.

Many open drain schemes such a I2C make fundamental use of the way in which the electrical connection permits either party to hold the line low. For example, when an I2C master is talking, a slave may hold the clock line low to force delay; the master is supposed to see this, and wait for the slave to release the clock. Your hypothetical bi-directional driver would not be able to see this behavior of the slave, and would instead try to yank the line high while the slave is trying to hold it low, resulting in an electrical contention on the bus and most likely a failure of the transfer.

There is however, a related technique which can work. Some MCU GPIO pins cannot be configured for open-drain operation. So an alternate trick is to configure their data register bit to a "low" and signal by manipulating the direction control rather than the value: to signal an open-drain low the pin is made an output (driving low) and to signal a high it is made an input. This does work, and it also permits monitoring the state of the bus while it is released to high, to see if any other party is holding it low.

Not the answer you're looking for? Browse other questions tagged microcontroller port open-drain or ask your own question.