Aim is to use it as a power indicator, using a 3 legged bi-color LED (red=off, green=on), but I fail to see the feasability.

The red and green (separate) LEDS have already been switched and I understand the math to put the right resistors in. This much works! I'm lost when it comes to the bi-colour LED's common cathode.

In a model railroad I want to be able to choose between a traditional AC transformer (powersupply 1) or digital control (powersupply 2).

The switch (rotation) that I'm using for this has 2 separate channels:

I want both leds to always be on (either red or green). A simpler solution to only power the "selected" led wouldn't properly visualise which powersupply was selected in a when in the dark. Basically, a LED should be red, unless selected (powered) by the switch (=green).

The original scheme worked for me when using separate LED's for red and green, but when I tied the cathodes together to simulate a bi-color LED, powering green did not switch off red. The new scheme works for me!

To use Jasser's circuit with CC R/G LED you can do this: 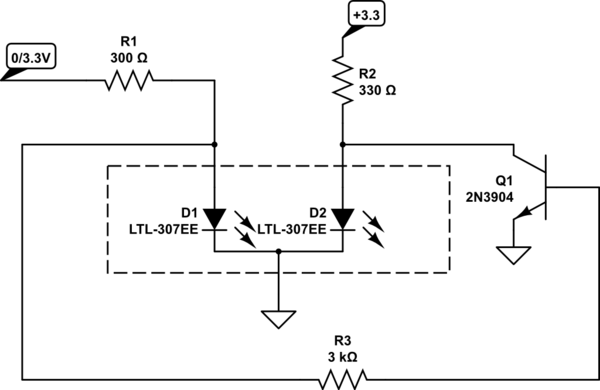 1
Use transistors for controlling two LEDs

1
Control RGB LED without microcontroller
0
SMD LED Perimeter Lighting with PWM for Dimming on each colour
0
how to turn only one led (from a bi-colour led package) ON at a time by using a mosfet
0
Toggle between two colors in a common-cathode RGB LED using a SPST switch
0
What is the best way to design voltage monitor with tri-colour LED?
5
Bi-colour LED resistor value
1
Representing AC sine wave with common anode/cathode RGB LED
3
Bicolor LED circuit help needed