I'm a neophyte here trying to learn using "Practical Electronics for Inventors, 4th Edition" (which received almost a 5 star review with over 500 reviews on Amazon). The preface of the book states "little to no experience" in electronics needed to understand the concepts in the book.

Alas, I'm struggling on the Theory chapter less than 20 pages in. When asked to solve the below questions. The book presents a few sentences which are relevant, but not enough for me to understand and solve the questions posed after.

The book states (and I believe I understand) the idea that Voltage is the measurement between two points usually provided by an absolute scale which is often set at 0 on the negative terminal (ground reference). This is at least true for the DC circuits discussed. The illustrations show (with enough clarity) an example of the V between the positive and negative of a single 1.5V battery, two batteries in series (3V), and finally an example of a split supply with a common return - a ground reference between the positive and negative leads of the two batteries. While I don't understand all the ramifications of this yet, I understand the basic explanation.

Several pages later the following questions are posed, along with the answers which I am having a lot of trouble following. I understand they are trying to show some examples that don't have a ground reference and/or that the ground reference is either at the positive or negative end, but lack of a walkthrough of prior examples is leaving me stumped. Furthermore there is a possibility based on this question that the book may be incorrect - which would be very disappointing as it is hard enough for me as it is.

Any insight into how to help me interpret these answers or clarification on the basic theory being illustrated below is appreciated: 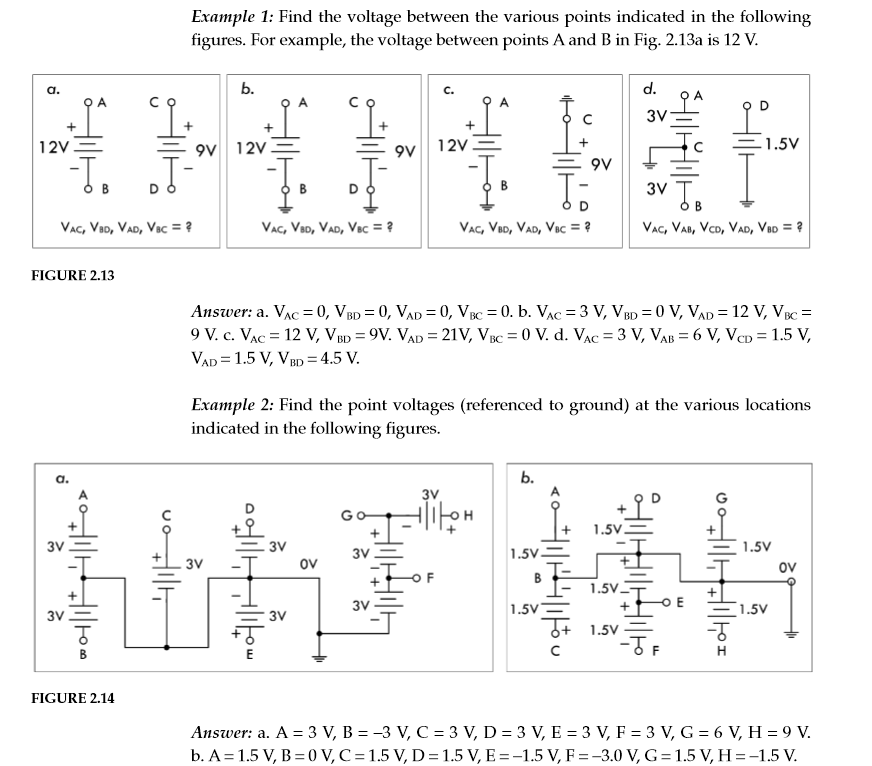 Why does Vac = 0? There is no connection between B and D. Connect a voltmeter of any practical input impedance between A and C to measure the voltage, and whatever the voltages were on those terminals due to stray capacitances (not shown in that diagram, so assumed to be zero), it will pull those points together, and move points B and D to whatever voltages are needed to get A and C at the same voltage.

If an infinite input impedance voltmeter was connected between A and C, it would not draw any current, and the voltage would stay at whatever it happened to be, due to charges on the capacitances of those nodes. As they're not shown, and the voltages on them are not given, not enough information is given in the question to determine Vac.

Why does Vac = 3v? There is a connection between B and D, they are both connected to the same node. The two grounds are drawn on the same schematic, so can be taken to be connected. That node happens to be 'ground', which means the node that we reference all other voltage measurements to, but it could just be another wire.

As B and D are at 0v with respect to ground, A is at 12v wrt ground, and B is at 9v wrt ground, so there is 3v difference between them.

I'm inclined to agree with the various comments that the exercise in the book was badly worded, though I struggle to find a good improvement at the noob level it's intended for.

In questions like this, if something is not mentioned, then you should assume it's negligible. No capacitances to ground are illustrated, so they should be effectively zero, so unable to hold those nodes at any given potential. However, the voltmeter is not described, so you should be able to assume it's an ideal voltmeter, which doesn't load the circuit at all. This will leave the measurement of Vac indeterminate.

If instead the question specified a voltmeter with some input resistance like 10Mohms, or asked for the current that flowed through a resistor of (say) 1Mohm or 1k placed between terminals A and C, then there would be no problem.

Not the answer you're looking for? Browse other questions tagged voltage schematics theory circuits or ask your own question.