I'm currently modding a 3D printer (Anet E10) by upgrading it's fan to a powerful 3.4A 12V fan. It's model is 9BMB12P2K01. The current layout on it's PCB does not allow such a powerful fan to be connected directly to it's designated MOSFET because it looks like it can't handle more than 1A safely. I can't take the motherboard apart to see the actual circuitry for the fan control. My assumption is that the CPU (Atmega2560) uses a PWM signal for the fan control.

The powerful fan in question requires a PWM signal on a special pin. Thus, my question becomes:

Your current fan is likely connected with a low side N Channel MOSFET driver as shown below: 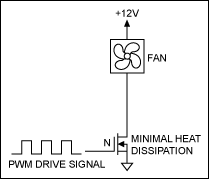 Fan PWM inputs are typically active low and pulled high internal to the fan. That way the fan runs at full speed when the PWM input is not connected. I could not tell from the data sheet if this is the case for your fan. If it runs at full speed with the PWM input floating and stops when you pull the PWM to GND, then it probably is. This is the general PWM info from the fan manufacturer.

Not the answer you're looking for? Browse other questions tagged arduino mosfet fan or ask your own question.